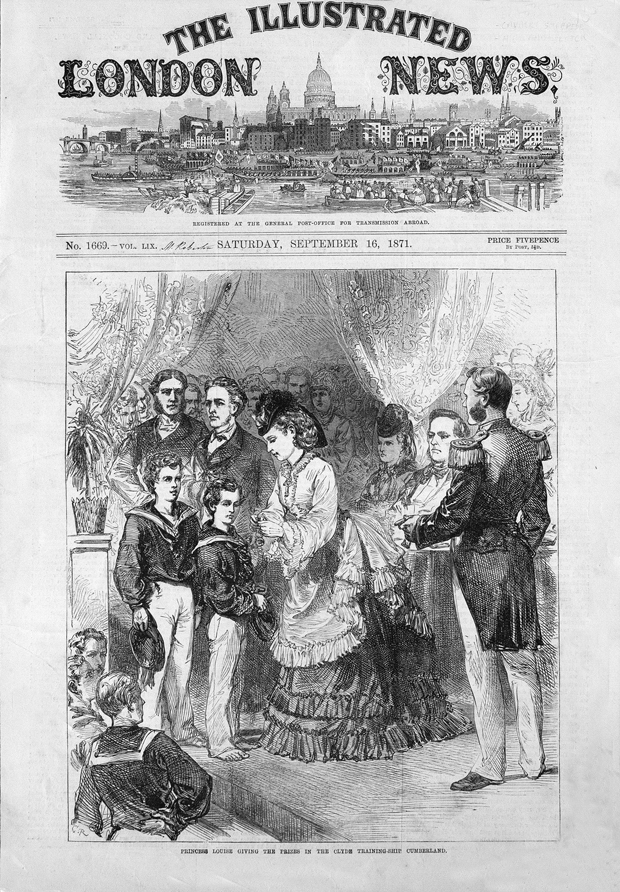 A VERY special prizegiving took place aboard the Training Ship Cumberland moored in the Gareloch in 1871.

Not only were the prizes presented by a daughter of Queen Victoria, Princess Louise, who spent much of each year at her Scottish home, Rosneath Castle, but also the event was pictured and reported on in the Illustrated London News.

HMS Cumberland, after which Cumberland Avenue in Helensburgh and the much older Cumberland Terrace in Rhu were named, was the first of two vessels operated by the Clyde Industrial Training Ship Association for the training of boys.

The association had the object of providing for the education and training of boys who, through poverty, parental neglect, or any other cause, were destitute, homeless, or in danger from association with vice or crime.

The Cumberland fulfilled this role from 1869 until 1889, when she was destroyed in a spectacular blaze, allegedly arson by some of the boys, and replaced by the TS Empress.

PRINCESS LOUISE IN THE SCHOOL-SHIP

The Clyde training-ship Cumberland, in Roseneath Bay, containing the poor boys of Glasgow, who there get the benefit of a good industrial education, was visited by her Royal Highness Princess Louise on Saturday the 2nd inst., as reported in our Court News last week.

The Princess, with the Marquis of Lorne, her husband, the Duke of Argyll, Lady Archibald Campbell, Lady Elizabeth Campbell, Earl Percy, the Earl of Shaftesbury and Ladies Victoria and Edith Ashley, Lord Lawrence, the Hon. A.Kinnaird, Sir Harry Parkes, Mr Shaw Lefevre, and others, came from Inverary in the mail steamboat Camel, which had been sent up Loch Fyne for this purpose on the day before.

The Camel bore the Royal standard, with that of the House of Argyll, and was greeted by H.M.S. Black Prince, which she passed off the Isle of Arran, with a special salute.

The course thence was between the Great and the Little Cumbraes, up through Fairlie Roads, crossing and recrossing the channel inside the Gantocks, and close to Dunoon Pier, standing up towards Strone, then across to Fort Matilda, where she received another salute of guns, passing Kilcreggan, up the Gareloch to where the Cumberland is moored.

The weather was fine, and the trip was very pleasant. The training-ship was prepared for the occasion. From stem to stern and from deck to topmast her rigging fluttered with many-coloured flags.

Alongside was moored a commodious landing-place, carpeted with crimson cloth, and communicating with the deck by a sloping gangway, over which rose a floral arch, surmounted with a sheaf of flags and a shield bearing the Royal arms.

On board arrangements were made for the reception of a numerous company of visitors. The upper deck, including the poop, was covered with a canvas awning. The bulwarks were draped with bunting set off with evergreens, while the enclosed space was enlivened with strings of variegated flags carried along from mast to mast.

At the sternward end a painted screen displayed the Scottish lion, flanked by armorial shields, and having underneath the legend “Welcome to the Cumberland.”

The Glasgow arms were fixed upon the mainmast; and at the forecastle end was a large shield, showing the Royal arms quartered with those of Argyll, with the words “Long live the noble pair.”

The floor was set with benches for the accommodation of visitors; and on the forward part of the poop were placed a table and circle of chairs for the distinguished company.

Over this reserved space, to which access was given by broad carpeted steps, rose a handsome canopy, supported on four pillars draped with muslin curtains, and consisting of a gilt cornice, from which hung festoons of flowers over a crimson valance, edged with yellow.

The company assembled on board included the Lord Provost of Glasgow, Mr Arthur; Sir James Colquhoun, Bart.; Mr Ewing, M.P.; Mr and Mrs Hanbury Lennox, and many of the neighbouring gentry and clergy.

Mr John Burns, of Castle Wemyss, president of the Training-Ship Society, and Mr James Galbraith, chairman of the managing committee, with Captain Alston, R.N., superintendent of the training-ship, conducted the Princess on board. She first received the gift of a Bible from the Scottish Bible Society, presented by Mr Kinnaird.

The boys, 350 in number, dressed in neat blue jackets and clean white trousers, gave her some hearty cheers as she stepped on board, and walked round the ship.

She was dressed in white, with a bright crimson underskirt, a black velvet hat, with crimson feathers, and primrose gloves. The band of the 90th Regiment played while she went round.

The ceremony of distributing the prizes took place under the canopy on the poop, where the Duke of Argyll occupied the centre chair, with Mrs Burns and the Princess at his right hand, the Marquis of Lorne and Mr Burns next to them; on the other side were Lord Lawrence and the Earl of Shaftesbury, with the other ladies.

The boys stood around by the bulwarks, and began the proceedings with a song.

Mr Burns spoke a few words to them, and the presentation of the prizes was then proceeded with, the lads coming up in succession as their names were announced by Captain Alston to receive their rewards.

For the senior boys there was a series of medals, awarded for Bible knowledge, seamanship, school studies, swimming, and good conduct. 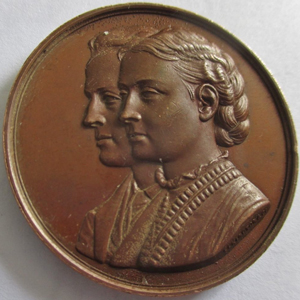 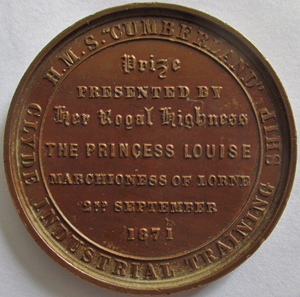 These were pinned by the Princess to the breasts of the successful competitors; and her Royal Highness afterwards distributed the clasp-knives and other articles which formed the prizes of the junior pupils.

This interesting ceremony concluded, the Marquis of Lorne addressed the boys, in the name of the Princess, and expressed her good wishes for their future welfare.

Mr Galbraith then presented to her Royal Highness, from the boys, an album containing all their photographs, which she graciously accepted.

Lord Shaftesbury next spoke to the boys, in a cheerful tone of encouragement and friendly counsel, telling them about the Thames training-ship Chichester, and the satisfactory behaviour and position of those who had left it.

Captain Alston thanked the Duke of Argyll for the facilities he allowed to this ship, lying off the shore of his Roseneath estate.

The Duke made a brief speech in reply; Lord Lawrence, on behalf of the visitors, spoke of the pleasure with which they had witnessed the proceedings; and Mr Lefevre, as Secretary to the Admiralty, made some remarks on the value of these training-ships to the service of the Navy, as well as to the mercantile marine.

The singing of the National Anthem ended the proceedings, and the Princess, with her husband and his family, went back in the steamer to Inverary.