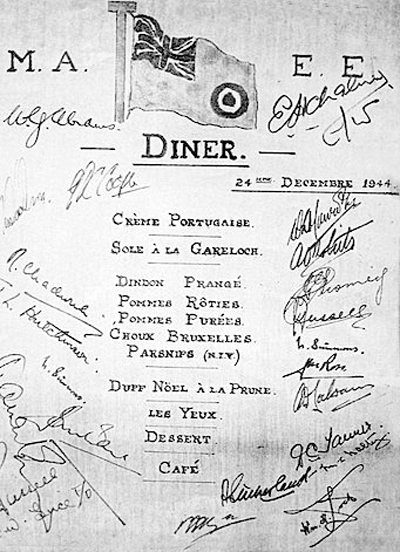 OFFICERS and senior civilian staff with RAF Helensburgh turned a wartime Christmas dinner into a French feast in 1944.

The officers mess for the Marine Aircraft Experimental Establishment was Ardenvohr, the requisitioned home of the then Royal Northern Yacht Club at Rhu.

Retired Merseyside newspaper editor Robin Bird, author of two books about MAEE, has given Helensburgh Heritage Trust the menu to publish for the first time, and he has also identified some of the diners.

While the names of the dishes spelled French cuisine the ingredients were basically fish, turkey, potatoes and vegetables with a flavour of cream or garlic.

For starters Crème Portugaise would have been a mix of cream, potato, onion and cabbage. Sole a la Gareloch was freshly caught sole.

The main dish was Dindon Prange Turkey flavoured with orange, carrot and spices. Pommes Roties and Pommes Puree were the roast potatoes and mash served with choux bruxelles and parsnips.

Boffins in attendance included senior technical officer J.L.Hutchinson, who had been at Felixtowe with MAEE before it moved to Helensburgh at the outbreak of World War Two.

In June 1924 MAEE had suffered its first fatality when Flying Officer E.E.P.Smith drowned after his Sea Lion aircraft crashed on take-off.

Hutchinson studied ways of preventing ‘porpoising’ following this accident — setting about solving the phenomenon with pen and paper in a mathematical study.

His research continued at Helensburgh as porpoising was a problem too for the larger flying boats such as the Short Sunderland. 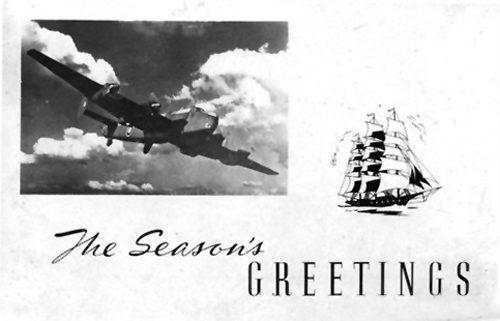 By 1944 the porpoising phenomenon had more or less been eradicated in the new Sunderland Mk1V, so much improved over previous Sunderlands that it was given a new name — the Short Seaford.

Everyone at MAEE, all ranks and professions, would have been in a more optimistic mood that Christmas than in previous years since 1939.

The U-Boats were being defeated, and in June of 1944 the Allies had landed on the beaches of Normandy. It looked, at long last, that Germany would be defeated.

Already MAEE had turned its attention to the Far East. A lend lease Consolidated Coronado flying boat was tested in the summer of 1944 for operations worldwide.

A lend lease Martin Mariner was fitted with kitchen equipment, a fridge and bunks for long flights.

Spitfires were fitted with floats for island hopping in the Pacific. And, on the MAEE drawing board, there were plans for the world’s first jet seaplane fighter. This had just been ordered for action in the Pacific.

Initial research and trials were carried out at Helensburgh up to flying model stage.

However, with World War Two ending the following year after the dropping of nuclear bombs on Hiroshima and Nagasaki, the Saunders Roe A1 was put in mothballs. It would not fly until July 1947.

However in 1944 the pressure was on to get this jet operational in the skies of the Rising Sun.

There were many less hospitable places to celebrate Christmas 1944 than in the plush surroundings of Ardenvohr.

Non-Scots serving at RAF Helensburgh also entered into the spirit of Hogmanay during the war years.

Parties were held in the officers mess at Ardenvohr, the sergeants mess at Ardenconnel, the WAAFs accommodation at Shorelands, and in other requisitioned houses.

It was a winter warmer for the ‘Sassenachs’ who found the Scottish climate particularly chilling at that time of the year.

Two years earlier, Londoner Bob Bird (right), the MAEE photographer, woke up on New Year’s Day, Tuesday January 1 1942, with a hangover, according to his diary.

So he went walking on snow-covered hills around Helensburgh taking photographs to send to his bride-to-be, Thea, in Liverpool. They would spend their honeymoon at Rhu and Loch Lomond the following winter.

But, by Sunday January 4, 1942, rain was turning that snow to slush. This allowed flying to resume for a few days, then on Saturday January 10 it was freezing hard.

“This can really be a terrible place to live in the winter,” wrote Bob in his diary. Bad weather, flying boats and seaplanes did not get on well with one another.

In his January diary entries Bob notes that one of the bodies from the Sunderland crash had been recovered. He refers to the MAEE Sunderland that somersaulted on landing at Rhu the previous November.

In a freezing moonlit night the test pilot in Sunderland W3976 mistook its reflections on the dark water as landing lights.

Even in the spring, frost was a problem, and it was blamed for the death of boffin H.White when the Scion Senior experimental seaplane crashed.

“Flying in Catalina 20,000ft. God it was cold with the bomb hatch open. I get frostbite in my fingers. Cold causes the pilot to have eye trouble. We crash land at 1500 hours,” he wrote.

Despite this, as he recovers in hospital, Bob writes with a shaky hand: “I would still rather be posted here than in some other places during this war.”

He refers to ‘The fall of Singapore” recorded on February 15.

Most people at RAF Helensburgh shared his opinion that it was a good posting.

It was the cultural differences between Southerners and residents of the West Coast of Scotland that took some getting used to on both sides.

In September 1945 most of the MAEE people had packed their bags and returned home — taking with them mostly happy memories of Helensburgh and Rhu.