THE Golden Hind on the Gareloch must have been an impressive sight — not Sir Francis Drake’s Golden Hind of 1580, or a replica, but a flying boat of the same name.

The three G Class boats were named Golden Hind (pictured above at Rhu), Golden Fleece and Golden Horn, and the first, Golden Hind, was launched on June 17 1939.

At the outbreak of war all three were quickly named by the Air Ministry as long range maritime military aircraft under the designation of S 26M.

There was a shortage of new Sunderland flying boats at this time.

Blackburn at Dumbarton had not yet started to build Sunderlands and deliver them to Helensburgh for flight testing. So Empire boats, similar in design to Sunderlands, were allotted for military service with the RAF and sent to RAF Helensburgh initially.

Golden Hind was the first to be delivered to the Marine Aircraft Experimental Establishment at RAF Helensburgh for evaluation, and modifications took place, with most of the heavy work being carried out at Blackburn Aircraft in Dumbarton.

The Empire boats were built for transatlantic commercial use, and MAEE carried out successful air to sea refuelling trials with the flying boat Cabot — which also went to Helensburgh in 1940 for wartime modification. 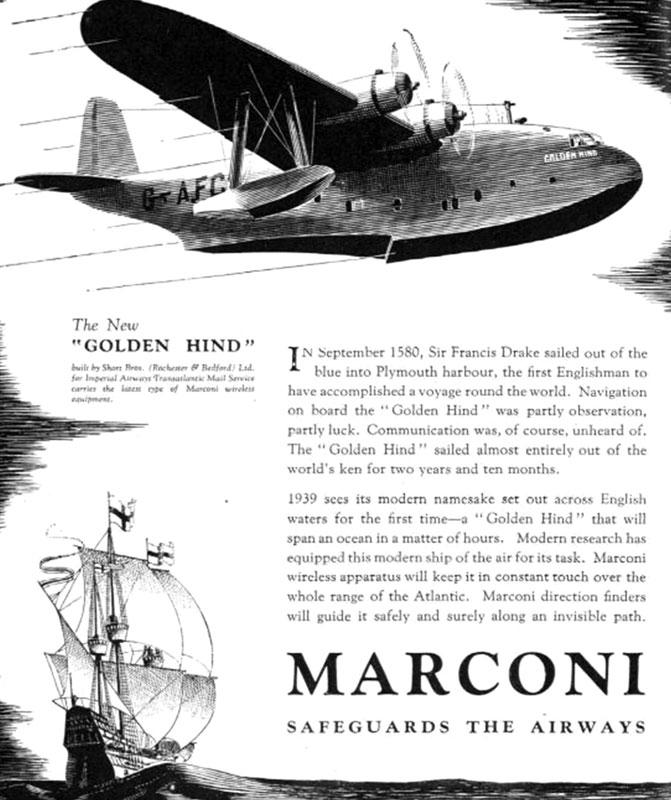 Golden Fleece and Golden Horn were delivered to Dumbarton in August 1940 and joined Golden Hind which was already at Helensburgh undergoing appraisal before the fitting of Air to Surface Vessel Radar.

This was fitted to all three flying boats. Work carried out at Dumbarton included armour plating, bomb carriers on the wings and facilities for flare chutes, smoke and flame floats.

Two Boulton Paul gun turrets were fitted dorsally, with a third turret in the tail which looked an afterthought until flared in.

For its Air Certificate Airworthiness trials at Helensburgh in May 1940 Golden Horn was photographed in camouflage with RAF roundels and two large Union Jacks on its sides.

For this official photograph the background at Rhu was deleted so as not to identify the location of the top-secret flying boat base.

Other trials conducted on the Empire boats by the MAEE involved fully loaded flights with 16 crew, full fuel and ballast loads.

Golden Fleece also had all four engines changed on the beach at Rhu, a major task for the MAEE aircraft fitters working on the wings.

At the time there was no slipway at Rhu and the men worked high up from the ground. A fall would have almost certainly resulted in injury.

Both 250 lb and 300 lb anti-submarine bombs were tested, together with ways to launch larger depth charges through the hatch of an Empire flying boat.

The gun turrets were found to be cold, draughty and noisy, so improvements were made at RAF Helensburgh. An F24 camera and Marconi radio were also installed.

MAEE’s three completed flying boats were then formed into a special ops G Flight at Helensburgh, before being issued to 119 Squadron at Bowmore, Loch Indall, Islay, while it awaited delivery of Catalinas.

Wartime duties for the G boats were varied, included flights carrying much needed supplies to Gibraltar and the Middle East.

Golden Hind soldiered on until the end of the war and was ‘demobbed’ in 1947. There it remained, near to its birthplace at the Rochester factory, where it ran aground, and it ended up in a sorry state (above) until scrapped in 1954.

The golden age of flying boats would soon be over. They had reached the height of their versatility during the Second World War.

Post war there were more airfields around the world, handing the advantage and popularity of air travel to land-based aircraft.

MAEE’s last flying boat involvement was the magnificent six-engined Saunders Roe Princess, which handled well despite its bulk. The efficient design both in and out of water benefitted from years of MAEE research.

However only one Princess flew before the project was cancelled. Flying boat research by the MAEE ceased in 1953 and the establishment closed completely in March of that year.

Flying boat research had started in 1918 with MAEE being named the Marine & Armament Establishment in 1920.

It moved to Felixstowe in 1924 as the Marine Aircraft Experimental Establishment, then was transferred to Rhu in September 1939 where it remained throughout the war before returning to Felixstowe after the end of hostilities for its final years.