THE B-20 was a revolutionary World War Two flying boat about to be put through its paces by RAF Helensburgh before it was granted the airworthy certificate to allow full production.

But tragically the Dumbarton-developed aircraft never arrived at the Gareloch base. 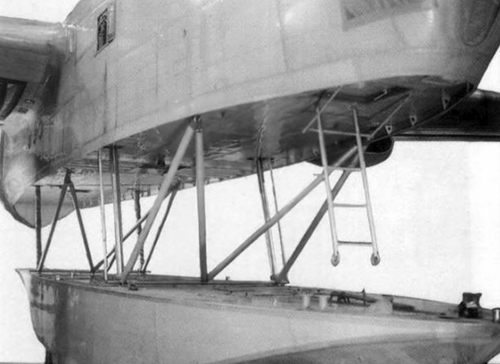 The Blackburn’s prototype (pictured above at Dumbarton) was unique in having a revolutionary retractable float pontoon, a design which alleviated the inherent aerodynamic deficiencies of seaplanes and flying boats by having a retractable bottom and wing tip floats.

On paper it had been allocated for testing at RAF Helensburgh, where the Marine Aircraft Experimental Establishment worked closely with Blackburn Aircraft at Dumbarton on such projects.

MAEE used Blackburn facilities at Dumbarton at the start of the war while a slipway and hangars were constructed at Rhu.

The Gareloch boffins worked closely with Blackburn on the Botha light bombers and Short Sunderlands, both built at the factory.

The crash reports stated it was in the hands of the MAEE at the time of the tragedy, but it was still in fact flown by Blackburn’s chief test pilot, Flight Lieutenant Harry Bailey, who had considerable experience flying test aircraft.

The B-20 first flew in March 1940 after months of research and development at Dumbarton. On the ill-fated day of the crash, a high-speed test reached speeds of 345 mph, extremely fast for a flying boat.

With a wingspan of 28 feet the B-20 was not as large as the Sunderlands at Helensburgh. On a previous test run there had been a problem with the trim. Then the aircraft suffered bird strikes and had to be repaired by the factory

These setbacks were regarded as niggles, and there were high hopes for successful trials for the B-20 — which was affectionately known as the ‘nutcracker’, the fate of anyone caught on the central float when it retracted.

On April 7 Flight Lieutenant Bailey had aboard with him Ivan Waller, a Rolls Royce flight engineer, Fred Weeks, a Blackburn test engineer, and Duncan Roberts and Sam McMillan, who were Blackburn aircraft fitters.

The pilot warned everyone aboard to be ready for a maximum speed test run on the two Rolls Royce 170 hp engines.

During this high-speed run, vibration set in throughout the B-20. Reducing speed did not stop it. Anticipating trouble, he ordered his crew to take to their parachutes.

Up in the cockpit Fred Weeks was able to escape through a hatch. He was later awarded a golden caterpillar for making a successful parachute escape.

When Ivan Waller deployed his parachute, it caught on the radio mast. He was trapped halfway out of the escape hatch.

How Ivan managed to climb along the top of the fuselage, untangle his parachute in the slipstream and drop free was remarkable. He lost fingernails hanging on to the fuselage.

Waller (left) was a super fit sportsman, who had previously cheated death. He had a strong grip and strong lungs through climbing mountains.

Before the war while on Scafell he fell from the notorious Flake Crack buttress and lived.  He also risked death or serious injury as a Grand Prix racing driver. He won the Irish Grand Prix in 1932 and was also a creditable 11th in the Le Mans 24 hours race.

His adventures continued post war as a climber, and he lived to the age of 90.

Bailey bravely stayed with the aircraft until the last possible moment before it crashed near Garroch Head, the most southerly point on Bute, to give all his crew members a chance to escape.

When he eventually jumped himself, his parachute did not have time to open fully, and he drowned. No trace of Duncan Roberts or Sam McMillan was found.

The site of the B20 crash is a war grave but in August 1998 Royal Navy divers discovered one of the Rolls Royce Vulture engines. The wreckage had become caught up in the nets of a trawler.

The engine was pulled to shallower waters and then recovered by using air bags to bring it to the surface. It is now in an aviation museum.

The B-20 crash shocked the workforce at Blackburn, many of whom knew the men aboard as friends.

Fortunately for the MAEE the B-20 had still been in the hands of the factory test pilot. The accident could have easily happened while the flying boat was being tested by MAEE personnel.

Alas they had their own tragedy waiting in the wings. The following year MAEE suffered the worst flying accident in its entire history from 1920 until 1966.

The Saunders Roe S.36 Lerwick test aircraft L7248 crashed into a hill above Faslane on October 21 1941 after taking off from Rhu, killing all seven people aboard.

The death certificates give the site of death as Shandon, and the cause of death ‘Due to War Operations (Flying Accident)’.

The 81-foot flying boat, powered by two 1,375 horse power Bristol Hercules engines, took off to undertake a calibration test, but during the flight the starboard engine failed and the aircraft was unable to maintain height on just one engine.

Eyewitnesses saw the starboard wing dip before the crash. The engines, which were recovered from the wreckage and sent to Bristol for examination, were found to be fully serviceable.

So it was assumed that flying control problems had been experienced. The Court of Inquiry into the accident then concluded that Lerwicks were unstable, particularly on landing approach.

It was further noted by the Air Investigating Board, together with the MAEE commanding officer, that the handling characteristics of the Lerwick had never been satisfactory when flying with one engine feathered.

It was agreed that there was little doubt that the failure of either engine would place the pilot in a very difficult situation.

Wilfred Harry Such was the only civilian aboard the aircraft. On his death certificate Harry, who was buried in Rugby where his wife lived, was classified as a civilian employee of the Ministry of Aircraft Production, attached to MAEE as an instrument repairer.

Only two of the crew, Leading Aircraftmen William D.J.McLaughlin from Glasgow and William S.E.Gianella from Bristol, had a full death certificate with regard to cause of death — “Multiple injuries sustained in flying accident. Instantaneous”.

The other five were “Registered on the information of G.R.Bruce, Wing Commander, acting for Officer Commanding Marine Aircraft Establishment, Royal Air Force, Helensburgh.”

Four of the crew are commemorated in row seven of Helensburgh Cemetery, Pilot Officer Mills in Radcliffe, Manchester, and A.C.2 Peter Beattie Hunter at Runnymede, Surrey.

It is likely that these bodies were not recovered or were unrecognisable.

Flight Lieutenant Alexander, the two Leading Aircraftmen, and A.C.1 Raymond T.M.Bullocke from Sanderstead, Surrey, may also just be remembered in spirit by their markers in the burgh cemetery, likewise Blackpool man Pilot Officer Mills at Radcliffe.

Robin Bird, who is an expert on MAEE and wrote two books about it, says that, from the first flight in 1938, the Lerwick rapidly gained a reputation for being a ‘flying pig’.

It was intended to serve alongside the Short Sunderland in RAF Coastal Command. Before the prototype was tested, the Air Ministry placed an order for 21 Lerwicks in 1937 as war clouds gathered.

Robin says: “MAEE at Felixstowe was given the task of sorting out the many problems involving Lerwicks. By January 1939 the faults with the first prototype L7248 were confirmed with the flight of the second prototype L7249.

“When war was declared, MAEE moved to Helensburgh and Rhu to continue Lerwick trials, but some Lerwicks were allocated to Coastal Command to help counter the U-Boat menace. The Lerwick was better than nothing.”

The aircraft was potentially lethal for unsuspecting operational pilots. In the early 1960s Air Vice Marshal Sir Albert Case, who flew one, remembered the Lerwick as ‘that bloody plane’.

Of the 21 built, nine crashed, killing 22 crew members, and a further five sank at moorings because of float collapses. So the Lerwicks were withdrawn from squadron operational use and declared obsolete in 1942.

Robin added: “There is no record of any Lerwicks making contact with the enemy. They were their own worst enemy. MAEE Helensburgh had done its best to fix a flawed design — and paid the price.”

MAEE had hoped that successful trials of the B-20 would have enabled it to replace the troublesome Lerwick.