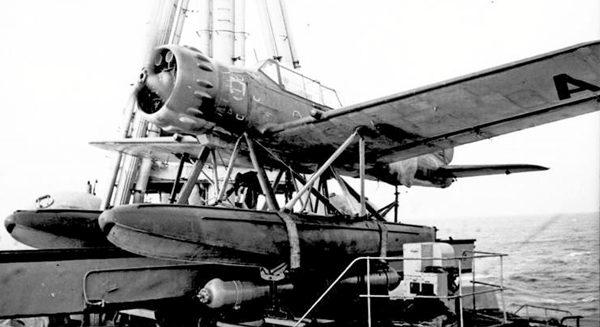 AN eagerly waited seaplane landed on the Gareloch in 1940 . . . then tipped over and sank.

It was a captured World War Two Arado 196a floatplane, which was being brought to the Marine Aircraft Experimental Establishment at Helensburgh and Rhu.

MAEE was set up in Felixstowe by the Air Ministry in 1924 to evaluate water-based aircraft. It moved to Rhu in 1939, to ensure its work did not attract the attention of German spy planes or bombers.

This story is well known to Robin Bird, who wrote ‘Top Secret War Bird of World War Two’ about his father, photographer Bob Bird, and is currently close to completing a second book about MAEE.

Robin, a retired local newspaper editor who lives on Merseyside, knew that the aircraft was captured in Norway, but only recently discovered the circumstances after meeting a fellow author in a supermarket.

He said: “Tom Lightburn wrote a wartime book based on the true story of how the diminutive destroyer HMS Glowworm attacked the German heavy cruiser Admiral Hipper — and the Arado had been been on board the German ship.”

It happened during the battle for Norway on April 8, 1940, when Glowworm’s 35 year-old captain, Gerard Roope, against all odds, rammed the Admiral Hipper. His ship broke in half and sunk — but put the enemy warship out of action. 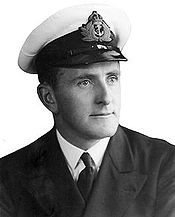 Lieutenant Commander Roope was awarded a posthumous VC on the recommendation of the captain of the Hipper for his part in this David and Goliath encounter. He is one of very few VC recipients to have the award justified, in part, by a recommendation and supporting evidence provided by the enemy.

The Arado, launched before the ramming and unable to return to its mother ship, later captured by Norwegian aircrew when it landed for fuel in Norwegian waters. The crew, Ltn Polzin and Obit Techam, were arrested.

“The modern mono wing floatplane was then used for a short while against the invading Germans,” Robin said. “However, with the situation rapidly deteriorating in Norway, a top level decision was made to evacuate the Arado to Britain as a war prize.”

From the start, this did not go smoothly.

On April 17 four aircraft were hastily made ready to fly in convoy to Britain. The Arado was accompanied by two Walrus seaplanes and a trailing Norwegian M.F.11 biplane.

The Walrus pilots were British wanting to return to their own units before the fall of Norway. The Norwegian pilots planned to return home in new aircraft to fight to the end.

They took off at 3.30 a.m. on April 18. As they approached Orkney, Gloster Gladiator pilots from Scapa Flow mistook the situation, thinking the M.F.11 and Arado were about to attack the Walrus seaplanes.

The M.F.11 was shot down before the mistake was realised, but fortunately, the Norwegian pilot, Lieutenant Diesen, was able to land despite the aircraft being riddled by up to 50 machine gun rounds. He and his crew were unhurt, and were rescued.

The Arado landed safely, and was given a Fleet Air Arm Commander, believed to be Wing Commander C.W.Byas RN. He flew the BMW-engined floatplane to Helensburgh, where MAEE personnel eagerly waited.

When it sank in the Gareloch the pilot was rescued, the wrecked plane was raised to the surface, and a lot of useful information was gathered.

A Helensburgh resident, Isobel Reid, worked at MAEE for 17 months early in the war and had a good knowledge of German. She told Robin that she remembered being asked to cipher German wordings in the airframe and on the aircraft’s instruments.

“Isobel told me that it was highly technical and difficult to make out!” he said.

MAEE boffins were able to make comparisons of the Arado design with the Blackburn Roc floatplane prototype first tested by MAEE in December 1939.

Birger Larsen, curator of the National Norwegian Aviation Museum, has confirmed that this was the plane captured by Norwegian Forces close to Kristiansand when it landed for fuel. Its number was 0044.

Robin added: “I am still working on having my second book published, but the delay has allowed further research, so the time has not been wasted. I am also looking at the possibility of publishing on disc, and BBC One TV has been in contact about a possible broadcast.”