A REMARKABLE interview given by a Helensburgh man who was awarded the United States Medal of Honor in 1894 for bravery in the American Civil War has come to light.

Sergeant James Jardine, who had emigrated from the burgh, received the award for “gallantry in the charge of the volunteer storming party".

At the time he was in Company F of the 54th Ohio Infantry, which he had joined as a Private at Hamilton County in Ohio.

His act of gallantry took place at the Siege of Vicksburg, Mississipi, on May 22 1863, the final major action in the Vicksburg campaign of the Civil War.

In a series of maneuvres, Union Major General Ulysses S.Grant and his Army of the Tennessee crossed the Mississippi River and drove the Confederate army of Lieutenant General John C.Pemberton into defensive lines surrounding the fortress city of Vicksburg.

An assault on May 19 against the Confederate fortifications was repulsed with heavy casualties, so on the morning of May 22, General Grant launched what he hoped would be a crushing assault, but the Union infantry was repulsed and thrown back along a three-mile front.

James gave the interview to his local newspaper, The Inter Ocean, from Chicago, Illinois, and it was published on May 29 1895. It was found last year by Jeff Giambrone of Vicksburg, who wants James to be recognised in his home town.

The article is headed James Jardine Tells of His Experiences in the War, MEDALS FOR BRAVE DEEDS, One of the Leaders in the Assault on Vicksburg, Thrilling Story of the Memorable Attack Made at Graveyard Road. 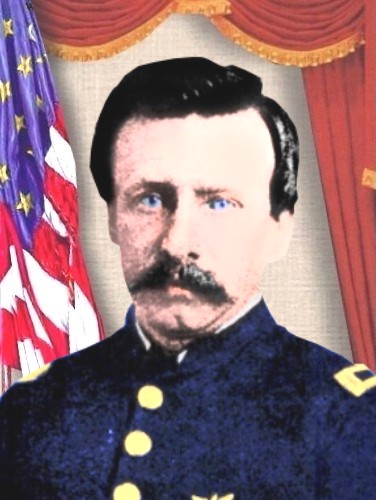 An old and feeble man, wearing a faded suit of blue, sat alone in the dingy office of one of the cheap hotels on West Madison Street yesterday afternoon. There was nothing remarkable in his appearance except that on his coat were pinned two large bronze medals and a G.A.R. badge.

"Yes, one of these medals was awarded to me by Congress and the other by the State of Ohio," proudly said the old man in answer to a question, turning the medals over so the inscriptions could be read.

On one of them was engraved: “From Congress to FIRST LIEUTENANT JAMES JARDINE, Co. F. 54th Ohio Vols., For Conspicuous Gallantry In Action at Vicksburg, Miss., May 22, 1863.”

The other medal bore on one side the seal of the State of Ohio, and on the other an inscription stating that it was presented to Lieutenant Jardine "in recognition of his service to his country."

"Will you tell us about the action in which you won your first medal?” the old soldier was asked.

"It was at Vicksburg, May 22 1862," he began. "Volunteers were called for, two from each company, to lead the column to storm the rebel works. On account of losses of men and officers, Companies F and K of the Fifty-Fourth Ohio Volunteers had been consolidated.

“As no one volunteered for the duty, as sergeant I was instructed to order out the first two men on the roll for picket duty. Looking at my book, I found that the first two names were of an old man and his only son, named Goldsberry, of Company K.

“I wouldn’t detail them to what I felt was certain death, and throwing down the book, I said, 'Captain, you may detail one of those two men if you will: I'll go for one, but I can't detail them for it.’

They Make The Assault

"When I said this, six boys of our company stepped out, and said they would go with me, but only one was wanted. Edward McGinn was chosen.

“Two men from each company of the division made a total of 150 men to lead the attack. The assault was made at Graveyard road, a narrow pass where only four men could march abreast.

“When the signal was given, we rushed forward, and those in front were within 100 feet of the fort before the rebels opened fire on us. Our orders were not to fire until within the fort, and to use our bayonets only in the attack.

“Twenty-four of us had crossed the ditch and were on the wall of the fort where the rebel fire was so hot that it drove back the rest. We couldn’t retreat, so we lay down on the sloping parapet of the fort, and there we stayed from 10 o'clock in the morning until dark.

“The parapet was sloping, of course, and with our bayonets and hands we scooped out the earth beneath us, and partly sheltered ourselves.

“The rebels in the fort were within four feet of us, but didn't dare to raise their heads over the edge of the wall to shoot us. When they pushed their guns over the edge, we shoved them aside with our bayonets.

“Among our number was a brave young fellow named Trogden, of the Eighth Missouri Regiment, who planted our colors beside him, and there they waved all day, with the rebel flags just above them in the fort.

“Just before dark it occurred to the rebels to roll shells down the wall. They killed, by these, two men of the Fifty-Fifth Illinois, a Chicago regiment, and wounded many more."

"Were you wounded at this time?”

"I got a bayonet prick in the knee which I have felt to this day. That was the only thing worth speaking of, though they drew blood on me in five different places and there were nine bullets that passed through my clothes without striking my body.

“If the others had only followed us we could have taken Vicksburg that day, but the rebel fire was too hot for any man."

"In what other engagements were you wounded?"

"In my first battle, at Shiloh April 6, 1862, I was shot in the left leg. At Jonesboro, Sept 1, 1864, I was wounded in the left forearm and pretty badly, though the surgeon managed to save the arm for me."

"How long were you in the war?"

He Draws a Pittance

"How many battles were you actively engaged in?”

"Well, I couldn't tell that without counting them up. Let's see; there was Shiloh, we had two hot days of that; Chickasaw Bayou, there the battle lasted three days; Arkansas Post, where we were under fire three, but the real fighting was only on one day, I think January 11, 1863.

“Then came Champion Hills, and two battles at Vicksburg, May I9 and 22. After them were Jackson, Mission Ridge, Buzzard's Roost, Dallas, Resaca, Dalton, Rome, Kenesaw Mountain. Nickajack Atlanta, Erle Church, Jonesboro, Fort McAllister, and Bentonville. That's all I think could be called battles.

“I couldn't give any idea of the number of skirmishes in which I heard the hum of bullets. I was also at the sieges of Corinth, Jackson, Vicksburg, and Savannah."

"In all these battles you were only wounded severely three times?"

"Of course, you draw a pension?”

"Are you not entitled to more?”

"The men who did the work don't seem able to get the pensions; but the fellows who hung back in the rear and have good hospital records get all they ask for, it does seem to me.”

"Why didn't you make application for pension long ago?"

"We boys missed it long ago by not doing so; but, you see, when the war was ended we felt that the government had its hands full without paying pensions to the men who had only done their duty and guarded their own rights.

“We were all young and hearty then and felt able to battle with the world.

“I went West and have been there ever since, mining for silver, but that doesn't pay any longer, and I can't work as I used to. Now I would like to have a pension and know I could get $24 a month, which would support my old wife; and me; but now the trouble is for me to find some of my old comrades by whom I can prove when and where I received the injuries that entitle me to a pension.

“If there are any members of Companies F or K, of the Fifty-Fifth Ohio Volunteers I wish they would give their names and addresses."

Mr Jardine is a brother of Robert Jardine, who lives at No. 446 Warren Avenue, Chicago, and any letters addressed to that place will reach him.

■ At Vicksburg the Union Army suffered more than 3,000 casualties, and 97 Union soldiers earned Medals of Honor — the second largest one-day total in history.

James was one of 80 soldiers cited for gallantry in the charge of the volunteer storming party, which actually denotes the fact that he was at the head of his attacking force where the enemy fire was hottest and the danger the greatest.

Grant then besieged the city from May 25 to July 4 when it surrendered, yielding command of the Mississippi River to the Union. The war ended two years later.

James was the eldest child of Helensburgh couple Graham Jardine, born in 1795, and Mary, nee Brodie. More details of the family and its Helensburgh background can found here.

The pictures at the top and bottom of this article are of the Stockade Redan, where James Jardine won his Medal of Honor, in 2010 and 1930 respectively. They too were supplied by Jeff Giambrone of Vicksburg. The other pictures are by courtesy of www.HomeOfHeroes.com