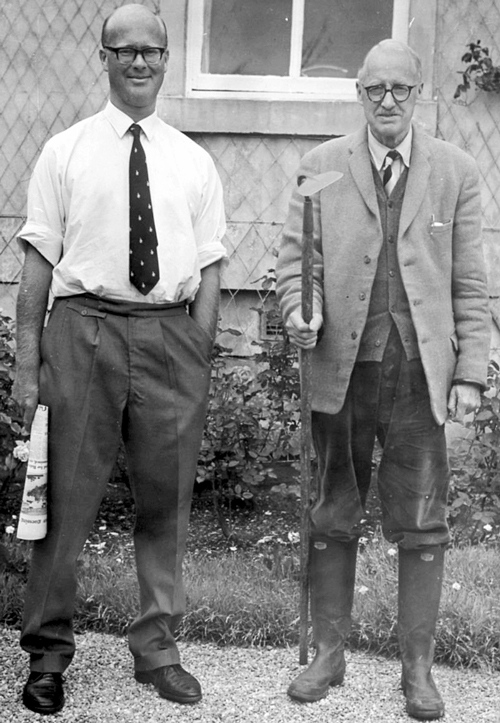 HELENSBURGH’S Abbeyfield supported housing for the elderly at 54 West King Street, Barclay Smith House, consists of eleven flats, and is named after its most generous local benefactor.

In the late 1960s Colonel Edward Alan Barclay-Smith, MA (Cantab), AMIMechE, AMIEE, a prominent figure in the then Helensburgh Town Council, sat down in his Suffolk Street villa, Khillanmorg, and wrote a cheque for £6,000 — the equivalent of some £80,000 today — to the Abbeyfield Society.

It was to help renovate homes for old people in the burgh. He considered the cause to be worthy, and said: “I thought there was a crying need for it.”

It was the other side of a military man whom many local people found it difficult to interact with, something of which he was well aware.

He deceived many observers into believing he had led a quiet life. He had lived anything but that.

Thrice wed with three children, born the son of a university lecturer in Cambridge where his father became Professor of Anatomy, Edward Barclay-Smith spent much of his life as a soldier.

“All my education was in scholarships,” he said. “My father had no real money. My family always saved.”

He did too, and ended up a wealthy man, owning extensive property in Helensburgh and Rhu. That cheque for Abbeyfield came from his savings.

His first wife Elspeth was the daughter of W.P.Ure, of Balvaird, Helensburgh, a flour miller who was a Bailie and chairman of the Glasgow Savings Bank.

They were married in Helensburgh Congregational (now United Reformed) Church on December 7 1925 when he was a 28 year-old London-based Captain in the Royal Engineers.

The grandfather of the first Mrs Barclay-Smith, Sir John Ure, was Lord Provost of Glasgow and built the seafront mansion Cairndhu.

Their marriage lasted 25 years until the Colonel’s wife died in 1950. The following year he married Manya Jalakas, an Estonian. A year later tragedy struck again and his second wife died. “Both died suddenly and of heart attacks,” said the Colonel.

In August 1953 he married his third wife, Helen Forbes Martin, from Airdrie.

As a young man, Colonel Barclay-Smith joined the Army during the First World War. He was commissioned in 1916 in the Royal Engineers, but the following year he was wounded.

He was going up the line at night on horseback when a shell exploded. The Colonel was hit in the leg, and the horse had facial wounds.

He was shipped back to Britain for six months. Then he narrowly missed being taken prisoner when the train on which he was returning almost steamed into the clutches of the advancing Kaiser’s men.

After the war he was sent by the Army to Cambridge. In 1926 he was posted to Gibralter as adviser on electrical and mechanical matters.

In the thirties the Colonel saw India for the first time. It was there, in terrible heat, that he served for five years until the outbreak of the Second World War.

He was posted to France, and in the big German push in the early years he fought his way back to Dunkirk where he managed to board a ship bound for home.

Even at home the bombs followed him, and many comrades in his unit mustering in Manchester were killed in air raids.

In 1943 Colonel Barclay-Smith left the Army — invalided out from his wartime posting to India as Lieutenant Colonel. In 1947 he was placed on the retired list.

But he was never Provost, an office he did not seek but would not have refused.

Many thought him an irascible man, and he might not have argued with that. For the veteran of two world wars and many town council battles was a fairly shrewd judge of his own character.

He challenged the County Clerk, the Town Clerk, the Police, the Government, the Gas Board, the Scottish Office and a few others on procedure, and if he did not always win, he certainly made some of them think.

His staccato speech and his military air were a cloak covering a positive and highly intelligent disposition.

“People seem to misunderstand my tone of voice,” he would say. “They think that I am superior and commanding when I am not. This can bring difficulties.”

But trouble passed over the Colonel’s head like cannon fire. He heard it, but he rarely ducked.

One time he walked out of the Town Council chamber in the middle of a meeting. He was not defeated. He just wanted the others to think about his point. It was over the fixing of the Burgh rates.

Some council colleagues did not like the bespectacled Colonel, and he did not like some of his colleagues. He said: “I’ve come to the conclusion that they never listen to you — they have made up their minds beforehand.”

On that the Colonel might well have been right, as a share of the town’s business was discussed and often settled outside behind closed doors.

As roads convener, the Colonel knew exactly what this responsibility entailed, and he found it hard to suffer those who did not.

He said: “They keep on at me about potholes and pavements. That is the job of the Burgh Surveyor. Mine is to administer at council level.”