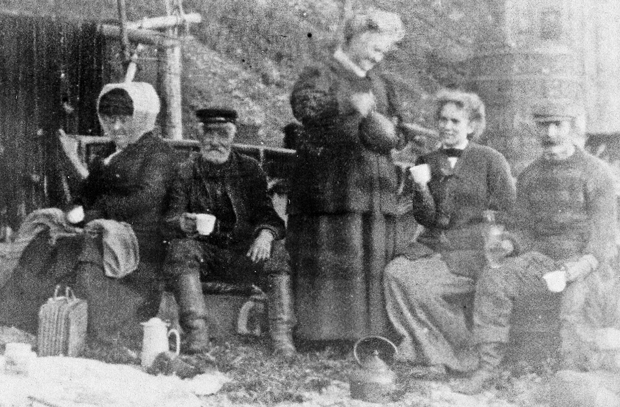 OVER the years one name has become synonymous with the Loch Longside village of Portincaple . . . Finlay McNab.

The name came up again when Helensburgh Heritage Trust chairman Stewart Noble was given a copy of a one-page letter from the LochGoil & Inveraray Steam Boat Company on their headed notepaper awarding a sub-contract to him.

So who was Finlay McNab? One person who has researched him is Heritage Trust director and local historian Alistair McIntyre.

Alistair said that the story started around 1858 when the then head of the family, widower Duncan McNab, settled in the village with his sons Finlay and Duncan and daughter Helen.

Duncan was born around 1805 in the Inveraray area into a family of fishermen at a time when herring fishing was a major part of the local economy.

Alistair said: “There had been McNabs in the upper Loch Fyne area at least as far back as the 17th century, and they were often identified with fishing — one of the very last locally-owned herring fishing vessels, built in 1922, was named Clan McNab.

“The story goes that when a family member was passing Inveraray Castle one evening, he noticed smoke rising from the building.

“Thanks to his prompt action in raising the alarm, the blaze was put out before too much damage was done.

“The Duke of Argyll’s family, needless to say, were most grateful, and as a reward, the McNab family were given the use of a substantial cottage at Garron Bridge, Loch Shira.” 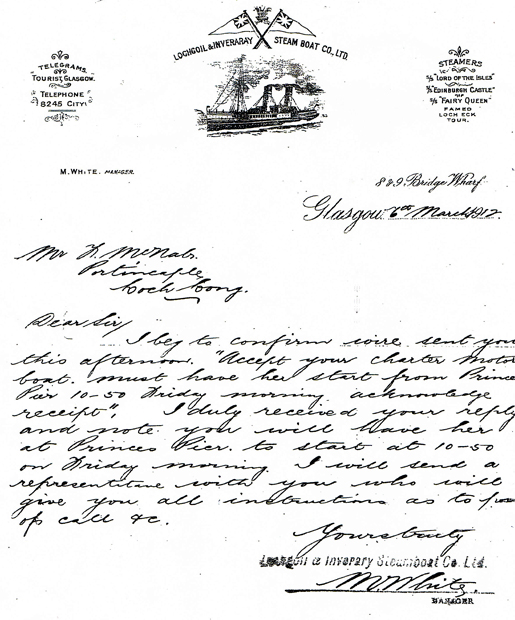 The herring shoals, however, moved around, and during one lean period for fishing in the 1830s Duncan changed his career to join the textile dyeing industry in the Vale of Leven. His first son Finlay was born at Alexandria in 1839.

Not long after the birth the family moved to Lochgoilhead and resumed fishing, and some 20 years later he decided to join other fishermen at Portincaple.

The 1861 Census names Duncan (56), by now a widower, as head of a household. He and his sons Finlay (22) and Duncan (19) are described as herring fishermen, with daughter Helen (17) completing the family.

Around 1881 Duncan Snr now formed part of a household headed by son Finlay, who had married Mary and had two infant daughters, Mary and Helen.

The family home was Portincaple House, or Ferry House, said to have been built just before the Jacobite uprising of 1745, and Finlay was now ferryman rather than fisherman.

The ferry ran from Portincaple to Mark, on the opposite side of Loch Long.

There were regular steamers on the loch and there was no pier at Portincaple, so people and goods also needed the ferry to reach the steamers.

In addition, a ferry run from Portincaple to Lochgoilhead removed the need for a tortuous land journey. So one way or another, there was the basis of earning a living — augmented by fishing.

In the 1880’s, Finlay and his family began to play host in the summer months to famous Victorian political rebel, Charles Bradlaugh, the MP for Northampton.

In 1884, on the advice of his friends, Bradlaugh had been induced to take a break away from the hurly-burly of politics, and was pointed in the direction of Portincaple.

He took lodgings at Ferry House, and he and his daughters became captivated by their hosts and by the beautiful surroundings.

He would go out in a boat and fish in the loch, while his two daughters studied botany in the surrounding area. Each summer until his death in 1891 he returned to Portincaple for his much-anticipated holiday.

Important changes followed the opening of the West Highland Railway in 1894 and the building soon after of a station at Whistlefield.

As well as bringing more visitors the railway enabled taking fish catches to market much more quickly than was possible before.

Now each morning during the fishing season, boxes of freshly caught fish were taken up the steep hill from Portincaple to the station to go to Glasgow Fish Market.

In 1906 the Ardgoil Estate on the other side of the loch was gifted to Glasgow Corporation as an amenity for the people of the city — and increasing numbers wishing to visit ‘Glasgow’s Highland Estate’ brought new customers for the ferry.

Ferry traffic and boat hire were also boosted by the presence at Mark Cottage of a celebrity, retired shepherd James Grieve, who was not only Glasgow’s oldest resident, but also Scotland’s oldest man.

Grieve, who was reputedly born on January 1 1800, was happy to have his photograph taken with visitors, who paid him for the privilege, and many such pictures survive to this day. 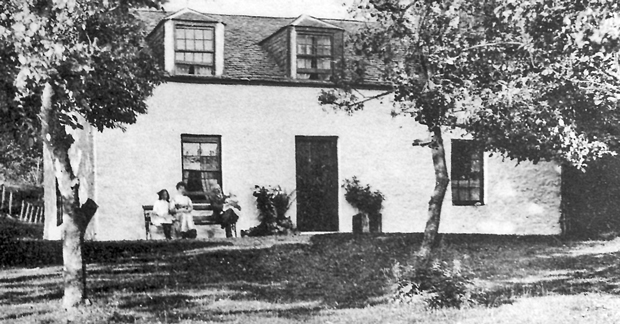 He was interviewed by reporters from the Glasgow Herald shortly before his death towards the end of 1910, although by that time he had moved with his son’s family to Corrantee at Loch Eck.

In 1912, Finlay was awarded a contract to carry mail between  Greenock and Lochgoilhead as he possessed a vessel with an engine, which few small operators had.

Sadly, though, the contract was terminated within a year when the awarding company went bankrupt.

By this time, Finlay was elderly, and when he died in 1914, he was described as one of the best-known fishermen in the area. It was the end of an era.

At a time when society was very much male-dominated, several female members of the family made their mark.

Finlay’s widow, Mary, was prominent in organising collections for the Soldiers and Sailors Fund during the First World War, while at the time of her death in 1926, a contemporary noted “when illness struck, it was always considered wise to get the opinion of Mrs McNab”.

Finlay and Mary’s third daughter, Robina, usually referred to as ‘Beenie’, was the best-known female member of the family.

She spent her 74 years at Ferry House, and for generations it was the hub of the community. At New Year local people would gather there as a matter of course.

For many years, the house was also the venue of another local institution, the annual open-air Communion Service, held at the time of the Glasgow Fair.

If the weather was poor, the service would take place inside the house.

It was the end of another era when Beenie died in 1959, but many members of the family continue to live in the area to this day.