A SHIPOWNER who lived in an upper Helensburgh mansion doubled it in size — and it later became two separate houses.

Glenys Hierzer, who lives in Campbeltown, New South Wales, Australia, great grand-daughter of James Aitken and his wife Emily, who lived at Burton Hill, has been researching her family tree and is looking for more information.

“I would be very interested to know whether the house still stands or anything about either it or the family,” she said.

It is still standing, and is entered from East Abercromby Street. Behind it and attached to it, closer to the road, is the addition, Berriedale.

Burton Hill was listed in 19th century local directories as being at 98 Sinclair Street, but a map from that period showed that this was the original entrance, with the drive going past the bottom of Helensburgh Bowling Club.

At that time the house was called Brownhill, which was built in 1861 by a Mr Brown, a year before the High Green opened in 1862.

Seven years later, on March 31 1869, James Aitken, a widower with a daughter Edith Louise from his first marriage, married Emily Hill, the daughter of merchant Giles Hill, in Devizes, Wiltshire, and some time after that they bought Brownhill.

At a later stage some of the grounds were sold off, and the entrance moved to 4 West Abercromby Street. The rear of the house eventually became Berriedale, which has its own entrance further to the west at no.2.

The name change was presumably inspired by Mrs Aitken, who was born in Trieste, Austria, in 1846 and was the grand-daughter of Francis Hill, owner of Burton Hill House in Wiltshire.

James was born around 1826 in Dundee, son of Alexander Aitken of Glasgow, and attended the Trades School in Glasgow. He had a sister, Mrs Margaret Loney, of San Francisco, California, USA.

He began his business career with Kidston and Co., shipowners of Glasgow, and later became a partner in Aitken & Birrell, ship and insurance brokers. Then he went to Turkey where he was a merchant.

On his return to Scotland, he and James Lillburn founded the Loch Line of Glasgow in 1867, and James Aitken made daily visits to intending shippers, a duty he performed long after other owners had given up.

The Loch Line clippers were considered by seamen as examples of what well run and comfortable ships could and should be, and they carried first, second and third class passengers.

The usual route was to load general cargo and passengers at Glasgow and then sail to Adelaide. The ships then sailed to Melbourne or Sydney where they loaded wool or grain, generally for London.

Business began with the chartering of the Clan Ranald, eventually bought and renamed Loch Rannoch, the Ben Nevis and the Loch Awe.

In 1873 a second company, the General Shipping Co., was formed with a different group of investors, but also managed by Aitken and Lilburn, and before long the two companies merged.

Despite the excellent maintenance of the fleet and the skill of the masters and crews, the Loch Line had a reputation for misfortune, with 14 of its 25 ships either wrecked or lost without trace in a 30 year period.

Although James did not enjoy good health, he and Emily had six children, the first five born at Burton Hill.

Glenys said: “While still young, he was locked away in an institution in England and never spoken of again — even my mother never knew what he had done. One member of the family does know, but refuses to say, frustratingly. Whatever it was, it was a big scandal to the family.”

A sixth child, Violet Alice Aitken, was born on December 14 1886 in Mentone on the Italian Riviera, where the couple had a holiday home — and it is said that the railway company put on a special train for them and their servants whenever they went there. Violet was Glenys's grandmother.

James died in Mentone in the spring of 1900, and it is thought that Emily remained there after his death.

There might have been an obituary in the Helensburgh and Gareloch Times — but that is the one year for which Helensburgh Library does not have copies.

However in a report of a Clyde Navigation Trust meeting in the Glasgow Herald of May 2 1900, tribute was paid to him as a Trustee from 1881-7 by Lord Provost Sir Samuel Chisholm.

He said that former colleagues of Mr Aitken looked back on their friendship with him with very pleasant memories, and added: “He was a most courteous and obliging colleague and all who had intercourse with him reported the happiest recollections of him.”

Another colleague said of him: “Most gentlemanly and courteous in manners, he was very highly esteemed amongst us, and our remembrance of him is of the pleasantest kind.” 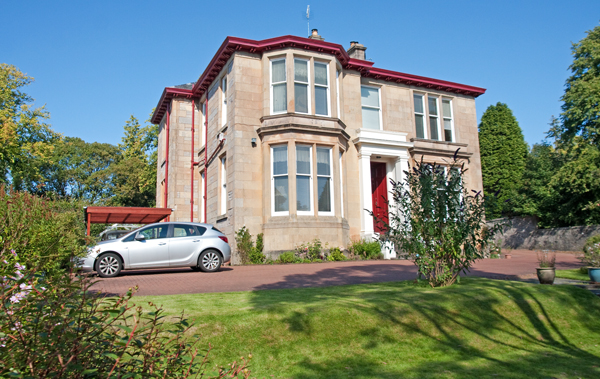 By 1921 the name of the house had become one word, Burtonhill. It was owned by George A.MacLellan from 1922 to 1952, during which time, three children were born to add to the four who moved to Helensburgh with their parents from the west end of Glasgow.

Mr MacLellan's first wife died and he remarried. The children grew up and left home, evacuees were billeted in the house during the Second World War, and one of his sons was killed in 1941 in North Africa — his name appears on the War Memorial in Hermitage Park.

Mr MacLellan's grandson, Graham M.Philips, who moved to the town in 2003 and lives nearby at Haywood, 6 Queen Street, says that it was his grandfather who arranged for Burtonhill to be divided into three parts in about 1948.

He and his wife continued to live in the main house and sold the second part, which he named Berriedale and which had its own entrance on Queen Street, to dentist Ronnie Marshall and his wife Fay who lived there for several years, and the smaller third flat to an unknown buyer. The architect was named Laird.

Graham said: "The address in my grandfather's day was 110 Sinclair Street, and the drive, which was just below the bowling green, was shared with Rockmount.

"I am not sure why my grandfather decided to move to Helensburgh, although there were members of the family already here and ancestors came from Glen Fruin and Loch Lomondside.

"My grandfather followed his father into the business founded by his uncle, George MacLellan & Co., the Glasgow Rubber Works.  He travelled daily by train and tramcar from Helensburgh to 'the Works' in Maryhill. At that time the train was a far quicker means of transport than a car.

"The MacLellan family connection with Burtonhill ended in 1952. The main flat was finally sold in September of that year, but, a few days beforehand, one of my aunts held her wedding reception in a marquee in the garden."

A more recent resident of Burtonhill had a very different claim to fame. Singer Marti Pellow lived there for several years at the height of his popularity with the group Wet Wet Wet.