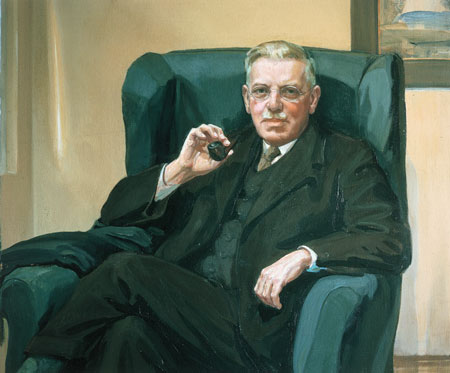 HELENSBURGH is full of attractive mansions designed by leading Scottish architects — but the one which attracts thousands of visitors from all over the world is Charles Rennie Mackintosh’s iconic The Hill House.

Today the large grey building at the top of Upper Colquhoun Street — described as “universally regarded as Mackintosh’s finest domestic creation” — is the property of and run by the National Trust for Scotland and is open to the public daily from April 1 to October 31.

But the mansion would not have been built without the vision, and the cash, of publisher Walter Blackie and his wife Anna, who engaged the talented young Glasgow architect to build their dream family home.

Their granddaughter Ruth Currie, who lives in Glasgow and is the family historian, supplied some information about the couple.

Walter Wilfred Blackie was born at 10 Kew Terrace, Glasgow, on July 31 1860, the son of Walter Graham Blackie and his wife Marion Brodie. He was the ninth child of ten and the third son and last son.

His father was involved with his father and brothers in the book publishing company of Blackie and Sons. As the business prospered the family moved west from the city to the expanding suburb of Kelvinside.

When he was seven the family moved to the brand new Belhaven Terrace.

Walter later described a childhood playing in woods and fields which was all going to be swallowed up in the city. Family holidays were spent mainly down the Clyde, including Clynder and Cove.

He went to school at Glasgow Academy and then, aged 14, with some other boys from Glasgow to the gymnasium in Elberfeld in Germany.

His father had gone to Germany as a young man to learn the book trade and hugely admired the country. Both brothers went to school there previously, and his brother William actually died there.

After school Walter returned home to attend Glasgow University where he gained a B.Sc. Next he had a brief spell in the family business before leaving for Ontario, Canada, and work as a lumberjack.

However any ideas he might have had of making his life in Canada ended with pressure from his father to come home to join the family business.

So after a brief spell with a publishing company in New York he returned home and joined his father, uncle, brother and cousin in Blackie and Sons.

The firm was prospering in part on the back of compulsory education and it was in educational books as well as general publishing that Walter was chiefly involved.

In 1889 he married Anna Christina Younger, also from Glasgow, and they set home at Thornville Terrace, Hillhead — which was later knocked down to make way for Hillhead High School.

Four of their five children were born there before the family moved to Dunblane.

Ruth said: “He very much wanted to build his own house and decided Helensburgh should be the place.

“This was because he felt the education in the town was appropriate for his children, and where he could enjoy the countryside and sailing.

“Talwin Morris, the art designer at Blackies, introduced him to Charles Rennie Mackintosh, and Walter was impressed. The result was The Hill House.“

He continued to work in the business, becoming chairman in 1918 on the death of his older brother John.  He continued his commute to work in Glasgow until the age of 77.

“He was a gregarious and sociable man,” Ruth said. “He had a wide range of intellectual interests and was a member of various societies and organisations, ranging through science, arts and politics.

“Politically he was a Liberal supporter and member of the Fabian Society. He enjoyed sailing and the hills, and holidays were spent in Scotland or touring Europe. Into old age he kept up correspondence with a wide range of family, friends, business and other contacts.”

After the Second World War and its aftermath, Walter and Anna Blackie were in their 80s and The Hill House was not really suitable for them.

However Walter had no intention of moving from the house he had lived in and loved since 1904. He died there on February 14 1953 at the age of 92.

Before the end of that year, youngest daughter Agnes, who lived with her parents, moved with Anna to Moraig, Rowallan Street, a villa designed by A.N.Paterson.

The Hill House was bought by the Lawson family and was later for a time under the ownership of the Royal Institute of British Architects before being taken over by the National Trust for Scotland.