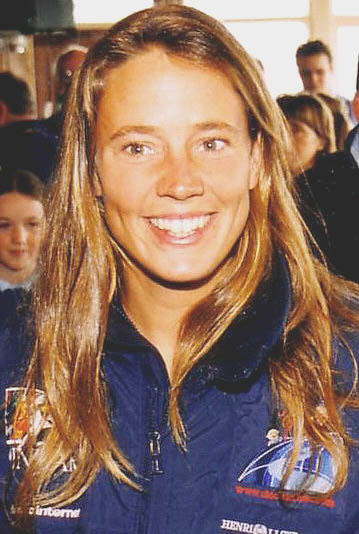 A HELENSBURGH woman sailed into the record books in May 2003 when she became the first British woman and youngest ever competitor to complete the longest race for any individual in any sport, around the world alone.

It was an achievement which was to earn Emma Richards, now Mrs Sanderson, the MBE and a revered place in the history of her sport.

Born on October 10 1974, Emma came to Scotland at the age of five when her father was appointed in 1980 to the Chair of Aeronautics and Fluid Mechanics at the University of Glasgow.

The family settled in Helensburgh, an ideal location for them to indulge in their hobby of sailing, an activity at which Emma excelled at an early age.

The Lomond School pupil learned all the basic skills at Helensburgh Sailing Club, starting in Optimists and egged on continuously by her elder brother Andy who has his name on most of the club trophies. At the age of 11 she competed in dinghy world championships.

She continued her interest in sailing when she went to the University of Glasgow. She was captain of the Glasgow University sailing team for two years and she also captained the Scottish Universities sailing team in 1995.

By the time she graduated in 1996 with a BSc in Sports Medicine she had already been a member of the Scottish National Olympic Training Squad since the age of 16, and where she had her introduction into professional sailing.

She was then chosen as a crew member aboard Tracy Edwards' all-girl Royal Sun Alliance which tried to win the Jules Verne Trophy. The girls were on course to capture the record when their yacht was dismasted in the Southern Ocean.

Her most famous voyage began on September 15 2002 and saw her sail round the world in the Around Alone race, an epic achievement as she completed the 29,000 miles in her yacht on May 4 2003. She wrote her own account in her book ‘Around Alone’ published in October 2004.

She gained international media acclaim for her talent, guts and determination as she competed on board her 60 foot yacht ‘Pindar’, named after the international print and electronic media company of the same name which had sponsored her for five years.

Around Alone is the ultimate yachting marathon. Emma was at sea for over 135 days on her own, during which she survived a hurricane, a terrifying climb of her 80 foot mast, a pirate scare and the extreme conditions of the Southern Ocean — one of the most remote and inhospitable places on the planet.

As well as coping with the elements, Emma, a self confessed people person, also had to deal with the solitude and loneliness of solo sailing, which is one of the hardest aspects of the nine month race.

"You have to be a jack-of-all-trades," she said, "always watching things like battery voltage and your food levels. It's as much project management as it is sailing."

The MBE award in the 2004 New Years Honours list was also in acknowledgment for the work she had done and continues to do in her role as an Ambassador for the HSBC Education Trust.

This Trust aims to raise standards in education by providing students with inspirational experiences beyond the classroom, and Emma committed a large amount of time during and after Around Alone to supporting the Trust’s hard work.

Emma said at the time: "I’m absolutely thrilled and humbled to receive an MBE. I'd like to thank my sponsor, Pindar, my family and everyone for the tremendous support that I received from all around the world during my solo circumnavigation.

“I couldn't have completed my 132 days at sea without everyones continual support, so to be given this great honour is as much for them as it is for me. I also think that this is good for sailing as a sport, which does not often receive the recognition of mainstream sports such as rugby or football."

Dame Mary Richardson, chief executive of the HSBC Education Trust, commented: "I am so pleased for Emma. Her work for the Trust, particularly the summer sailing schools, continues to be invaluable and she thoroughly deserves the accolade bestowed upon her.”

Andrew Pindar, chairman of the Pindar Group, said: "We could not be more proud to be associated with her and her achievements. Emma has courage, talent and determination in equal measure and I am so pleased that her accomplishments have been recognised in this way.”

She was also named Young Alumnus of the Year in 2003 by Glasgow University in recognition of being one of Britain's most talented young sports stars.

Emma returned to the water in 2005 when she competed in her Open 60, Pindar AlphaGraphics, on the 2005 IMOCA Open 60 circuit.

She continues her work as an ambassador for the HSBC Education Trust where she gives young students the chance to get out on the water and learn to sail — in 2006 over 150 students had this opportunity.

In 2007, Emma concentrated on the building of Pindar's new Open 60 in Auckland, New Zealand.

Named as Scotland's most eligible woman in 2002 in a Scotsman poll and a keen snowboarder, Emma married another internationally renowned Transatlantic helmsman, Mike Sanderson, on May 26 2006 at the Royal Yacht Squadron, Cowes, Isle of Wight. They now live in Spain and have a young daughter.

Mike, from Whangarei in New Zealand, was awarded the prestigious accolade of ISAF Rolex World Sailor of the Year for 2006 by the International Sailing Federation.