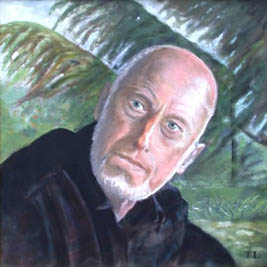 HELENSBURGH man Terry Lane, who now lives and works in Italy, has published his second book.

“Side by Side”, his history of Edinburgh’s Traverse Theatre of which he was the first artistic director and manager, is a very much a labour of love as he and his late wife Ros were instrumental in its launch.

Terry said: “The book contains a blow by blow account of the problems, tensions, manipulations, and successes encountered in its formative year.”

It was formally unveiled to the press at a reception in the Traverse Theatre Bar Café, but it was very appropriate that the first copies sold were in Bookworms, the East Clyde Street bookshop which the couple opened and which is now owned by Sarah Scott.

Ros, known in her acting days as Rosamund Dickson, died in 2005, and Terry now enjoys Italy’s better weather as he paints portraits (including his self-portrait right) and writes magazine articles and books, this being his second. His previous book, “The Full Round”, was a biography of the late Stephen Joseph.

Born in Woodford, Northamptonshire, Terry began his career in the London West End offices of impresario Jack Hylton, and went to stage manage at Bromley, Pitlochry, Perth and for Stephen Joseph’s Theatre in the Round company in Scarborough and on tour.

While they were all working in Pitlochry, Terry, Ros and actor John Malcolm formulated their plans for the Traverse Theatre Club, and in 1962 they went to Edinburgh and set it up.

Writing an introduction to the book, well known actress Colette O’Neil, who gave a moving tribute at Ros Lane’s funeral in St Columba Church, takes up the story.

“The dream did become a reality – the Traverse Theatre,” she writes, “the first of the avante garde club theatres in this country.

“We take them for granted nowadays. There are so many experimental theatres, studio theatres, fringe theatres. But it was a very different scene then, when the first of the studio theatres opened its doors in Edinburgh’s Lawnmarket.

“I was fortunate enough to be in the cast of the first production with Ros and Clyde Pollit; Terry directed. But while Clyde and I went home in the evening to rest and learn lines, Ros and Terry were spending their evenings completing the auditorium.

“I remember one day at rehearsal they got news of an old cinema, which had closed down and was selling off its seats, and they rushed off to buy them.”

Two years later Terry and Ros married, and Terry left the Traverse to run the 1964 season in Scarborough. Over the next few years he directed in London. Pitlochry and Stoke-on-Trent, and then became the first director of productions at the Midlands Arts Centre.

In a complete change of direction they moved to Helensburgh and opened Bookworms, but both continued in the world of drama by working for the Scottish Community Drama Association — an organisation which Ros, a mother of three, helped until just a few months before her death.

The book is a personal narrative of the first 20 years of a life working in the theatre, leading to and detailing how one of Europe’s leading experimental theatres came into being. It also some contains some wonderful photographs of the time.

It is published by Editioni Duca della Corgna, and costs £14.99.