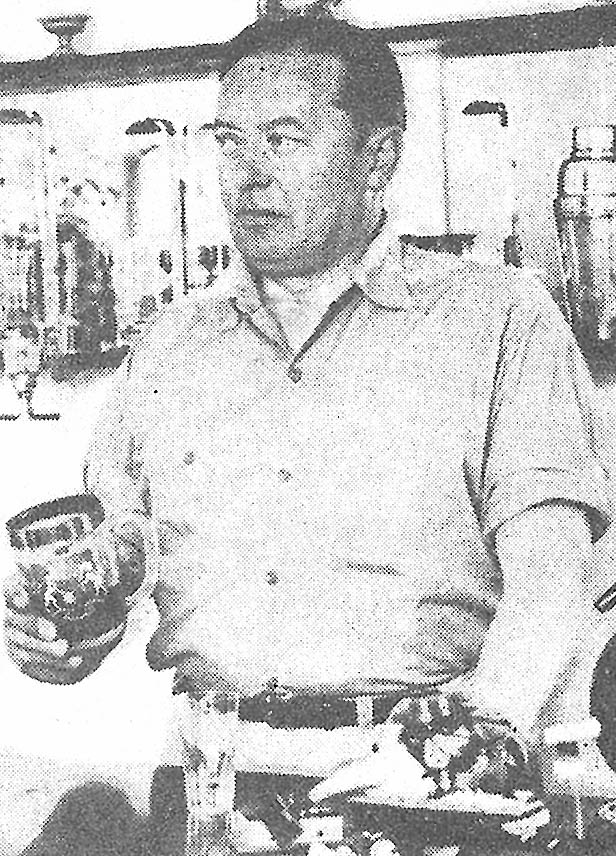 AN AUTHOR of international best sellers wrote his first book during the ten years he lived in Cardross.

Bernard Attenborough, who used the pen name James S.Rand, became world-renowned as the author of exciting novels, mostly based in Africa.

He and his wife Eileen lived at Greyfriars, Darleith Road, in the village from 1955-65 and were well known local residents. They also had many friends in Helensburgh.

Their son Mark, who died in a tragic shooting accident in Ayr in 1975, attended Larchfield School in Helensburgh while his sister Jill attended St Bride’s. The two schools later merged to become Lomond School.

They moved to Cardross when Mr Attenborough, from Mosley, Birmingham, became managing director of Osborne and Company (Glasgow) Ltd., a firm of metal merchants, a post he held until he started to make his name as an author.

But his business career followed a number of years as a journalist. For some years he was based in London’s Fleet Street, and was a correspondent and contract writer for British and American magazines. He turned to fiction writing by accident.

He became involved in a wager with other correspondents to produce a short story in the authentic style of a certain famous thriller writer in six hours.

Having succeeded in this, he devoted more time to contributing articles and short stories in addition to his journalistic work, and was finally persuaded to write a full length novel.

The result was ‘The Stake’, the success of which encouraged Mr Rand largely to abandon journalism to write what became his best known book, ‘Run For The Trees’.

The Boston Globe said of it: “His descriptions of scenes in the Dark Continent are beyond compare.”

International critics described it as “probably the finest book ever written about White Hunters in the African bush”, and drew parallels with Ernest Hemingway. Corgi made it their paperback of the month in July 1968.

Next came ‘Viva Ramirez’, set in the humid jungles of Central America, of which he said: “It has a hunting background with political overtones, and is set in the Guatemala and Honduras area. In fact I doubt if I will ever be allowed back to Guatemala!”

His next book had a change of name. Its working title was ‘The Bloody Sun at Noon’, but it was published as ‘The Great Sky and the Silence’.

He explained: “My wife picked up a book which had the original title — a line from the Ancient Mariner — when she was in Salisbury, Rhodesia (now Zimbabwe), so I had to go back to the title I had first thought of.”

It was also Mrs Attenborough who was responsible for the family leaving Cardross and building a ranch-type house in extensive grounds at Heads of Ayr. Although born in Kelvinside, Glasgow, she grew up in Ayr and always wanted to return there.

She first met Bernard in Lisbon, Portugal, shortly after the end of the Second World War. She had just come off a banana boat after serving in the WRAF, attached to a fighter squadron, and he was on a journalistic assignment.

She decided to go for a swim at a nearby beach. “I was in the water when this thing passed me like a torpedo,” Bernard recalled. “It was Eileen, and we were married two years later.”

A traditionally-educated Englishman, he became a big-game angler and an expert marksman. He travelled on safari frequently, sometimes with his family, to research the background for his books.

He had a hunch that a formidable number of readers like their escapism bounded by an open sky, and it proved to be correct.

He was once accused of writing to a formula of ‘hunting and sex’, to which he replied: “Well, I know a little about hunting, and I remain, basically, a reporter. I am also a Square.

“Most Squares, I think, subscribe to the belief that sex is a true part of life. And most reporters worth a damn believe in Ernest Hemingway’s dictum of writing truly.”

He always stressed that his work was as accurate as research and some personal experience enabled him to make it.

After their son’s death the Attenboroughs moved to Compass Hill, Kinsale, County Cork, where he collapsed and died in April 1982. His funeral was held at a Dublin crematorium.