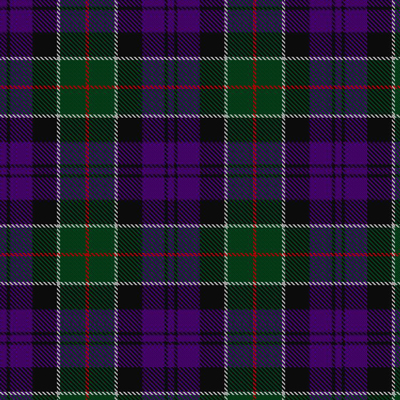 SIR James Colquhoun of Luss registered the Colquhoun tartan with the Highland Society of London in 1817.

Sir James was born in Edinburgh on September 28 1774. It is recorded that he raised a company of volunteers in his father’s territory — the glens of south-western Loch Lomondside — and was appointed their captain “at a young age”.

It may be guessed that this would have been around 1790, when he was 16 years-old.

Aged 18 he joined the 97th, Inverness-shire, Regiment of Foot. In 1799 he married Janet Sinclair of Ulbster.

Shortly after 1800 Sir James raised another body of volunteers on his father’s estate. This was called the Luss & Row Volunteers (Row is now spelt Rhu). In 1805 he took up permanent residence at the family seat, Rossdhu, Luss, to take personal supervision of the estates. He is said to have been on the best of terms with his tenants and clansmen.

Sir James registered the Colquhoun tartan with the Highland Society of London on May 29 1817. This sett was also in the Cockburn Collection (1810-1820). The pattern was listed with Wilsons as “superfine” and was therefore likely to have been regarded as a clan tartan prior to the end of the eighteenth century.

The sett is a variation on the basic green, black, blue structure of the military tartans which were being commonly used by the latter part of the 1700s. It may well be, therefore, that Sir James had kitted out his 1790 volunteer corps with this sett and as such it may have made its first appearance.

By the time he registered the sett in 1817, significantly it appears to have been regarded as a clan tartan for a number of years. Sir James had been living and working among his own clans-folk in Luss parish for a dozen years. If, by any chance, there actually had been a particularly favoured traditional pattern worn by the folk of his district, he — unlike many clan chiefs — would have been in a position to know.

Interestingly, we can infer from Robert Burns’ record of his Highland Tour that tartan was being worn in the Luss district very soon after the lifting of the Proscription against Highland dress. Indeed, as evidence suggests that this Act was largely ineffective, it may well have been worn during the period of Proscription. The possibility of continuity of tradition from the pre-’45 era should not be ruled out.

Having speculated in this way, it would still be more likely, on balance, that the military origin, circa 1790, is authentic. This view is shared by Peter MacDonald, the Scottish Tartan Authority’s Head of Research.

Robert David Colquhoun of Tullichewan raised the Kemaon Battalion of Gurkha Rifles in 1815. Arising from this, in 1928, permission was granted to the pipers of the 3rd Gurkha Rifles to wear Colquhoun tartan.