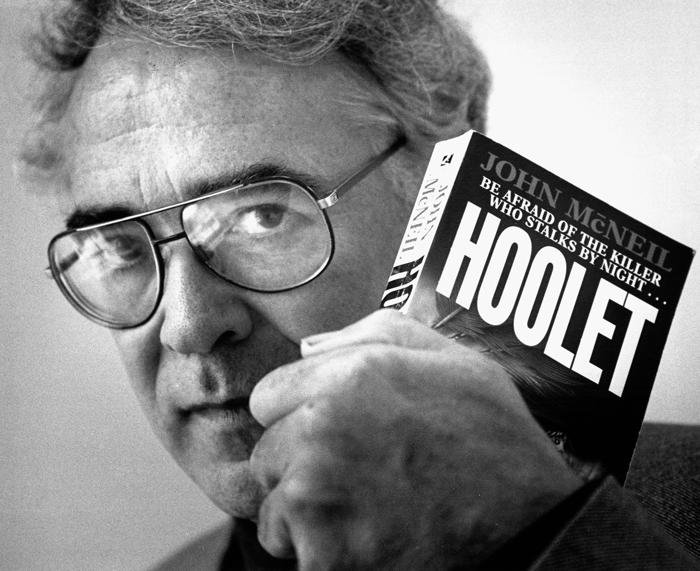 A LEADING figure in Helensburgh and district politics was actually a computer pioneer and a successful author and screenwriter.

John McNeil, chairman of Helensburgh SNP, spent 15 years of his life in the town, many of them while personally renovating the art deco mansion Green Park in Charlotte Street, before his death at the age of 64 on October 22 2004.

But he was known in the computer world as one of the co-founders of Britain’s first major computer software company Logica, and in the literary world as a best-selling author of dramatic novels including Hoolet, a racy story about a serial killer set in and around the burgh.

Born in Oxford on December 16 1939, John grew up in London where he was academically brilliant but also misbehaved, eventually being expelled from his grammar school.

Despite this he won a place at London’s Imperial College, graduating in 1961 with first class honours in aeronautical engineering.

But he decided against a career in the aircraft industry, and followed one of his maths professors into an infant and exciting new industry, computing.

He joined Scicon, an American company which was branching out in Britain, and quickly progressed from programmer to consultant to divisional manager and, aged only 29, to assistant general manager.

He did such a sterling job of helping BP model their oil business in the Middle East that they decided to buy the company.

In 1969, John and four others left to found Logica, one of the success stories of British computing.

The little company grew into an international plc, with thousands of staff projects underway in every significant area of commerce and government.

He left Logica in 1977 and joined Data Logic, heading its marketing and setting up a consultancy division.

Further major projects followed, including IT and communications advice to the police, war-gaming with the Ministry of Defence, and the development of an IT strategy for the Post Office.

It was while he waited to take up the post at Data Logic that he found a new diversion — writing.

He completed his first novel, The Consultant, in 1978. One of the earliest novels on computer crime, it was turned into a major TV series by the BBC, and it was the start of John McNeil’s emergence as an author.

Spy Game, Little Brother and Hoolet followed, but while writing and business co-existed for some of the time, eventually the creativity drowned out commerce and he became a full-time writer.

John branched into preparing screenplays and wrote Crossfire, a BBC drama about the IRA, and Shoot to Kill, in Northern Ireland. He also became chairman of the Writers Guild of Great Britain.

An art enthusiast, in 1989 he moved to Helensburgh and bought Green Park, a 2-storey flat-roofed L-plan asymmetrical Art Deco house built in 1935, because it was big enough to display his collection of modern art.

He set about painstakingly restoring it through his own work as plasterer, glazier, roofer, plumber and electrician, and it took 12 years before he considered it completed.

In the meantime he joined a small energy conservation company, Heatwise, in Dumbarton in 1992, renamed it Solas — meaning “hope” in Gaelic — and turned it from a struggling venture into a thriving success, and in the process winning awards for business excellence.

Solas was a community business and a registered charity working specifically with the poor and elderly. It had no shareholders and any profit went straight back into the business.

John believed Solas showed the future, a source of local employment with low costs and high social benefits, and championed this message to anyone who would listen.

Throughout his life he made time for his other great love, politics. Always a socialist, he was an active Labour supporter in London in the sixties, but in later years he became a committed member of the SNP, serving as the chairman of the Helensburgh and district branch.

He was also a regular writer of letters to the editor of The Herald, and he had a great many strong views on a wide range of issues — yet his letters were always eloquent, principled and elegantly simple.

He was survived by his wife Mary-Ann, who died two years later at the age of 65, and son Rufus.

A friend of his, freelance graphic designer Peter Taylor, paid this tribute . . .

"I worked with him on many projects at both Data Logic and Solas and elsewhere. He was my favourite client and a good friend as well. Among other things we shared an interest in 1930’s modernist architecture.

"I first met John when he joined Data Logic, which was already a client of mine. We worked together on a new corporate identity for the company and subsequently many brochures and advertising campaigns.

"When Data Logic was taken over by Raytheon in about 1980, he moved to a company called DataSense which also operated as Science Systems. Again he involved me as designer. I think John was a full director there as well as marketing director.

"After a couple of years his writing career had taken off, so that he was able to give up the ‘day job’ and move to Helensburgh. I had meanwhile moved from London to North Wales but we kept in touch.

"For a time John was producing two novels a year, which gave him a good income. Then I understand that the publishers changed their policy and would not commission a new novel until they had the sales results from the previous one.

"This virtually halved his income and led him to join the organisation that eventually became Solas. I was also engaged as graphic designer for Solas and made several trips to Helensburgh where I stayed with John and Mary in their wonderful house.

"What a tragedy that he died at such a young age. He is missed by all his friends."