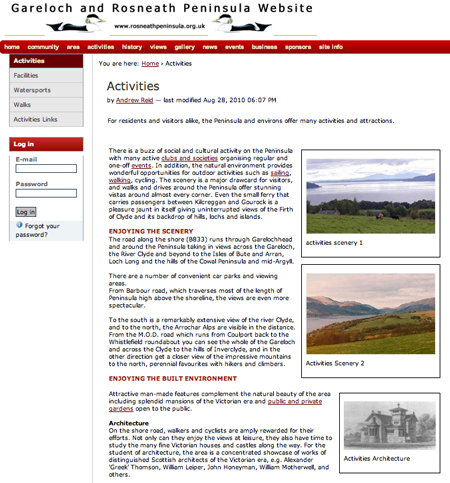 ONE of the oldest and best of the many local websites is the Gareloch and Rosneath Peninsula Website — but now its future is under threat.

Its current home page states that it will be going offline on May 24 after more than a decade, and if it does it will certainly be a loss to the district’s internet presence.

It contains a wealth of information and images from the peninsula villages, including local news and views, services, clubs and societies, the arts, churches, community facilities and events, nature, gardens, walks, history, and links to other local websites.

The problem now, website administrator Margaret Isaacs says, is a lack of volunteers willing to give up some of their time to run the site, and the cost of paying web server fees.

It all began at a public meeting convened by her in November 1998 — long before many other local sites were even thought of — when she outlined her vision of a community website for Cove and Kilcreggan.

She said: “My idea was to bring together local information covering news and events, clubs and societies, organisations and services, businesses, local history, natural history, etc. The interactive site would enable community organisations to contribute and edit their own information.”

The meeting was enthusiastic, and broadened the idea to include all of the Rosneath Peninsula and the village of Garelochhead.

Within a few weeks seven volunteers formed the GARP Web Group and started to build the site. Many people contributed; most notably local historian Alistair McIntyre, now a director of Helensburgh Heritage Trust, with content, and Lee Robinson with coding and design.

Within just six months, a prototype site was demonstrated to the group, and the domain name www.rosneathpeninsula.org.uk was registered.

The project won a lottery award which helped with launching the site in November 1999, and within a year it was awarded a commendation in the Scottish government-sponsored Winners@Web Competition.

Margaret said: “As well as clubs and societies adding their own information, contributions came from many sources, including people living abroad who had grown up locally or spent time on the Peninsula, such as war service during World War Two.

“Making the community aware of the project was an ongoing mission. The GARP Web Group provided an internet-connected computer for public use in the local library and ran internet training sessions.

“This helped to increase community involvement, and many groups successfully updated their own information and added their event data regularly. Four years on, the GARP printed directory of businesses and community organisations was produced, and in the following two years further commendation awards for community websites followed.”

In 2009 the group looked into more sophisticated systems for running the website, and Alun ap Rhisart redeveloped it to give a completely new look and a great deal more functionality. Andrew Reid reorganised and enriched the content.

Once the new look site was online, more training sessions were organised for community groups, and all seemed set fair. But in the last few months it became clear that there was a doubt over its long term viability.

Now a special note on the home page states: “Statistics suggest it still is of use to many, but running a site like this does take people’s time to keep it updated, and effort to raise sufficient money to pay for the server fees.

“Such time is in short supply, so the decision was made not to renew the server rental for another year.”

Margaret added: “Now there is a great deal more choice available to the public for accessing and publishing online information, and the GARP Web Group’s ongoing challenges of time, money and maintaining interest have become more acute than ever.

This website would be a great loss to the peninsula, and it is to be hoped that people will come forward to lend their support, and perhaps a firm could sponsor the server fees. Anyone who is interested in helping to keep it going is asked to email This email address is being protected from spambots. You need JavaScript enabled to view it..