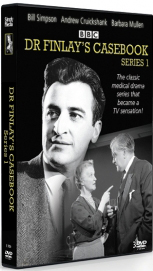 THE first twelve episodes of the very popular 1960s medical drama Dr Finlay’s Casebook — based on stories by the Cardross-born and Helensburgh and Dumbarton-educated best-selling author A.J.Cronin — have just been released on dvd.

Starring Bill Simpson and Andrew Cruickshank, the series is set in a medical practice in the fictional Scottish village of Tannochbrae, the series follows the experienced and mildly conservative Dr Cameron (Cruickshank) and his adventurous and enquiring junior partner Dr Finlay (Simpson). The supporting cast includes Barbara Mullen, Eric Woodburn and Effie Morrison.

In August 2012, at the suggestion of Paisley man Rob Campbell, BBC Alba screened some episodes to mark the 50th anniversary of the programme’s first screening in 1962. The first episode was screened exactly 50 years later, to the minute.

Rob said: “I am virtually certain that Cronin’s model for Tannochbrae was Garelochhead, and his inspiration for Dr Cameron was fellow Glasgow University graduate Dr George Imrie, who lived at the villa Dunivard near the railway station.”