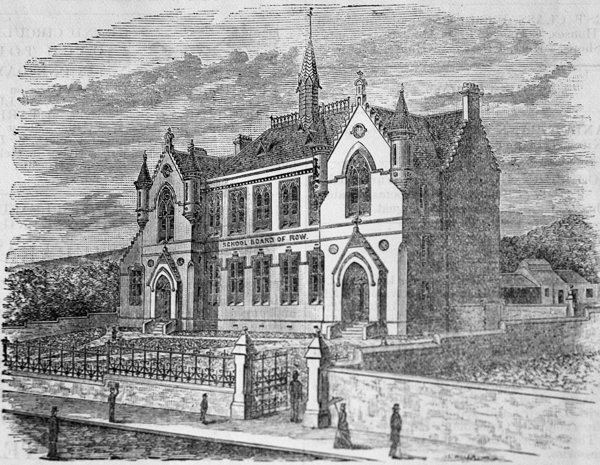 HELENSBURGH is renowned for its grid pattern design, which was the vision of one man.

William Spence is not a household name, unlike the town’s founder, Sir James Colquhoun of Luss, Baronet, after whose wife Helen the town was named.

But he was the man Sir James turned to for the layout, and he chose the now famous grid pattern of streets, with occasional curves such as Sutherland Crescent.

William Spence was a Glasgow architect who built up much of his practice in the Helensburgh district — building amongst other things St Columba Church and the original Hermitage School — and he lived in the town for his final 25 years.

According to an obituary published in the Helensburgh and Gareloch Times on June 27 1883, he was born in Biggar early in 1806, but other sources suggest he might have been born in Carstairs.

He was the second son of shoemaker John Spence and his wife Margaret, nee Kean, and his brother was born in Carstairs in 1804 and a sister was born there in 1809.

His first job was working for Glasgow architect John Bryce, probably in the Castle Street office of William Burn and David Bryce. The first large house he is associated with is Coulter Mains at Biggar, built in 1838.

According to the Scottish Architects website, he made his name early as a theatre architect, designing two of Glasgow’s earliest theatres, the City Theatre at Glasgow Green and the original Theatre Royal.

He went on to design various early department stores and warehouses in the city centre in Italianate style, pioneering the use of cast iron in facades.

Next he established a strong presence in Helensburgh and also a significant domestic practice in Ulster.

The obituary records: “It was Mr Spence who, at the order of Sir James Colquhoun, constructed the plans on which the town of Helensburgh was to be built, and the plans were, on the recommendation of Mr Spence, at a subsequent date extended and improved.

“As an architect he held a prominent position. His opinion was frequently consulted in the Glasgow Dean of Guild Court, and his advice was always regarded in that court as worthy of adoption.”

He designed the pier and esplanade in 1859, a tenement in East Princes Street in 1877, and Hermitage School in East Argyle Street.

The August 6 1880 edition of Building News featured the opening of the new school built for the School Board of Row.

It reported: “The building is divided into two portions for girls and boys and is Gothic in style; the main frontage is 115 feet in length, and is broken up by turrets, iron-crested steep roof and central belfry.

“There are eight rooms in all, so separated by movable partitions that they can be thrown in three large apartments. The upper parts of these partitions are glazed, and there are four other classrooms.

“The windows are placed high, and are fitted so as to allow heated air to escape without causing a down-draught. The heating is by hot-water pipes.

“Adjoining are large playgrounds, and a janitor’s house. The total accommodation is for 500 children.”

The school, built on land formerly part of Hermitage House and made available by the Cramb family, was demolished in July 1977 a year after the staff and pupils had moved to Colgrain. It had only five headmasters.

Only the janitor’s house still remains beside the current Hermitage Primary School.

The obituary refers to the school and St Columba Church as his masterpieces. 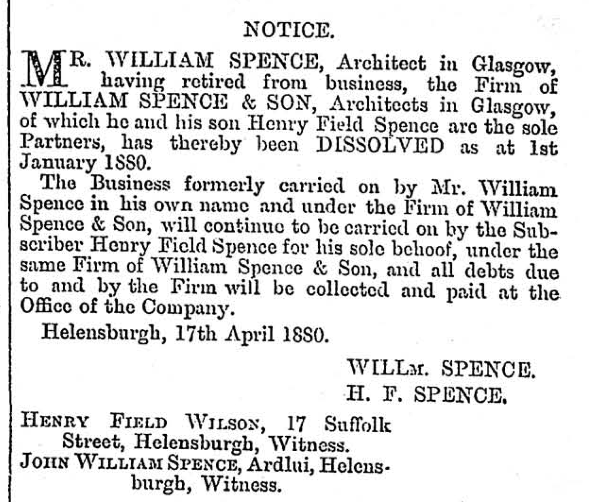 William Spence moved to the burgh 25 years before his death, building Ardlui House, 5 East Montrose Street, which he sold to ex-Provost Thomas Steven and then building Ardlui at 22 Charlotte Street, where he spent his later years.

He married Margaret Field, and they had two sons, John William Spence and Henry Field Spence. Henry set up his own practice in the city in 1876, but then returned to his father’s practice which became William Spence & Son.

He retired at the end of 1879 and his partnership with Henry was dissolved, with Henry carrying on the business.

William Spence suffered for some time from liver disease, and that was the cause of his death at Ardlui on June 22 1883 — three years after his wife.

He was buried at Glasgow’s Necropolis and left moveable estate of £2,414 and significant heritable property.