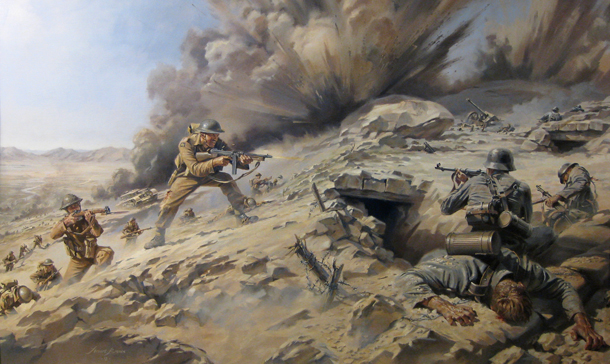 A DRAMATIC newly-commissioned painting commemorating the role of the Argyll & Sutherland Highlanders in the victory at the Battle of Longstop Hill in North Africa in 1943 was on display in early June on the balcony in Helensburgh Library in West King Street.

It is being taken round the main towns in Argyll and Bute and was in Helensburgh until Saturday June 15, and it then moved on to Inverary. Its final home will be the Argyll and Sutherland Highlanders Museum at Stirling Castle.

The painting, by renowned military artist Stuart Brown, shows Major John 'Jack' Anderson in action leading the remnants of the 8th Battalion Argyll & Sutherland Highlanders, supported by the Churchill tanks of the North Irish Horse, against enemy positions during the assault on Longstop Hill in Tunisia.

He was awarded the Victoria Cross for his gallantry and leadership. An accompanying banner gives detailed information.