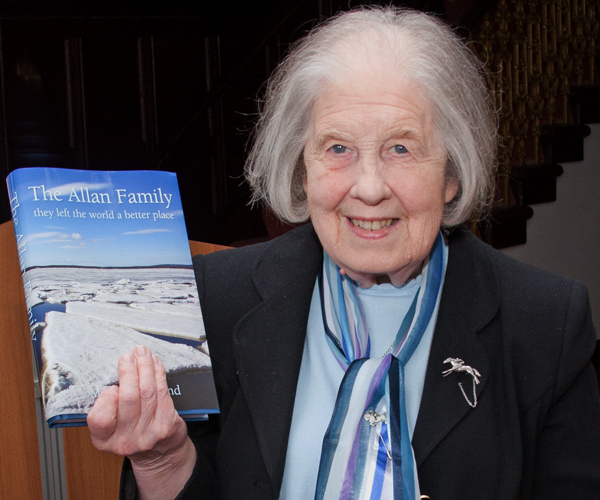 A BOOK which features the lives of a well known 20th century Cardross family, “The Allan Family: they left the world a better place”, was officially launched in Helensburgh on June 6.

Maureen Borland’s fourth book tells the story of the Allan family of Scotland and Canada, shipowners and founders of the Allan Steamship Line, the world’s largest private steamship company — said to be the inspiration for the Onedin Line 70s TV drama series.

A branch of the family lived in Cardross for over 40 years, and one member served for a time as a Matron at Helensburgh’s Braeholm Nursing and Maternity Hospital.

So it was appropriate that the book was officially launched in Braeholm, now a Royal Sailors Rest, in the presence of people who had helped Maureen in compiling and publishing it — including Allan descendant Michael Allan Wilson — and other friends.

Maureen said: “It has been a great pleasure to write this book about the Allans. They are a fascinating family.

“The sales from the launch and since then have been amazing, which delights me as I’m 79 now, and this will be my last book.”

The Cardross connection began in 1908 when shipowner Claud Allan rented the impressive 21-bedroom Victorian mansion Kilmahew and its extensive grounds, including magnificent gardens, from John William Burns, another shipowner. He bought it eleven years later.

The book is available, price £15, from Maureen at www.borland-maggs.com.