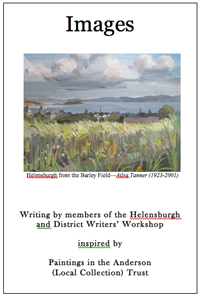 A FASCINATING booklet which is a collaboration between two Helensburgh organisations is the inspiration of the 2014 Anderson Trust Exhibition.

The booklet is entitled ‘Images’ and contains writing by members of Helensburgh and District Writers Workshop. The Exhibition opened in Helensburgh Library in West King Street on Monday February 3.

The prose and poetry itself was inspired by the paintings in the Anderson Trust Local Collection, which is housed in Helensburgh Library, and the book was edited and published by Anderson trustee Mary-Jane Selwood.

Trust chairman William Anderson said: “My aunt, Miss Nance Anderson, would have been delighted with the idea of a collaboration between the Trust and the Workshop. She would also have been very pleased with the results of the collaboration shown in this attractive booklet.

“She was interested in all the arts including theatre, and she often spoke of teaching W.H.Auden to waltz in one of her productions for the Helensburgh Amateur Dramatic Society during the time when he was a master at Larchfield.”

Following Miss Anderson’s death in 1980, the charitable trust was set up to fulfil her wish that her collection of paintings of local interest should be kept together to be exhibited in Helensburgh.

Subsequently another of her pictures was sold and the proceeds used to establish a fund, the income from which maintains the collection in good condition and enables the purchase of other works.

A selection of the paintings is shown annually in the library in West King Street, ensuring that they are regularly accessible to the public as Miss Anderson intended. Each exhibition focuses on a different theme.

The exhibition from February to June showcases the writing contained in the booklet with the works which inspired the writers.

Poems and prose about such iconic local views as Craigendoran Pier, Dumbarton Rock, Glen Fruin, or of such well-known local personalities as Gregor Ian Smith and Ailsa Tanner, will be on display side by side with the paintings.

Mrs Selwood said: "Whilst the content and initial inspiration for both the paintings and writings are strongly rooted in Helensburgh and surrounding area, they can both be interpreted in a much wider context and the title, ‘Images' is intended to encompass this."

The Workshop was set up in 1972, and has produced many talented writers, including novelists Robin Lloyd-Jones and Pat McIntosh. Many others have had poems, articles and short stories published, or broadcast on radio.

President Saskia Tepe said: "Creative narrative is often stimulated by what we see, and our current members are delighted to collaborate with the Anderson Trust to showcase work that has been inspired by these wonderful works of art."

The booklet is on sale, price £6, from the Scandinavian Shop in Sinclair Street, Helensburgh Library, and Ardarden Estate Shop near Cardross.