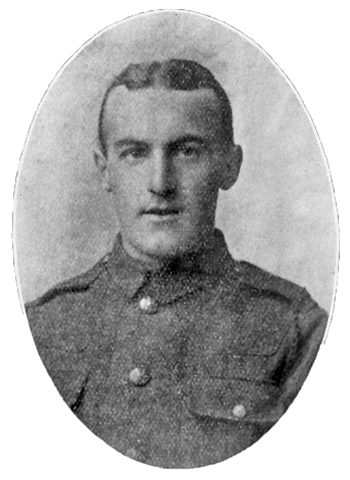 THE FIRST Argyll and Sutherland Highlander to be wounded in Flanders in World War One was shot in the big toe on his way to a trench.

Helensburgh-born Sergeant Adam Bain Paton, of A Company, 1/9th Argylls, was shot on March 7 1915 while on active duty at the front — and went to reach the rank of Major.

The wound was not considered serious, but he was at once taken to the coast and transferred to a hospital in Aberdeen, where he made good progress.

He wrote: “I regret to have to inform you that your brother was wounded last night. He was struck by a bullet in the big toe of his right foot.

“He was sent to hospital last night, and will be fit for duty in about a fortnight. He has the honour to be the first man in the battalion to be wounded.”

It happened near accommodation huts at Reninghelst, nine miles south of Ypres, the day A Company arrived there.

Sergeant Paton, an ironmonger to trade, returned to active service, and by 1918 had been commissioned as a Second Lieutenant in the 7/8th Battalion of the King’s Own Scottish Borderers. Later he attained the rank of Temporary Major.

He was the younger son of coachbuilder John Paton and his wife Lillias Glen, and he had a brother John, a stationer to trade, who was six years older.

Adam was 28 when he married 30 year-old Mary Clyde.

She was the daughter of famous actor and theatrical manager John Clyde — who starred as Rob Roy in the first ever Scottish movie — and his wife Mary, who at that time lived at 31 Windsor Terrace, Glasgow, before moving to Helensburgh.

They had one child, and she ran the M.Clyde confectioners shop at 41 Sinclair Street, almost next door to the Paton family home.

Adam was a keen member of the then Helensburgh Rowing Club and an enthusiastic swimmer.

Mary died in Glasgow on April 16 1954, and Adam, who progressed to becoming sales manager of a glass manufacturing firm before he retired, died on December 13 1961 at a city hospital at the age of 72.

He was survived by a younger brother, James, a grocer, of Kyra, 100 West Clyde Street.

The London Gazette of October 15 1918 and the Edinburgh Gazette two days later both record that he was awarded  the Military Cross.

The citation read: “For conspicuous gallantry and devotion to duty.

“This officer, finding himself after an assault on the enemy in command of the forward troops of his battalion, showed great skill in organising his men and consolidating the position.

“During the day he successfully beat off an enemy counter-attack. Altogether he set a very fine example to the men under him.”

Neither Gazette reveals where and when this brave act took place. He was also awarded the Victory Medal and the British War Medal.