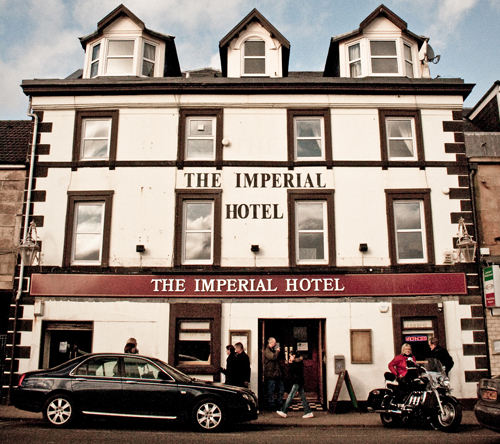 MANY Helensburgh people were sad to hear in February 2014 of the closure of the town’s oldest hostelry, the Imperial Hotel on West Clyde Street.

Originally the Tontine Hotel, what is now popularly known as ‘The Imps’ has seen and played a big part in the town’s history since the early years of the 19th century, not long after burgh status was gained in 1802.

Throughout that century it was in an ideal location for a pub to prosper, being across the road from the much used town bandstand and beyond it the pier.

Local historian Alistair McIntyre, a director of Helensburgh Heritage Trust, has researched its history, and he said: “When news of the closure prompted ex-Provost Billy Petrie to comment that it had been part and parcel of the original Helensburgh, he was indeed absolutely correct.”

In 1803, Donald Moody feued a piece of land on the north side of Clyde Street consisting of three plots, one of which was to be the location of what became the Imperial Hotel.

A couple of years later, when Donald and his mother formalised a life-rent interest in his purchase, his father was described as an innkeeper in Helensburgh while Donald was clerk to Archibald Colquhoun, a merchant in Greenock.

In 1807, Moody sold out to Thomas Napier, innkeeper at Drumfork, and two years later Napier formalised an interest in the property for Ann Miles, his wife.

At that time it was revealed that there was now a three-storey front house, as well as buildings and the rear and grounds. However, there was not yet confirmation of the existence of an inn or hotel.

In 1829, Ann was described as the widow of Thomas Napier, sometime innkeeper at Drumfork, thereafter in Helensburgh where he was also a wine merchant.

She paid off a mortgage of £500 for the land and buildings, a fairly substantial price in line with the £2,000 which Henry Bell received in 1810 when he mortgaged his Baths Inn, almost certainly to raise funds for his Comet steamship project.

In 1833, when Robert Glen, innkeeper, bought the property from Ann Miles, and the following year, Fowler's Directory describes Glen as proprietor of the Tontine Inn, or Hotel , offering ‘coaches, post chaises, noddies, post and job horses’.

In a document the following year Ann is referred to as formerly innkeeper at the Tontine, and now resident there.

In that respect, her later career seems to have mirrored that of Margaret Bell, who continued to manage the Baths Hotel for many years after husband Henry's death.

There is also the coincidence of the Napiers and the Bells setting up their respective hospitality businesses around the same time.

Alistair says that, from the available information, there is the possibility that John Moody established a hostelry at the site, perhaps as early as 1803, since that was his line of business, it being ideally placed to capture passing trade, whether by land or by sea.

This could account for the three-storey building in 1809, much bigger than other properties on the street.

At some stage before or during the ownership by the Napiers, the property came to be known as the Tontine Inn, a name shared by a number of  places with a similar function, for example the Tontine Hotel at Greenock's Ardgowan Square.

The word 'tontine' is Italian in origin, and refers to an arrangement where a number of subscribers agree to share the proceeds of an investment by way of an annual dividend paid equally to all.

As members of the group die off, the proceeds continue to be paid to an ever-decreasing number of beneficiaries, until the last survivor collects all the annual income.

Possibly the Napiers, or even their predecessor, came up with the scheme as a way of providing capital to help finance their business ambitions.

Architectural historians Frank Walker and Fiona Sinclair, in their 1992 publication “North Clyde Estuary: an Architectural Guide”, refer to the building as dating from around 1830.

It is possible that the three-storey building in existence by 1809 was subsequently remodelled, if not completely rebuilt, perhaps financed through the tontine method.

Alternatively, the 1833 purchase by Robert Glen could have seen a subsequent re-working by the new owner which would still match the approximation of Walker and Sinclair.

Glen borrowed £950 to finance his purchase, and, even allowing for inflation over the years, this would suggest that what he was buying already amounted to a substantial amount of real estate.

The Tontine Hotel continued to use the name for a number of years, and in 1854, Margaret Walker was the proprietrix. Around 1864 the name was changed to the George Hotel, with James Hamilton being the proprietor.

The Imperial Hotel name first appears in a Helensburgh Directory of 1878, when an advert refers to it as ‘newly appointed 1875’.

There was an important structural change in 1935, when the Imperial was formed into a limited liability company, becoming known as the Imperial Hotel (Helensburgh) Ltd. and by 1937 it was being managed by Andrew Inglis.

In May 1965, the company went into voluntary liquidation, but the hotel continued as a Helensburgh seafront fixture until its closure last month.

The hotel had a sad role after one of the Clyde’s worst ever tragedies when the steamship Telegraph exploded only yards away from Helensburgh pier on Monday March 21 1842 and 20 people died.

The Glasgow Herald of Friday March 25 1842 reported: “On Monday last, the most painful sensation was excited in this city by the news of the bursting of the boiler of the new steamer Telegraph, at the Quay at Helensburgh, and the consequent sacrifice of, it is believed, 20 lives, in addition to many who have been severely, if not dangerously, injured.”

All seemed well as the Telegraph, built in 1841 for the Glasgow and Helensburgh route by Hedderwick and Ransome of Kelvinhaugh, reached the pier and berthed. Some passengers alighted and others boarded.

As the 118 feet long vessel began to back away from the pier for the short journey to Rosneath, disaster struck.

The Glasgow Herald reported: “Just as the vessel was backing out on her voyage up the Gareloch, and the paddles had performed two or three turns, the boiler exploded with a crashing sound, which was heard for miles around.

“The boat was split from stem to stern and the deck timbers blown to fragments.

“The corpses of the dead and the larger proportion of the injured survivors were removed to the Tontine Inn where Mr Liddell, the landlord, and his family did all in their power to alleviate the sufferings of those to whom their attentions could be of any avail.”

Hopefully before too long the hotel will open again to resume its long history.