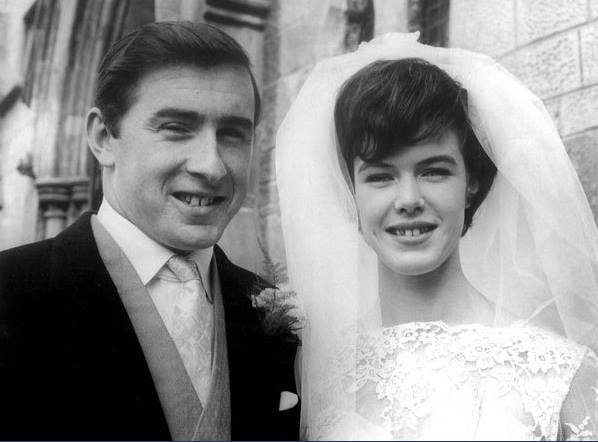 WEDNESDAY June 12 2014 was yet another milestone in the extraordinary journey through life of Sir Jackie Stewart, one of the greatest Grand Prix drivers of all time and a man with many Helensburgh connections, when he celebrated his 75th birthday.

A back number of the Helensburgh and Gareloch Times weekly newspaper provided this image from another of the great days of his life . . . his wedding to Helensburgh girl Helen McGregor.

It took place on Tuesday August 28 1962 in the now demolished St Bride’s Church, when the 23 year-old Dumbarton motor mechanic and clay pigeon shooting champion married the girl from McNeill’s Bakery in James Street.

The couple met on a blind date at Dino’s Café in West Clyde Street, and Jackie was soon a regular visitor at the family bakery run by Evan and Grace McGregor.

He proposed a year before the wedding when they were sitting in his car at the Kidston Park car park. Two years ago they celebrated their golden wedding.

They have lived for most of their married life in Switzerland, but regularly return to their Buckinghamshire home and to Scotland.