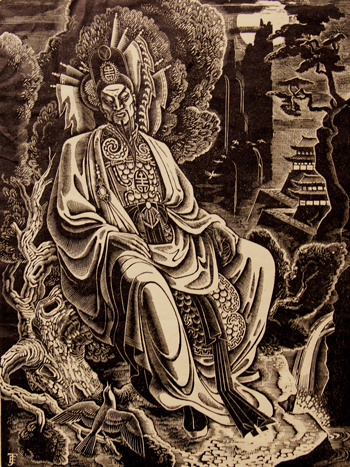 ONE of the works featuring in the current ‘Glasgow Girls: Artists and Designers 1920-1960’ exhibition in Kirkcudbright has been lent by Helensburgh’s Anderson Trust Collection.

It is a wood engraving entitled ‘The Emperor and the Nightingale’ by local artist, Elizabeth Odling (1924-2003).

Anderson Trustee Mary-Jane Selwood said: “This engraving is a masterful piece of work, particularly considering it was accomplished early in the artist’s career while she was a student at Glasgow School of Art.”

Curated again by Liz Arthur, the exhibition showcases the work of women artists, designers and craftworkers associated with the Glasgow School of Art during the early part of the 20th century.

“This is a unique opportunity to see a wealth of art work from this period, comprising loan items of remarkable quality that are still relatively unknown,” Mrs Selwood added.

The Anderson (Local Collection) Trust exhibition ‘Images’ in Helensburgh Library in West King Street has been extended until the end of July.

It features a selection of works from the Collection, accompanied by writings — poems or prose — inspired by the paintings. Those who have visited it have found it ‘thought-provoking’, ‘moving’, ‘entertaining’.

Mrs Selwood said: “Those who have not seen it: you have yet another three weeks to visit Helensburgh Library Gallery to be provoked, moved or, simply, entertained.

“The accompanying illustrated book ‘Images’ is not only a fine record of the exhibition, but a lasting pleasure to dip into or to send to friends.”

Copies are for sale, price £6, at the Library or from the Scandinavian Shop in Sinclair Street.