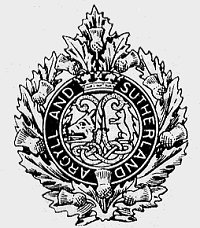 AN EXTRA attraction in the Heritage Centre in Helensburgh Library in West King Street from Sunday September 21 will be a special display by the Argyll and Sutherland Highlanders Regimental Museum.

The regiment historically recruited its soldiers from this area, Clydebank and Dunblane, and the exhibition — launched in Callander in July — tells the story of some of the servicemen’s outstanding bravery.

The archives and collections of the Stirling Castle-based museum have been researched to produce a First World War touring exhibition filled with emotive and informative stories.

It will complement a current World War One display prepared by the local branch of the Royal British Legion.

Robert Layden, the museum’s chief executive officer, will give a talk on the impact of World War One on Helensburgh, and the town’s connection with the regiment, at the Helensburgh Heritage Trust open meeting on Wednesday October 29 at 7.30pm.

The meeting will be held in the Trust’s usual venue, the upstairs meeting room in Helensburgh Lawn Tennis Club in Suffolk Street. Anyone interested is welcome to attend.

The museum receives some Ministry of Defence funding, but is almost entirely maintained through public donations. It is governed by a charitable trust, the Argyll and Sutherland Highlanders Museum Trust.