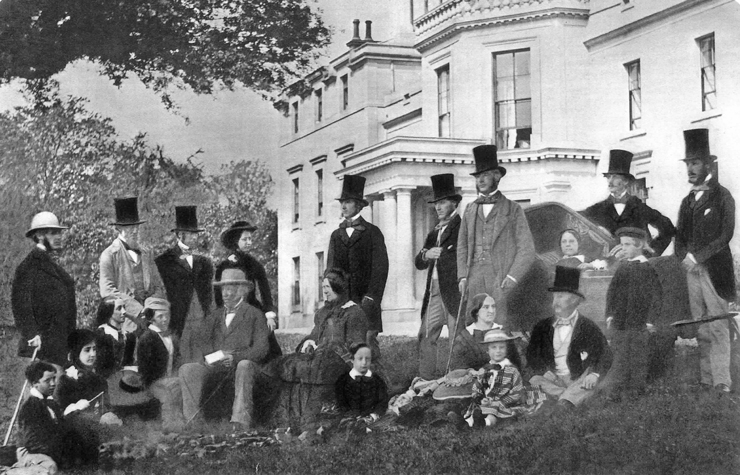 IT WAS a very different age when this stunning photo was taken at Camis Eskan House at Colgrain as far back as about 1857.

And in finding out about it, I learned for the first time that there was a Lord Campbell of Eskan and still is a Baron Colgrain.

Management training consultant Mark Campbell, who lives with his wife near Oxford, sent the image as he wants to discover more about the house where his great-great-great-grandfather Colin and his wife Janet lived.

He came across an article about the mansion — now divided into eight flats and three coach houses — on this Trust website.

The first Camis Eskan, up the hill on the east side of Colgrain, has wonderful views over the Clyde.

Their descendants lived there for nearly 500 years, until in 1836 the mansion was sold to Colin Campbell from Renfrewshire.

His descendants owned it until November 7 1946 when it was bought by the then Dunbartonshire County Council.

Well known Helensburgh architect Alexander Nisbet Paterson was commissioned by the then tenant, lawyer Leonard Gow, to modernise and extend the building in 1915.

During the Second World War it was requisitioned by the Government and used as a hospital for Polish Army casualties.

After the war the County Council used it as a hospital for, first, TB patients, then infectious diseases, then maternity, and finally geriatric use. For some years there was a camp for the homeless in the grounds.

A very different form of housing was introduced in 1979 when a developer transformed the building to its current use.

Mark said: “Our family was intrigued to learn that we owned the house until 1946.

“My father was born in 1915 yet neither he, nor my uncles and aunt, can remember the family talking about it as if it was still in their ownership.

Colin Campbell Junior, who died in 1886, succeeded his father Colin in owning the house and estate, as we have his will and other documents.

“He passed the house and estate to his second son, William Middleton Campbell, and he perhaps leased it out to tenants, as he spent his time in London, Kingston-upon-Thames and then Sussex.

Mark was sent the photograph by his cousin John Campbell, who inherited it from his father John — known as Jock — Campbell, who became Lord Campbell of Eskan and lived from 1912-94.

“Jock would have liked to have taken the title of ‘Colgrain’ rather than Camis Eskan when Harold Wilson made him a Life Peer in 1966,” Mark said.

“But his father, years before, had given a younger Campbell cousin permission to use the name when he was ennobled, never believing that any of his sons would reach such lofty heights!

“That helps to explain the title of ‘Baron Colgrain’ — Colin Frederick Campbell, president of the British Bankers Association from 1938 to 1946, was created the 1st Baron Colgrain in 1946.

A former publisher with the Oxford University Press, Mark went to Edinburgh University in the late 1960s, but his family were brought up in Kent.

He says that he can look back more than twenty generations in direct descent to ‘Sir Gillespic or Archibald Cambel’, who died about 1280.

“I relish the detective work involved in family history,” he said. “There is always more to be discovered and gaps to be filled – but I forever wish that more of all our ancestors had written and passed down a few notes about themselves, as dates alone are bare and sterile.

“My mother was a Macpherson, so I am equally interested in her side of the family, which we can also trace back several centuries.

“If any of your readers can point me in the right direction to discover more about the ownership and sale of the house to Dunbartonshire County Council, that would be greatly appreciated.” 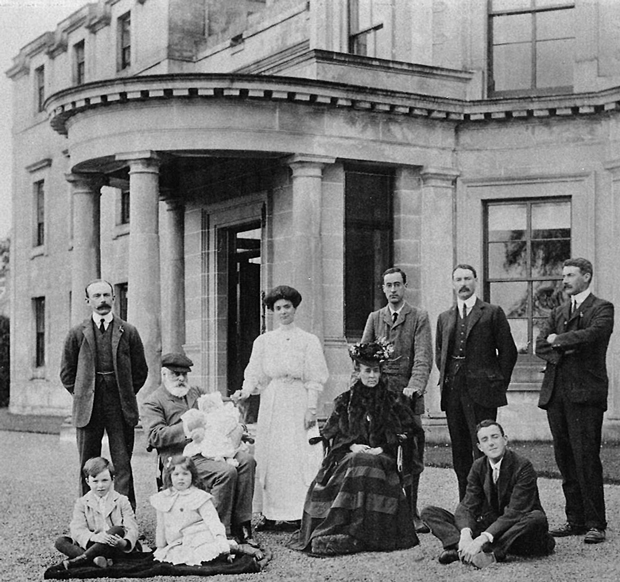 After Mark’s appeal he supplied a second family photo taken at roughly the same spot, but in 1907.

It shows William and Agneta Campbell and their four sons and only daughter Elsie, whose husband Sir Alfred Tritton and three of their children are in the group.

Where they fit in to the Campbells of Camis Eskan history has been researched by Helensburgh Heritage Trust director Alistair McIntyre, and this is his timeline . . .

As well as Camis Eskan House, the lands included at least six farms, various houses and other buildings, and plantations in the parish of Cardross.

1854: Public meeting held at Cardross in November 1854 to decide how best to contribute to the National Patriotic Fund, which was being set up to support widows and orphans of soldiers and sailors killed in the Crimean War.

The chairman, Colin Campbell of Colgrain, exhorted everyone to “do his duty”, and a committee was established. Camis Eskan and Colgrain were in Cardross Parish at that time.

Colin Campbell is quoted as proprietor of Camis Eskan and Colgrain, and is mentioned as one of the sources consulted about the meaning of several of the place-names appearing on the maps.

1891: Donald MacLeod, author of the book “Historic Families and Notable People of the Lennox”, devotes a section to the Campbells of Colgrain and refers to William Middleton Campbell, eldest surviving son of Colin Campbell of Colgrain and Jessie Middleton, his wife.

Born in 1849 William was educated at Eton College. He was a Justice of the Peace for the County of Dumbarton, one of HM Lieutenants for the City of London, and a director of the Bank of England.

The family lived at Coombe Ridge, Surrey, and William’s clubs were the Union, London and the Western, Glasgow.

1911: The Helensburgh Directory for 1911 lists Camis Eskan House as being occupied by William Middleton Campbell, D.L. He was spending much of his time elsewhere, while continuing to own Colgrain and Camis Eskan, and visiting from time to time.

What is almost certain is that in this period Camis Eskan House itself was not being occupied by anyone other than the Campbell family or their representatives.

1915: A supplement to the Helensburgh Directory of 1913, issued in 1915, revealed that Camis Eskan House had a new occupier, shipowner Leonard Gow, although was still owned by William Campbell.

His son Leonard Jnr (1859-1936) was senior partner in the shipping company Gow, Harrison and Co., a director of the Burmah Oil Co., and chairman of several other companies.

One of Glasgow's best known art collectors, specialising in pictures, etchings and Chinese porcelain, he was also a noted philanthropist, and founded the Leonard Gow Lectureship in Medical Diseases of Infancy and Childhood at Glasgow University in 1919.

1917: John Irving's book, “History of Dunbartonshire” (1917), refers to the estates of Colgrain and Camis Eskan as being under the ownership of William Middleton Campbell.

A Register of Voters revealed that the members of the Gow family at Camis Eskan were Leonard and Mrs Mabel Gow, along with John and Leonard Gow, both described as soldiers and probably veterans of the Great War.

1928: Colgrain and Camis Eskan are owned by Colin Algernon Campbell, of 20 Eastcheap, London. Camis Eskan House was still tenanted by Leonard Gow until his death in 1936.

1944: Colgrain and Camis Eskan are still owned by Colin Algernon Campbell, but Camis Eskan House was tenanted by Dunbarton County Council and used as hospital.

1946: Camis Eskan House was sold by the Campbells to the County Council on November 7 1946. Army Nissen huts in the grounds were used for many years for ‘temporary’ civilian housing.

1957: Colin Algernon Campbell, the last of the family to own Camis Eskan and the one who disposed of it, died on January 3.

1958: Helensburgh Town Council minutes refer to a letter received from the town clerk of Clydebank, concerning the Camis Eskan Hospital.

The Council discusses two options on the table: closure of the sanatorium, or change of use to accommodation for the elderly. They decided on the latter.

1960: The Helensburgh and Gareloch Times reports that the former army encampment has now been razed to the ground. However the concrete bases remain to this day.

1979: A developer turned the mansion into the flatted property it is today.