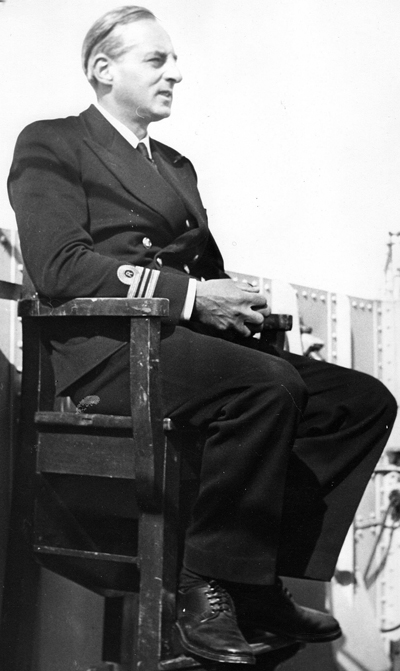 A HELENSBURGH man’s daring in World War Two was recognised in October 2014 with the award of the Arctic Star.

Alan, who moved to Hillcrest, 1 Golfhill Drive, from Glasgow towards the end of World War Two, was involved in a number of important missions.

His early war was spent on HMS Dorsetshire in the Far East, South Atlantic and off the African Coast chasing German raiders, and in actions against the Vichy French in Dakar.

He then moved to destroyers and, as 1st Lieutenant on HMS Brocklesby, he was awarded the DSC for “controlling the fire of the anti-aircraft armament with coolness and ability” following the withdrawal from the St Nazaire Raid in March 1942.

By August his ship was closely engaged in the Dieppe Raid, and went aground within 400 yards of the beach while giving direct support to the Canadian troops ashore and being peppered by fire from German 88mm.

Much of the remainder of the war was spent running out of Scapa Flow on convoy escort duties against the U-Boat threat in the North Atlantic and the Arctic.

This included a voyage to Murmansk, when he witnessed the sinking of the German Pocket Battleship Scharnhorst. His final act was to return home to the Forth escorting Hitler’s yacht Grille as a prize.

The Arctic Star, first awarded in 2013, is awarded to those who served in the most perilous sea passages of the conflict – the Arctic Convoys.

These notoriously dangerous voyages were famously described by Sir Winston Churchill as ‘the worst journey in the world’.

‘AK’ is the chief executive of the Highland Reserve Forces’ and Cadets’ Association and followed in his father’s footsteps with a military career in the Argyll and Sutherland Highlanders, while brother Michael is a marine artist based on the Isle of Wight.

Alan trained as a marine engineer and worked in the family engineering business before joining the RNVR in 1938.

He was mobilised in May 1939, little knowing that he would then spend six years at sea. He wrote an account of his wartime experiences — ‘Over The Horizon’ — which was published privately in 1999, raising a considerable sum for Erskine Hospital.

“It was an honour and a pleasure to meet Alan’s family,” said Captain Smith. “The journeys undertaken by the men and their ships as part of the Arctic Convoys was fraught with danger.

“As well as an ever present threat of enemy fire from both surface ships, aircraft and U-Boats, the weather was a formidable adversary, casting up freezing conditions and mountainous seas.

“Many, many ships and aircraft were lost and thousands of sailors perished.

“It was war at its harshest and Alan and his fellow sailors deserve the respect and admiration of us all for this most dangerous of missions which played a key role in the ultimate defence of our nation. We owe them all a great debt of thanks.”

AK said: "It was an enormous pleasure and privilege to be presented with my father’s Arctic Star by Captain Smith.

“As a keen campaigner for recognition of the many sailors who fought and perished in the Arctic, he would be delighted to know that the Arctic Star will now sit amongst his other campaign medals.

“He would be particularly delighted to know the presentation was made at a Royal Navy ceremony and, on his behalf, we sincerely thank the Royal Navy staff involved for making it such a memorable occasion.”

After the war Alan, who was born in Pollokshields in 1914 and was educated at Kelvinside Academy, was one of the leading lights in establishing ‘The Carrick’ as the RNVR Club (Scotland) on the Broomielaw in Glasgow, buying the ship from the Admiralty for just £1.

He had strong connections with the west of Scotland involved in shipbuilding and engineering.  He was closely associated with the Royal Naval Sailing Association and was for a time its vice-commodore.

He later moved to England for work before retiring to Perthshire.