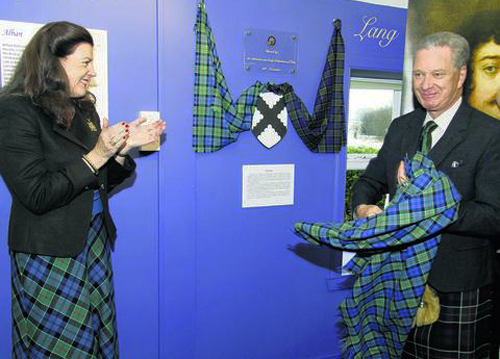 The Clan Colquhoun Heritage and Visitor Centre was officially opened in December by Sir Malcolm and Lady Colquhoun.

It is in Shore Cottage, the oldest cottage in the village, thought to date back to the 17th century, near to Luss Church and overlooking Loch Lomond.

The centre has exhibits designed to interest all age groups, telling the intertwined history of Luss, the Colquhouns, and neighbouring clans.

Clan historian and curator James Pearson said: “It is hoped that the centre will provide visitors with an insight into what makes Luss, Loch Lomond, and Scotland unique.

“It will also provide those with clan connections the opportunity to learn about their history.”

Sir Malcolm Colquhoun, the 9th Baronet of Luss and chairman of Luss Estates, said: “The new museum greatly adds to the visitor attractions in what is surely one of the loveliest and most visited places in Scotland, and I welcome that.

“The history of the clans and the history of Scotland are so closely intertwined as to be indistinguishable, and our aim is to increase visitors’ awareness of that and of its relevance, not just to the past but to the future as well.”

Villagers are planning a number of events in addition to Luss Highland Games in 2015.

They will include a re-enactment and living history group depicting 17th century Highland raids in April, and the Moor and Loch Pony Show in the autumn.

The museum is open during weekends over winter, although viewings can be arranged by calling 01436-860874. It will be open daily from 10am–5pm during the summer months.