THE SON of a famous Rhu artist earned fame of a very different kind.

Tom Guthrie was the son of Sir James Guthrie, but he did not inherit his father’s artistic talent. Instead he was an expert pilot and a pioneer of seaplane passenger excursions.

James Guthrie was the leader of the renowned Glasgow Boys group of artists, and his wife was Helen Newton Whitelaw. They lived at her family home, Rowmore, in the village.

They married in 1897 when he was 38 and she was a year younger, and lived for most of the year in the Rhu mansion although they also had a home in Edinburgh.

Two years after the marriage their only son, Thomas Whitelaw Boyd Guthrie, was born in Chelsea, London.

More can be learned about Tom from Charles Warr's autobiography, entitled ‘The Glimmering Landscape’ and published in 1960.

Warr was the son of the Rev Alfred Warr, Church of Scotland minister at Rosneath from 1887.

After the death of the minister in 1916, his family took up temporary residence at Glenarn, Rhu, and Charles was able to develop further an already close friendship with near neighbours Sir James and Lady Guthrie.

This is how he describes their son: “Tom, of whom I was very fond, was completely inartistic.

“His sole interest in life lay in engineering, and in the engine-room of his father's large and commodious motor-yacht, which lay moored on the waters below Rowmore.

“However Sir James dreamed of other things for Tom, and sent him to Oxford.”

Tom resolutely refused to apply himself to his studies, until finally he and his father came to a compromise — if Tom completed his course at Oxford, he could then take up engineering on the Clyde.

The deal worked. Tom successfully completed his course, and gained a B.Sc.

He had a further breakthrough in meeting Professor Jenkins of the School of Engineering at Oxford, who was able to discuss the subjects that really mattered to Tom.

Sir James was not totally happy and told his friend: “I do wish Tom could find something that was less entirely practical than the course he has in view.”

However Tom pursued what he saw as his true calling, and became a naval architect and engineer.

After his father’s death on September 6 1930, Tom took up flying and trained in a Tiger Moth 60, receiving the Great Britain Royal Aero Club Aviators Certificate in 1932 and being registered with the Scottish Flying Club.

The following year he became a pioneering seaplane operator when he set up Clyde Flying Boats Ltd.

There was a small hanger and slipway down from Rowmore, where in his later years Sir James — to the delight of village youngsters — kept a seaplane.

Here Tom’s seaplane was based, with flights on offer from Helensburgh beach.

An article in the Helensburgh and Gareloch Times of July 5 1933 describes his flying endeavours, stating that he had brought to the towns of Scotland “a most wonderful flying machine — the Cutty Sark”, which was a Saunders Roe flying boat. 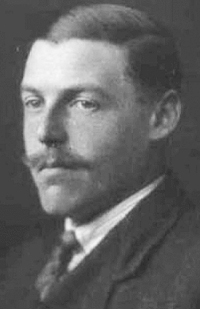 It was the very latest in aircraft construction, and 100mph flights over the Firth of Clyde were not to be missed and could be arranged with Mr Kennedy, Manager, Clyde Flying Boats, or with Mr Guthrie at Rowmore.

The following August, the newspaper carried an advert for Clyde Flying Boats.

A visit to the Lochaber Games at Fort William from Helensburgh beach was on offer. Passengers would set off at 11am on Monday August 28, arriving at Fort William at 12.30pm.

Seats were available for two passengers at a cost of £3 5 shillings for a single journey.

It was also announced that the Cloud of Iona or the Cutty Sark would be at Fort William on August 28-29, and at Portree on August 30-31. Enquiries were to be directed to MacDougalls, the Tobacconists, West Clyde Street, or MacNeur and Bryden Ltd. in East Princes Street, or by phoning Rhu 76.

A picture of an aircraft on the Helensburgh foreshore just west of the pier appeared in the Advertiser of April 13 2000, with a plea for information from readers.

This prompted a letter the following week from Ian Nicolson of Cove, who identified the plane as a SARO Cutty Sark, the first of which was built in 1929.

Ian's father had been managing director at Saunders Roe, the manufacturers.

His great-grandfather had been involved with the construction of the famous ship of that name at Scott and Linton's yard — but completed by Denny's in Dumbarton after the other firm went bust — hence the choice of name for the aircraft.

Only twelve of this type of plane, which could carry two passengers, were built. It had a top speed of 107 mph and a range of 315 miles, and could land on both solid ground and water.

She said that he began with a Tiger Moth before buying the larger SARO Cutty Sark. The pilot was Captain Arthur and the mechanic Vernon Whittaker.

The plane was kept at Inchmurrin island on Loch Lomond, and the young Duncan McAdam drove them across to Loch Lomond every morning and back in the evening in a sports car they called ‘The Lollipop’.

The Duke of Montrose chartered the aircraft for his meetings with the Prince of Wales at Rothesay.

Doris recalls: “I was very young at the time, but the events are still clear. It was such a novelty to see the plane, which was near enough to touch, although I was never brave enough to do so.

“There were always children around the plane.  It was a ‘must’ every day — my sister took me to the esplanade at the pier to view this amazing event.
“I can still remember the intense excitement of willing the plane to land. It was always a worry that it would not, as it seemed such a clumsy thing lumbering in.

“Then the tension of willing it to take off — it seemed to take ages to get wobbly airborne.

“My late husband Jim remembered the crew as dashing young men driving around in Tom’s sport car with an open top and scarves flying. They were heroes to the young lads like him.”

She added that, to her great disappointment and that of other children, the plane did not appear the following year, the whole venture being sadly deemed not a commercial success.

Tom was also well known in yachting circles and took a practical interest in the Schools and Universities Races held in the Gareloch in August 1938, and in Clyde yachting generally.

For many years he was captain of the Boys Brigade company in Rhu.

He died of kidney failure on February 21 1938 in his 39th year. The previous year he appeared to make an excellent recovery from a serious illness, but it returned.

According to his death certificate, which was signed by his uncle, Helensburgh GP Dr William Robert Sewell, he had been ill for two days.

The funeral service was held in Rowmore, and the interment followed at Rhu Churchyard.