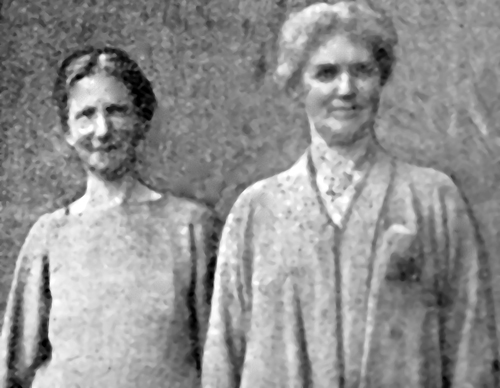 ONE of the most tragic tales of Helensburgh’s past is that of the accident which killed two town matrons.

It happened on October 6 1925, and was reported in the Glasgow Herald the following day under the headline ‘Two Ladies Killed — Run down by motor car in Helensburgh”.

“It appears that Miss Chapman and Miss Milne were proceeding along East Clyde Street, in the vicinity of the Queen’s Hotel, when a passing motor car, which was being driven by a local lady in the direction of Craigendoran, struck them, causing them to be thrown violently to the ground.

“It is thought that the accident happened through the car skidding on the tarmacadam road.

“Prompt assistance was rendered in securing their speedy removal to the Victoria Infirmary, but Miss Milne died an hour after admission, and Miss Chapman, after lying in a critical condition for some time, succumbed to their injuries during the afternoon.”

The Helensburgh and Gareloch Times the same day had more detail as it reported on an event which “cast quite a gloom throughout the town where both ladies were so well known.”

Miss Chapman and Miss Milne had been shopping and were returning when, near to Barncroft in East Clyde Street, they were overtaken and knocked down by a car driven by Mrs Patrick Cuthbert, of Fulwood, who was travelling towards Craigendoran.

When near to the two matrons, who were walking on the side of the road, the car skidded and knocked them to the ground.

Two local GPs, Dr Sandison and Dr J.Ewing Hunter, were quickly on the scene and tended to the ladies who were clearly seriously injured, and they were taken to the Infirmary.

Just at the time of the accident a large car stopped on the road and the chauffeur was asked if his car might be used to take Miss Chapman to the Infirmary.

The chauffeur asked the occupants of the car for instructions, but they replied that the car was full.

Miss Milne, daughter of the late David Milne, was a native of Kirriemuir, Forfarshire, and came to Helensburgh as a charge nurse. She was appointed matron of the Fever Hospital and Sanatorium in March 1917, in which institution, the Times said, she had discharged her duties with great fidelity.

Miss Chapman, who belonged to Fyvie, Aberdeenshire, was appointed matron of the Infirmary in 1915, and, the Times said, during her years of service had brought that institution up to a high standard.

“Her unwearying attention to the patients and her kindness and courtesy to the visitors made her a great favourite with all,” the report concluded.

“The sad event aroused deep and widespread sorrow and sympathy for the bereaved relatives.”

The two ladies were buried together in Helensburgh Cemetery within sight of the two hospitals.

A combined monument in their memory was “erected by a grateful community”.

Miss Milne came to the town when her close friend Miss Osborne was appointed matron of the Infectious Diseases Hospital — relinquishing a good post with better pay and prospects to accompany her friend — and then succeeded her.

In his book ‘Reminiscences and Reflections’ published in 1949, Dr A.Gordon Ingram said of her: “As a nurse, Miss Milne possessed consummate skill, especially in her post-operative treatment of diptheria in children who had to have the operation of tracheotomy performed where suffociation was impending.

“Miss Milne as a matron took a high place, and her devotion to children was something always to be remembered.” 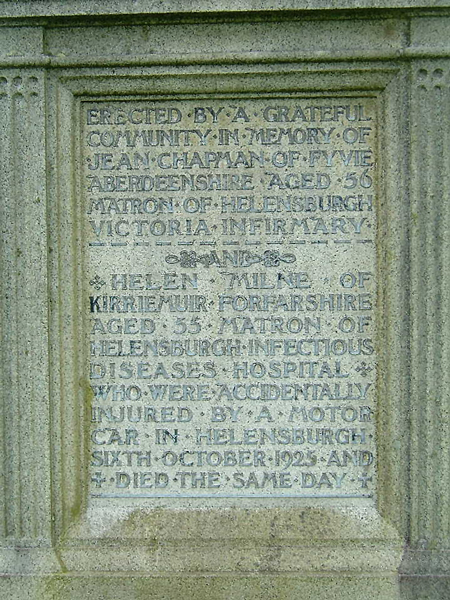 Similar sentiments came in the Times report of the funeral the following week.

It was thought first of all by the relatives of the deceased that it would be fitting to inter their remains at Fyvie and Kirriemuir.

But so strong was the feeling expressed by burgh inhabitants that they should be laid to rest together, within the shadows of the two institutions where they worked so faithfully, that this idea was abandoned, and they were laid side by side in the one grave in Helensburgh Cemetery.

Some time before the funeral service the polished oak coffins were borne to St Columba Church and placed in front of the pulpit, a member of the local fire brigade on guard on either side.

Not for many years had such a large congregation assembled in this church, which was full downstairs with just a few vacant seats in the gallery.

Men, women and children filled the pews to pay their final tribute to the memories of two who in an unobtrusive way had gained a mastery over their hearts.

Out of respect all places of public business were closed during the funeral, and flags were at half-mast on all public buildings.

The relatives of the deceased occupied the front seats, those behind being allocated to the Town Council, the Parish Council, the Infirmary directors, medical practitioners, nursing staff of both Infirmary and Hospital, and Burgh.

Helensburgh ministers, together with the Rev T.E.Jubb of Luss, the Rev W.E.Ireland of Garelochhead, and the Rev Hugh Miller of Shandon, occupied the choir seats.

The Rev J.W.Walker and the Rev A.D.Barr conducted the service.

Mr Barr engaged in prayer, in which he gave thanks for the noble work that had been accomplished by the departed and for the example which they had left to those who follow on.

He also expressed the sympathy that went out from the community to the relatives.

Mr Walker paid tribute to the two ladies in his eulogy.

He said: “Our town has been stirred to its very depths by this tragic occurrence. In a moment, in the twinkling of an eye, these two gifted and much loved women passed into a state of unconsciousness, upon which death rapidly supervened.

“One moment they were talking cheerily, making plans for the coming days, and then, suddenly, all was over, so far as this life was concerned.

“It is a striking illustration of how uncertain our existence here is. It is a call to every one of us to have our loins girt and our lamps burning.

“It is difficult to think of Miss Chapman and Miss Milne apart from one another. They were so constantly together, making united shopping expeditions, enjoying delightful trips into the country together.

“And together they went on that last strange excursion that awaits us all. Their going away together robs their departure of something of its sadness, while it heightens its drama.

“It is impossible to speak too highly of the services the two of them rendered this community.

“Enquire of any who have been under their care at the Infirmary or the Hospital and you will receive a glowing testimonial to their kindness of heart, to their ability and their efficiency.

“Miss Chapman kept everything going sweetly at the Infirmary, staff and doctors working splendidly with her, the general atmosphere of goodwill being reflected in the cheerful faces of the patients.

“As for Miss Milne, mothers need not have had any misgivings about leaving their children in her hands.

“The difficulty was to get them to come away from the Hospital when they had finished their cure. And they dearly loved to visit again the Matron who had so completely won their affections.

“Helensburgh was fortunate in having, for a spell of years, two such ladies in charge of their two centres of healing.

“What a blessing hospitals are, but that blessing is multiplied when the hospitals are presided over by able and compassionate women.

“This Public Funeral Service sprang into being out of the heart of the community.

“It is a spontaneous expression of the whole community’s appreciation of Miss Chapman’s and Miss Milne’s quiet, unassuming but never-failing devotion to their great art of nursing.

“Christ was a Healer and our two departed friends each had a large portion of the Christ-spirit. Their work was for them a real vocation, a high calling.

“I had occasion to ring up Miss Chapman on the telephone last Monday. Just before ringing off I asked if they were busy and she replied that the wards were not very full.

“I then remarked ‘You never know when accidents may occur and when the wards may fill.’ ‘Indeed, you don’t,’ said Miss Chapman, and then with a goodbye, that was the last time I was to hear her voice.

“Our deepest sympathy goes out to all the sorrowing relatives and friends who have gathered from far and near to pay their dear ones this last tribute of respect and love.

“I think also I am voicing your feelings when I say that we deeply sympathise with her who was the innocent cause of this sad happening and who must be enduring agonies of mind and heart at this time.”

A procession led by relatives and dignitaries followed the hearses, escorted by firemen, and carriages laden with flowers, on a bright autumn day, passing crowds who had taken a break from work to pay their respects.

At the gates of Helensburgh Cemetery many women and children awaited the arrival of the procession.

A large number of people stood round the open grave, and the remains of the two ladies were committed to their last resting place. Mr Barr read the committal service, and Mr Walker said a prayer and pronounced the Benediction. Many then filed past the grave.

Later the relatives expressed their thanks to those who made the arrangements for the funeral and to all other friends for their kind enquiries and for the splendid and most touching tribute of affection and respect to the memories of Miss Chapman and Miss Milne.

Sympathetic references were made in the churches on Sunday after the accident to the heavy loss the community had sustained.

Three of the late Miss Milne’s friends from the Kilmarnock district returning from the funeral were in a serious motor collision on Kilmaurs Road, but fortunately escaped without any serious injury. The cars were badly smashed. 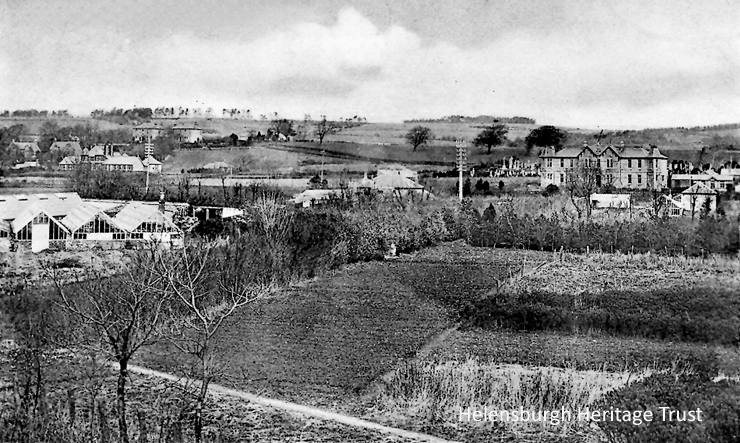