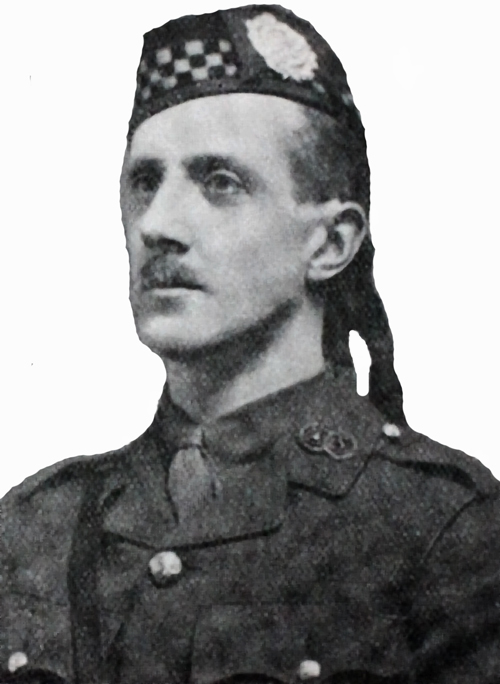 A MEMBER of a well-known Helensburgh family died unexpectedly in hospital after receiving gunshot wounds at Ypres in 1917.

The death of Captain William Hamilton Campbell Kidston, of the Argyll and Sutherland Highlanders in a military hospital was a painful surprise to his friends and the community generally, according to the local paper.

His father was chairman of A.G.Kidston & Co.Ltd., iron and steel merchants, but concentrated on the insurance broking side of the business and became a senior executive and later a director of the Royal Insurance Company.

He played rugby for Scotland against England in February 1874, was a keen bowler and curler, and was one of the founders of Helensburgh Golf Club, serving as captain from 1894-96 and president in 1928-29.

He had a particular interest in the Town Mission and the religious teaching of the young. He was a friend of the Plotholders Association and granted the use of a large field in front of his house for growing vegetables in plots.

His eldest son William was one of the first pupils of Miss Johnston when she began her school in Sunnyside, West Argyle Street. Afterwards he was educated at Larchfield School and Leys School in Cambridge.

After leaving school he travelled a little, and then spent a year on the continent learning French and German at first hand.

Next he began work in his father’s office, and served both in Glasgow and London. He subsequently became a partner in the firm and in that capacity made several trips abroad. Latterly he went to London, and became joint manager of the firm’s branch in the city.

In his spare time he served as an officer for some years in the Glasgow Engineers.

On the outbreak of the First World War he joined up at the earliest possible moment, starting first as a private in the Sportsman’s Battalion, before he gained a commission in the Reserve County Battalion.

In the rank of Lieutenant he went to France in 1915, joining the 9th Argylls, which at that point had temporarily amalgamated with the 7th Battalion, on June 20.

On July 22 the two Battalions resumed separate existences, with the now Captain Kidston becoming the commanding officer of the 9th Argylls until August 10 when Major W.J.B.Tweedie arrived to take over the command of the battalion.

After five months in the trenches Captain Kidston was invalided to hospital on October 27. On coming out of hospital he was made Camp Adjutant at Rouen, a position he held for fifteen months.

He always wanted to resume active service, and on returning to France after a furlough of two weeks in April 1917, he was gazetted to the 8th Battalion. He was with them when he was badly wounded at Ypres on July 31.

His wounds were serious, his right thigh being broken, and he was taken to the Red Cross Hospital at Le Touquet. At first his parents received comforting messages, but then word came through that his condition was dangerous.

They left for France to see him, but when at Charing Cross Station in London on August 8 they received the sad information that he had died that morning from gangrene in the wound.

Captain Kidston was in his 38th year and unmarried. Of a kind and genial disposition, he was a great favourite with the men of the county battalion, to whom he showed much kindness.

At the morning service in the West United Free Church the following Sunday, the Rev Stephen Band BA paid a moving tribute.

He said: “We mourn the loss of a gallant gentleman and soldier, a devoted son and brother, a man respected and loved by a wide circle of friends.

“The soul of honour, he hated pretence and unreality. He did justly, he loved mercy, he walked humbly with his God.

“At the call of duty he gave himself gladly, and he died as he had lived — unselfish and brave to the end.”

The Commanding Officer of the 9th Battalion wrote: “Whenever I asked for volunteers for service overseas he was always the first to do so. 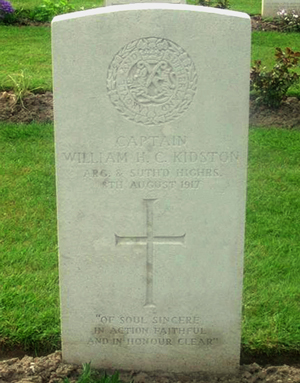 “He was a particularly keen and efficient officer, and a gallant gentleman, sincerely liked by all ranks and by no one more than by myself.”

The Lieutenant of his company in the 9th Battalion wrote: “He was my Company Commander, and was simply loved by us all, both officers and men.”

The Commanding Officer of the 8th Battalion wrote to his father: “Your son was one of the most conscientious officers I have had. Whatever he did, he did thoroughly.

“He and his company did wonderfully well in the attack. They had a most important part, and any failure on their part would have upset all the arrangements for the attack.

“It was a difficult attack, and to your son belongs the credit of having got it going exactly in accordance with the instructions, and thereby ensured a great success for the battalion.”

A brother officer added: “I know no one who displayed a more constant or consistent devotion to duty. I shall always retain the remembrance of a very gallant comrade in arms.”

One of four members of the Kidston family who served in World War One — of whom only one survived — he was buried in the Commonwealth War Cemetery at Etaples, near Boulogne.