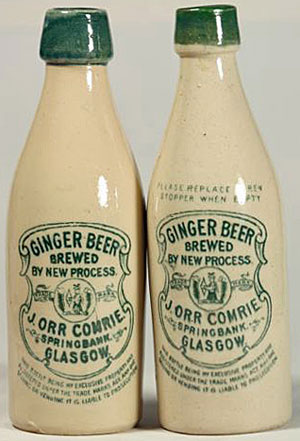 THREE brothers were the first people to engage in the large-scale manufacturing of aerated waters in Helensburgh.

The brothers Comrie from Glasgow had a strong family connection with the burgh as their father, Alexander, had been a Helensburgh-based builder from at least as far back as the 1860’s.

In 1860, he married Isabella Orr, and the young couple soon started to raise a family. The three sons of the marriage, Daniel Kirkwood, James Orr, and Alexander, turned out to be ambitious young men, and around 1887 they set up in business together.

Describing themselves as manufacturing chemists, they set up an aerated water factory in Glasgow at Garscube Road, operating under the name of J.Orr Comrie.

With this enterprise well established, they decided in 1892 to set up in a similar way in Helensburgh. Construction work proceeded at speed, their East King Street building being designed by the Glasgow-based firm of Burnet, Son, and Campbell.

The style was English half-timber. Although the plant had some complicated functional requirements, the architects still succeeded in providing a building (pictured below) that, while industrial in purpose, was stylish and full of character.

Aerated water businesses understandably tended to emphasise the unique qualities of the water that they used, and here they were able to state that their supply was obtained through boring of solid rock down to the great depth of 200 feet.

It was decided to market the products under the trade name of Fairy Springs. A nearby property on Lomond Street called Fairy Knowe — which became the Comrie family home for many years — probably inspired the choice of product name.

An article in the Helensburgh and Gareloch Times of July 26 1893 gave a detailed account of the construction and operation of the new factory.

The article revealed the very impressive nature of the enterprise, in both sheer scale and sophistication of design.

An idea of this can be gained from the manufacturing capability of the plant — up to 4,000 dozen bottles per day could be prepared and filled with the necessary products.

An advert from the time of the opening in 1893 declares that an impressive range of beverages could be obtained from the new factory.

The quality of the water used is emphasised as being much superior to that obtained from ‘gravitation water’, which could be equated with most public water supplies.

The company placed great stress on the fact that once pumped up from 200 feet, the water never had contact with the air until it entered the bottle.

All metal piping was of block tin, with no lead used at any point. The presumption was that water obtained from as deep a source as this would be almost guaranteed to be free of any  impurities. 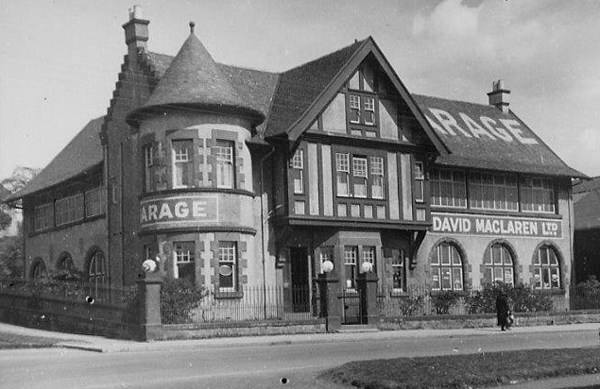 Bottles were proudly embossed with the name of the firm, which traded under the name of Comrie Brothers and Co., and bore the Fairy Springs trade mark.

The intention of the firm was to look primarily to the export market for business, and as they also operated from Glasgow there might economies of scale.

It is not known how the brothers divided their time between their two centres of operation. They also ran offices in Greenock, and all in all, the running of the businesses must have been quite complex.

A major change took place in 1903, when it was decided by mutual consent to dissolve both the Helensburgh company and the one in Glasgow, whereupon they would be re-constituted.

The Edinburgh Gazette revealed that the Helensburgh firm would continue under the name Comrie Brothers and Co, but would be run by only one of them, Daniel Kirkwood Comrie.

Similarly, the Glasgow business was to continue under its previous name, but would be the province of the two other brothers, James Orr and Alexander Comrie.

Around this time of change in the company, Daniel Kirkwood was being drawn into the world of public life.

Unlike his brothers, Daniel had continued to live in the family home at Fairy Knowe, and it does seem likely that he was always more involved with the Helensburgh business than the others.

The reorganisation may have been seen by him as a logical step. On the other hand, there could no longer be any sense of shared responsibility.

Any significant commitment to public life must have implied heavy reliance on capable and trustworthy staff to keep the complex operation at Fairy Springs running smoothly.

Daniel was elected as a member of Helensburgh Town Council, and by 1903 was serving as both a Bailie and convener of the standing committee on streets.

He continued in these roles until 1907, when his term as Bailie was over, but remained convener of the streets committee for some time before switching to the equivalent committee on water.

Equally appropriate was the gesture made by Daniel in 1904, when he presented a fine granite drinking fountain to the town. This was placed in the south-west corner of Colquhoun Square, matching a fountain at the diagonally opposite corner, gifted by Provost Sam Bryden.

The Comrie fountain remained in place until 1925, when, at the request of the family, it was moved to Hermitage Park.

Daniel was still serving as a town councillor in 1911, but within a year or two had not only stood down from the council, but had also ceased his involvement with the Fairy Springs factory.

He left the town, and settled down at Glenavon, a house beside the Gareloch at Clynder. He died there on December 14 1924 at the age of 63.

The firm of Comrie Brothers was now effectively at an end, ownership of the premises being vested in the firm of J.Orr Comrie. 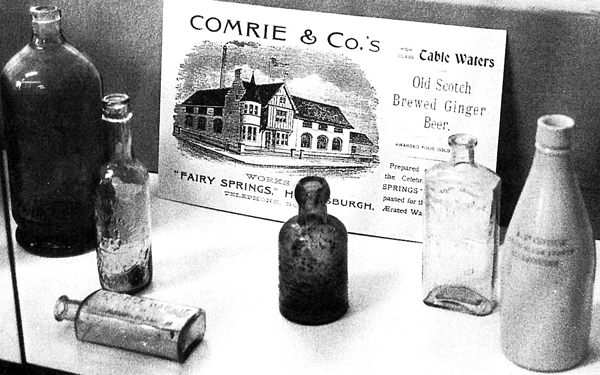 It is known that in 1915 the premises were occupied by the well-known firm of A.G.Barr and Co., and it seems likely that they continued production under the Fairy Springs label.

Evidence of this came through the finding of a bottle embossed in Fairy Springs manner, but with a stopper made by Barr’s.

The buildings fell empty, while still owned by J.Orr Comrie, but in 1919 they were bought over and occupied by the firm of David McLaren Ltd., who ran a garage business from the premises. It was the end of an era.

The former factory continued in use as a garage for many years, although with several changes of ownership. For a time, an antiques business was based there.

But the building had an unhappy end, being gutted by fire around 1982. Today the Fruin Court flats occupy the site.

The Glasgow-based firm of J.Orr Comrie had a much longer existence, lasting until 1945, after which it was re-constituted as J.Orr Comrie and Sons Ltd.

Simultaneously, the line of business was changed to that of confectionery manufacture. This new business continued until 1962, when it stopped trading, and it was wound up in 1969.