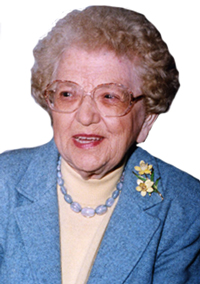 Pat, who lived at Drumgarve Cottages, West Argyle Street, passed away in the Vale of Leven Hospital, Alexandria, on Saturday February 6 at the age of 88.

Born in Glasgow, she was brought up in Helensburgh where she lived all her life. She was educated at Hermitage Primary School and Hermitage School and worked for Maclachlan Bakers, Macneur and Bryden Stationers, and for most of her working life, Carson Decorators.

A devoted member of St Columba Church, she edited the church magazine for some years.

She was fascinated by Helensburgh's history, and compiled several books of old pictures of the town and district, including in 2002, the burgh bicentenary year, ‘Trading Places’, which looked at local shops and trades past and present. She was a member of Helensburgh Writers Workshop.

For a time she wrote a local paper column, and also had articles published in well known Scottish magazines. In the months before her death she had been working on a new volume to be published by Argyll and Bute Council.

Her other great outside interest was dogs. She owned several over the years, and she both exhibited and judged at dog shows.

The funeral, conducted by the Rev David T.Young of Helensburgh Parish Church, was at Cardross Crematorium on Tuesday February 16 and was well attended.