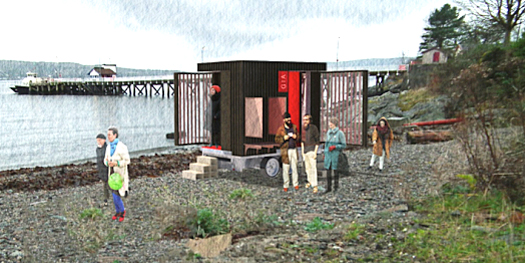 A CELEBRATION of architecture will come to Kilcreggan this month, helping to celebrate the area’s history.

A six-day programme of events will mark the 150th anniversary of the Burgh of Cove and Kilcreggan, which ceased to have its own Town Council in 1975 following a reform of local government.

The Glasgow Institute of Architecture is marking Scotland’s year of innovation, architecture and design with a touring pavilion which will visit four sites, including Kilcreggan, from Sunday March 20 to Friday March 25.

Organised by the Rosneath Peninsula West Community Development Trust, events at the pavilion will reach a climax on the Friday with a memorial lecture in tribute to distinguished Helensburgh architect Gareth Hoskins, who died earlier this year aged 48.

Events will be based around the GIA pavilion (pictured) in the centre of Kilcreggan village at the old surgery/Scottish Water site opposite the Creggans pub.

On Sunday March 20 at 2pm, MP Brendan O’Hara will perform the official launch of the Rosneath Peninsula Heritage Trails, followed by a talk on them by local author and historian Richard Reeve.

Incorporated into the Festival of Architecture is a celebration, organised by the Trust and Cove and Kilcreggan Community Council, of the burgh’s150th anniversary, which takes place at 3pm with a wine and finger buffet.

Many VIPs, including Mr O’Hara, MSP Jackie Baillie, representatives from Argyll and Bute Council, the Royal Navy, Babcock, and educational and media circles will be in attendance, and the reception is free and open to all members of the public. Free access is a feature of all the festival events.

Trust convener Murdo MacDonald said: “These events run alongside the Hinterland programme at Cardross, and as all the Kilcreggan activities are free and open to all members of the public, the Trust hopes the community will enjoy this celebration of the peninsula’s place in Scotland’s historic and contemporary architecture.”

• Rosneath Primary School’s senior pupils will have a talk on Monday 21st on the Rosneath Peninsula’s ‘Cave’ by Tam Ward. This is repeated for the Kilcreggan Primary children on Tuesday 22nd.

• On the evening of the 22nd at 6.30pm, architect Stuart Cameron will be presenting his company’s plans for ‘The New Architecture of Cove Park’.

• On Wednesday March 23 at 6.30pm, project leader Clare Simpson will be outlining ‘A Future Reclaimed: Kilmahew and St Peter’s Seminary, Cardross’ which is at the heart of the forthcoming Hinterland show.

• At 2pm on Thursday 24th and Friday 25th the Peninsula’s Arts and Crafts ‘makars’ will be displaying their wares round the pavilion until 4pm.

• On Thursday evening young people from the Cove and Kilcreggan Youth Cafe will have their night out.

The week concludes with a ‘Samosa Night’ at 6pm in the Creggans followed by a musical evening with ‘The Cooper’ at 9pm.