THE NEW Helensburgh Civic Centre incorporates a splendid state of the art Marriage Room which has already hosted its first wedding . . .

But the two-part building itself is also an excellent ‘marriage’ of old and new architecture which is already much admired.

It consists of the brilliantly refurbished former Clyde Street School and Clyde Community Education Centre at the east end, and a bright, modern new one stop shop for the Helensburgh and district staff of Argyll and Bute Council at the west end.

There is still some controversy over the £15,000 artwork of a lady on the north wall of the new build, and some problems of water penetration in the old building — barely surprising with the weather so far this year!

However and whenever these issues are resolved, it is a marvellous council and community asset.

Thomas McDougall, a Dunoon-based Argyll and Bute Council architect, is the man Helensburgh has to thank for turning an unlikely dream into a reality.

He was unable to be present at the official opening by burgh wheelchair tennis star Gordon Reid, but many compliments were paid to realisation of the imaginative concept.

Thomas said: “The council steers clear of highlighting the individual because it really is a collective effort to put these projects together, I think that’s right.

“Although I’m the architect who designed this project, I had great support from my colleagues in Property Service’s architectural team.

“It’s a very dedicated and modest group of people who don’t seek publicity — our reward is in our work and it’s something we’re very passionate about.

“I’ve worked in both private practice and local council and the one big difference between them is that the private architects seek publicity wherever possible for commercial gain, understandably so as their livelihood and business depends on a steady stream of commissions.

“Local authority architects on the other hand don’t have this burden.”

However he was willing to comment on what has been done.

The site was originally part of a lot of seafront land feued in 1795 by master manufacturer Robert Thomson, who built a mansion called Seabank.

It was to become the home of Andrew Bonar Law after his marriage in Helensburgh West Free Church on March 24 1891.

Advancing years induced Mr Thomson to dispose of a portion of the ground on the east side of his property, where Clyde Street School — was built.

In 1816, four years before his death, Mr Thomson sold Seabank, and it was later bought by the well known Kidston family from Glasgow who lived there until they built their own seafront mansion, Ferniegair. The house was demolished in the 1950s.

Next door from 1903 was Clyde Street School, a ‘B’ listed building designed by noted burgh architect and artist Alexander Nisbet Paterson, ARSA, FRIBA, RSW, who also designed the extension to the rear of the Municipal Buildings and the Cenotaph in Hermitage Park.

The primary school, later the Clyde CE Centre, was built in a Scottish Revival style with 17th century Renaissance details, with two lodges in the grounds

The council closed the building some years ago when the cost of repairs necessary because of dry rot and general neglect became too much. It was mothballed and steadily deteriorated.

In 2013 the current project was agreed, Graham Construction won the contract, and it was completed last year. Now 140 council staff work with the most wonderful view of the Clyde.

“We prepared the business case for this project in November 2007, so it’s been a long journey to get to the completed building — a challenging journey but a worthwhile one,” Thomas said.

“As with all public architecture the primary ambition for this project is to improve people’s lives, and the hope is to achieve that ambition.

“The main challenge in designing the new building was to link it to the listed building. The design of the new building respects the past, but also has its own character that looks forward to the future, creating a symbiosis between old and new.

“The success of this project will ultimately be measured over time by the people who use it, how it adds value to the local community, and how it brings local government closer to the people it serves.

“I think it is very important that the best examples of architecture are preserved,

“Alexander Nisbet. Paterson’s group of buildings making up the original Clyde Street School fall into this category, but for architecture to live it needs people and it needs a purpose.

“So one of the most rewarding parts of this project was giving this group of 100 year-old buildings a second life.”

From the outside the school building has a very heavy, almost austere, appearance, but this is softened by the ornament in the carvings and leadwork and the almost playful treatment of the roofs to the corner stair towers.

He said that inside the building in the central hall — remembered fondly by so many former pupils and community centre users — the quality of light was and is amazing.

“How can a building that appears so heavy and closed from the outside feel so light and open on the inside!” he said.

“The internal plan is deceptively simple but impressively effective. The surrounding rooms open into the double height central hall space which is crowned with a magnificent hammer beam roof.”

The school building points north towards the town, while the rooms within its walls point inwards to the central hall.

He said that the architecture of the new building needed to compliment the design of the school building to create a relationship and balance between old and new. Oak cladding was chosen as a complimentary material to the blonde sandstone. 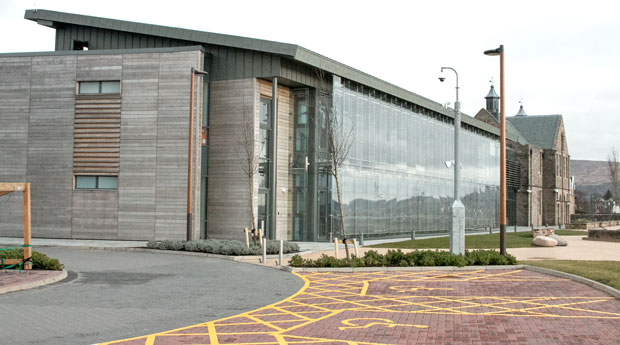 Rooflights bring natural daylight into the new building in the same way as they bring light into the school building, and both buildings are predominantly naturally ventilated.

The school and new build are visually very different, but they are designed on the same architectural principles.

“This approach allows a certain harmony and mutual respect to be created between these two distinctively different looking buildings,” he said.

Thomas added that the quality of leadwork round the two north stair towers and the two lead clad turrets was very impressive, and it was good to see that there are still people out there practicing this art form.

Throughout the project there was input from Helensburgh Heritage Trust and the Anderson and Templeton Trusts, as money ring-fenced from the sale of the old Templeton Library in John Street was used for work on the annex, which has now been named the Templeton Annex.

There are two rooms in the annex available for hire and exclusively for community use.

In the old school building, apart from the Marriage Room the Assembly Hall — which features displays by the Heritage Trust — can hold up to 100 people and there is a community room for 20 people. There is a cafe, and WiFi is available throughout.

The landscaped grounds are open for public use, and feature the famous old Boys and Girls gates which used to stand at the front.