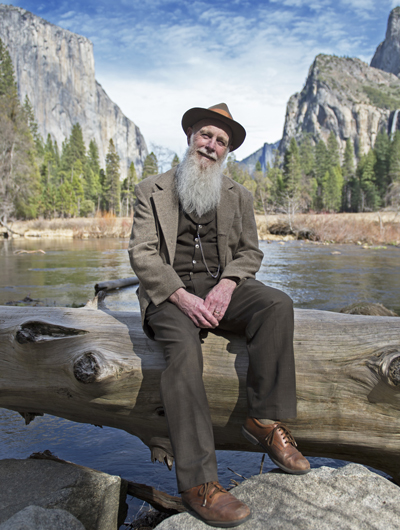 THE US National Parks Service Centennial Celebrations are being marked in Helensburgh and on Loch Lomondside.

As part of the celebrations, the Friends of Loch Lomond and the Trossachs, the independent conservation and heritage charity for Scotland’s first National Park, are coordinating a series of events involving US National Parks 'Centennial Ambassador', Lee Stetson (pictured).

Lee will be bringing ‘the spirit of John Muir’ back home to Scotland as he portrays the great man walking the new Scottish long distance route which bears his name between Helensburgh and Dunbar.

At special events later this month the Hollywood actor — perhaps better known for his part in the TV series ‘Hawaii Five-0’ — will be telling stories about John Muir, who is known as the father of the US National Parks movement.

These days Lee practically is John Muir, his memorable portrayals of the great man having been a highlight for hundreds of thousands of visitors to Yosemite National Park since 1983.

Yosemite was one of the first National Parks established in the United States over 100 years ago as a direct result of the extensive writings and lobbying by John Muir to protect this special place. It was also the start of a movement that led to the creation of over 409 parks in America’s National Park system which had a record 305 million visitors last year.

On Wednesday April 27, after addressing pupils at Hermitage Academy's morning assembly, Lee will start his walk at 10.30am at the pierhead in Helensburgh. Local walking and conservation enthusiasts will accompany Lee as he follows the John Muir Way over the hill to Balloch where he will be welcomed with a reception at the headquarters of Loch Lomond and The Trossachs National Park.

Lee will be able to say that he brings greetings from Yosemite, America's second national park, to Loch Lomond in Scotland's first national park.

He will open the John Muir Wildlife and Ecology Film Festival the following day in Helensburgh at 7pm, and on Saturday he will be planting Californian sequoia trees in Hermitage Park at 10.30am before going on to Balmaha on Loch Lomondside where he will open the Tom and Rhona Weir Mountain Garden at 2pm.

John Urquhart, vice-chairman of the Friends, said: “With the support of Argyll and Bute Council and the National Park, the Friends of Loch Lomond and The Trossachs are delighted to be hosting this series of events marking the US National Parks Centennial Celebrations and the great contribution of John Muir to the worldwide National Parks movement.

“Hopefully we will see a large turnout of the public at the events where there will be an opportunity to hear more stories about the adventures of John Muir and his outstanding achievements as a pioneering Scot in America all these years ago.”