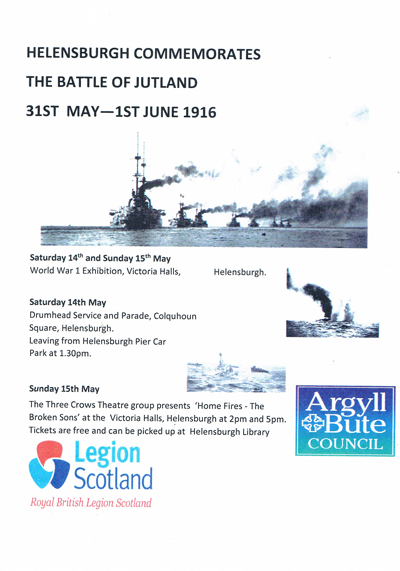 HELENSBURGH will commemorate the great World War One naval Battle of Jutland this weekend . . . a fortnight early.

The commemorations — a joint venture by the Royal British Legion Scotland and Argyll and Bute Council — begin on Saturday with a Parade leaving the pier car park at 1.30pm, followed by a Drumhead Service in Colquhoun Square.

On Sunday the Three Crows Theatre group will present ‘Home Fires — the Broken Sons’ at the Victoria Hall at 2pm and 5pm. Tickets are free and can be collected at Helensburgh Library in West King Street.

It features theatre, music and poetry bringing the war to life with tales from the Home Front and the stark contrast with the horrors of the trenches.

A World War One Exhibition will be held in the Victoria Hall on Saturday and Sunday.