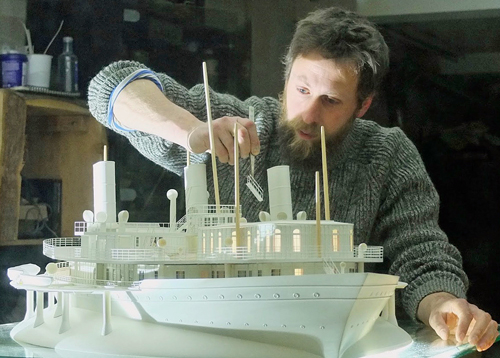 AN EXHIBITION celebrating the life and work of Helensburgh architect and artist William Leiper opened in Glasgow on Friday May 27 — the centenary of his death.

The Leiper Gallery at 117 West George Street is hosting the exhibition, entitled ‘Introduction to the Electric City’, until Sunday August 28 as a partner of the Festival of Architecture 2016.

Gallery director Ewan Kennedy said: “We will be using Leiper’s story to explore some aspects of life in late Victorian Glasgow, how the arrival of electricity transformed the face of the city with street lighting, tramcars and the ‘jolly red giants’ commercial towers built of steel frames and concrete with lifts behind highly decorated Gothic exteriors.”

Professor John Hume wrote: ““On a winter’s night, with electric lights twinkling in office and shop windows, intense arc lights in canyon-like streets and the clatter of a constant procession of electric trams central Glasgow became a magical, yet thoroughly modern city.

“Though architectural fashions have changed much of the brio, of the chutzpah, of the fizz of the heady period of the ‘Electric City’ is still there.”

In a long and varied career William Leiper designed one of almost everything, from his take on the Doge’s Palace looking out on Glasgow Green, to the world’s only Gothic lighthouse on Mull, some remarkable churches, a portfolio of stylish houses in Helensburgh and elsewhere.

The show will include images of many of these, also a model of Leiper’s Dumbarton Academy Building by courtesy of Keppie Design, who are currently building new West Dunbarton council offices around it.

A spectacular model of Tsar Alexander’s eccentric steam yacht Livadia, built on the Clyde in 1880, for which Leiper designed a fantastic interior, will be on show.

James Pierce, a talented young model maker, has created this as his own unique contribution to the Festival, and is pictured.

Glasgow-born Leiper lived in Helensburgh from 1876 until his death in 1916.

A number of other houses can claim to be part-Leiper, as he designed extensions, attics, laundries, stores, stables and gate houses for them.