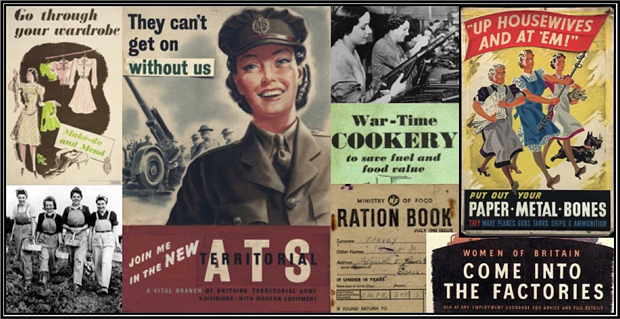 HELP is wanted from Helensburgh and district people for a major project researching the role of local women in World War Two.

During this period in history, women’s roles changed from one of dedicated domesticity and working in ‘women’s jobs’, to one which saw many women take on the integrated roles of mother, father, breadwinner and keeping house, within the constraints of wartime rationing and the restrictions of ‘making do and mending’.

As breadwinners, they were often called upon to take on jobs traditionally occupied by men — munitions workers, electricians, crane drivers, machine operators, Air Raid Wardens, etc and this justifiably reserved women a new respect and something of a ‘force to be reckoned with’.

The group can now achieve its purpose to ensure that these wider life-changing experiences of local women during the Second World War will be recognised, documented, championed, preserved and shared with the local community before they are lost.

The group aims to produce two publications, one filled with women’s testimonies, anecdotes, memoirs, photographs etc. to highlight the numerous and changing roles women experienced throughout the war.

The other is a Wartime Family Recipe book filled with local takes on ration recipes compared with modern day non-ration versions.

Additionally, they will source women’s wartime domestic clothing, work-wear, uniforms, home-wares, photographs, ration/clothing books etc. and they will showcase these at an end-of-Project VE Day themed Celebration event in the Grand Ballroom of Clydebank Town Hall to be attended by all generations from throughout the community.

This will see wartime food, music and live storytelling alongside an exhibition showcasing donated artefacts together with the publications as well as hosting ‘make do and mend’ and ration recipe, and 40's hair and make-up workshops.

A serious of open exhibition times at various venues across the area for the local community will follow to enable wider access and appreciation of the project outcomes championing our local women.

To ensure that these life-changing experiences of local women during the Second World War are recognised, documented, championed, preserved and shared with the local community for generations to come and before they are lost, the group is appealing to all women throughout West Dunbartonshire and the Helensburgh district to take part in the project, if at all appropriate for them.

Participation could be providing orally recorded or written histories of their own and/or their female family members — Mothers, Grans, Aunts — and/or donation or loan of associated artefacts.

Group members would be delighted to visit community groups and associations with a presentation covering the project and a chronological description highlighting War time events that changed women's life roles.

They would also bring a selection of already donated artefacts to encourage reminiscence and sharing of stories.

This documents the social life circumstances of local women during the 1950s & 60s, and two wonderful community resources were produced

The Memory Box and a colourful A5 booklet have been well received in the local community with several Memory Box Sessions having been conducted with groups of older generations as a reminiscence tool.

Progress is now being made with school and youth groups to conduct more educational type sessions with these resources.

Further information on this project can be reached via the Online Virtual Memory Box resource at http://womenslibrary.org.uk/discover-our-projects/wmh-west-dunbartonshire/.

Anyone interested in the new project should contact Lorna Stevenson, the Project Tutor and Support Worker, on This email address is being protected from spambots. You need JavaScript enabled to view it..