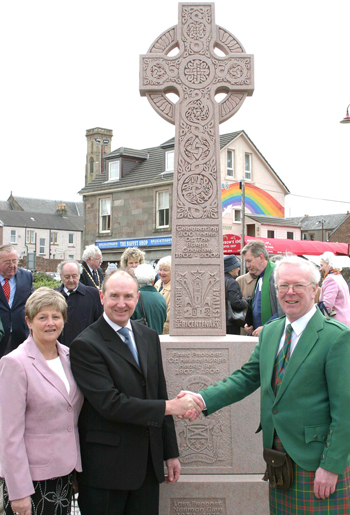 A CELTIC Cross, marking Helensburgh's Bicentenary, was unveiled in Colquhoun Square in 2005.

Created by Ronnie Paton of J.Paton Monumental Sculptors, Alexandria, it had been first suggested in 2002 as part of the bicentenary celebrations, but it took three years to raise the necessary funds by public subscription. 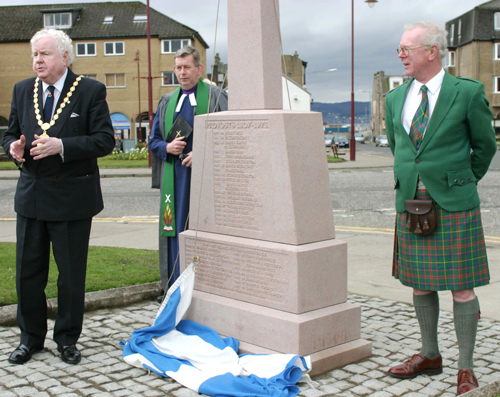 The original centenary cross on the opposite quadrant of the square had been gifted by Sir James Colquhoun of Luss as part of the centenary celebrations, and it was felt appropriate by Helensburgh Heritage Trust to mark the 200 years since the town received its burgh Charter in a similar way.

Stewart Noble, chairman of the Trust, unveiled the Cross in front of an invited audience of members, and interested members of the public.

A short act of dedication was conducted by the Rev David Clark, minister of the West Kirk.

Councillor Billy Petrie, convener of Argyll and Bute Council to whom ownership of the cross has been passed, spoke on behalf of the Council, and then presided over a civic reception in the West Kirk Hall.

The cross lists all the Provosts who served the Burgh — from Henry Bell to Norman M.Glen C.B.E. Around 70 people attended the ceremony.

Stewart Noble is pictured (above right) shaking hands with Ronnie Paton in front of the cross, and (lower right) with Provost Billy Petrie — addressing a good attendance of members and guests — and the Rev. David Clark.