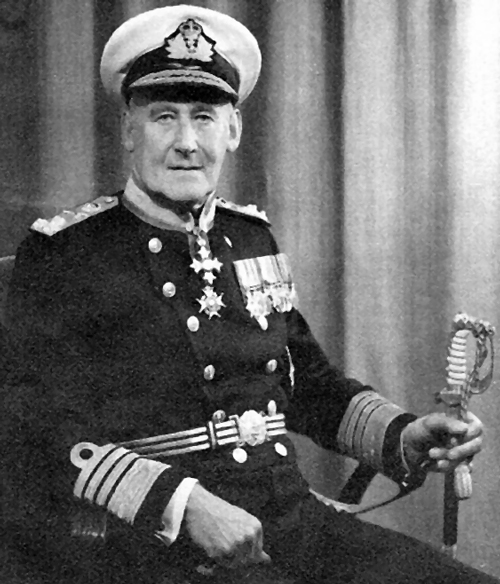 ONE of the most colourful Lords Lieutenant of Dunbartonshire was a senior naval officer who had a highly successful career at sea and on land.

Locally the former Flag Officer Scotland, who lived at Ardoch between Cardross and Dumbarton, was best known as an energetic Lord Lieutenant from 1955-68, during which time he was in charge of two royal visits to Helensburgh.

Born in Chelsea, London, he was the second child and only son of Commander Charles Elphinstone-Fleming Cunninghame Graham, MVO, and Mildred Emily Barbara, daughter of Charles Walter Bagot, Rector of Castle Rising, Norfolk.

Princess Louise, Duchess of Fife and later the Princess Royal, was his godmother, and Albert Edward, Prince of Wales and later Edward VII, was his godfather.

At King Edward’s Coronation he was page to the Duke of Fife and was awarded the 1902 Coronation Medal.

Educated at Ascham St Vincent’s School at Eastbourne, he joined the Royal Navy in 1905 when he entered Royal Naval College Osborne on the Isle of Wight.

He impressed his tutors, and in 1907 he progressed to Britannia Royal Naval College Dartmouth where he continued to earn good grades in every subject except in engineering.

He completed his cadet training on the armoured cruiser HMS Cumberland and passed out as a midshipman in 1910.

One of his first postings was to another armoured cruiser, HMS Cochrane, which was one of the ships that escorted King George V and Queen Mary to the Delhi Durbar of December 1911.

This was a mass assembly at Coronation Park in Delhi, to proclaim the succession of the couple as Emperor and Empress of India.

Practically every ruling prince and nobleman in India, plus thousands of landed gentry and other VIPs, attended to pay obeisance to their sovereigns.

The following year he was promoted to Sub-lieutenant, and at the beginning of 1914 the royal connection continued when he was appointed to the Royal Yacht Victoria and Albert — on which his father had also served.

When World War One broke out, he was transferred to the dreadnought battleship HMS Agincourt and saw action at the Battle of Jutland commanding no.4 gun turret.

Last May Helensburgh hosted a major centenary commemoration of the famous naval battle in which a number of town and district men took part, with two of them losing their lives. 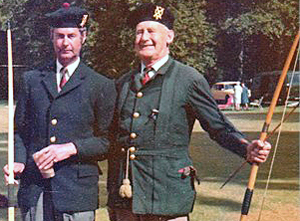 A signals specialist, Angus was promoted to Flag Lieutenant in 1917. After the war, he held a number of brief appointments, including a period as tutor at HM Signal School at Portsmouth

In 1922 he was appointed, despite his lowly rank, to another dreadnought battleship, HMS Iron Duke, in 1922 as Fleet Signal Officer of the Mediterranean Fleet under the command of Admiral Sir Osmond Brock.

He was promoted to Lieutenant-Commander in 1924 just before his marriage in October that year to Patricia Hanbury, sister-in-law of Herbert Fitzherbert, Iron Duke’s executive officer, and was made a Commander in 1928.

His choice of bride went down well with Don Roberto, who greatly approved of his young niece-in-law and particularly of her sense of adventure.

Next he had the unusual experience of attending all three staff colleges: Naval at Greenwich 1929-30; Army at Camberwell 1930-31; and Air Force at Andover 1934.

From 1931-34, he served as executive officer on the cruiser HMS Cardiff on the South Africa station. The following year he was appointed Staff Officer (Operations and Intelligence) at Nore Command at Chatham.

He had resigned himself, as had happened to his father, to remaining a Commander for the rest of his naval service, but he was promoted to Captain, at the last possible moment under the system then in force, on December 31 1935.

Next month, George V died and Angus, awaiting his first command, acted as Aide-de-camp to Prince Paul of Greece during his visit to London for the state funeral.

Later that year he was appointed to the gunboat HMS Tarantula as Senior Naval Officer on the West River in China during the Second Sino-Japanese War.

Because of their time there, his wife Patricia was able at first hand to recount to people in Britain the horrors of the Japanese invasion of Mancuria and China.

She would tell quietly and gently of exactly what had happened in those terrible years at the hands of the Japanese.

She would also say that as the wife of a naval officer she supported righteous wars, but that no one should think that they would be entitled to start unnecessary wars.

Decades later she was against the military action against Argentina in the Falklands on the grounds that it could have been avoided.

On his return from China, Angus was offered the post of Captain of the ‘stone frigate’ HMS President, near London’s Tower Bridge, which he declined, going on half-pay at his own request from April 14 1938 until March 2 1939, when he was appointed Captain of HM Signal School.

During World War Two he held four commands. When war was declared he was serving as Captain of HM Signal School, which also entailed being Deputy to the Commodore of Royal Naval Barracks, Portsmouth, and thus oversaw the research into the development of naval radio direction finders.

His next appointment, in 1941, was as Captain of the cruiser HMS Kent on the demanding Arctic convoys to Russia.

His ship was selected to carry a diplomatic party which included the Soviet Ambassador; the Rt Hon Anthony Eden, Secretary of State for Foreign Affairs; Sir Alexander Cadogan, Permanent Under-Secretary at the Foreign Office; and Lieutenant General Sir Archibald Nye, Vice-Chief of the Imperial General Staff, to Murmansk from where they would travel by train to Moscow for talks with Stalin.

As the diplomatic party were without any ciphering staff, it fell to Angus to inform the Foreign Secretary that the UK had declared war on Japan. 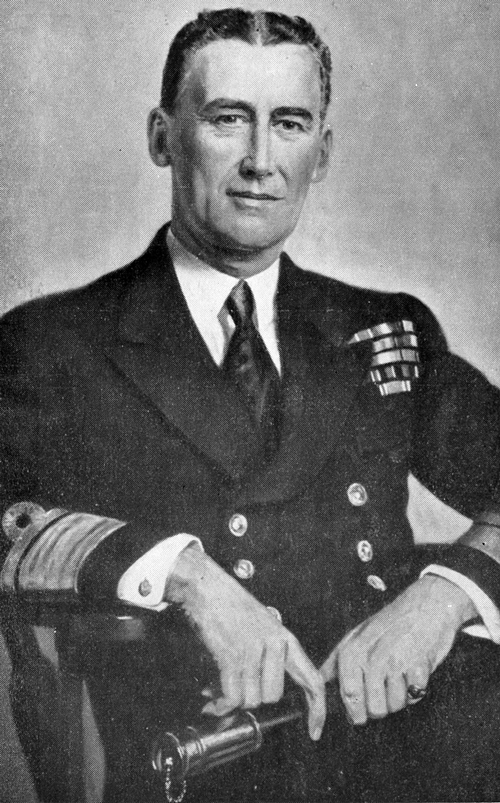 In the autumn of 1942, he became Flag-Captain to Rear-Admiral Louis Hamilton who had chosen to hoist his flag in HMS Kent.

A year later he was promoted to Commodore (2nd Class) in charge of the Royal Naval Barracks, Chatham, in command of 20,000 officers, men and women and with a daily turnover of 1,000.

Also during this time, he was an Aide-de-Camp to the King — his father had been a Groom-in-Waiting to Edward VII and an Equerry to George V — and was awarded a CBE in the 1944 New Year’s Honours List.

Finally in January 1944, there came a second promotion to Rear-Admiral in command of the 10th Cruiser Squadron and 2nd in Command of the Home Fleet.

After the war he continued to command the 10th Cruiser Squadron, later 2nd Cruiser Squadron, during which time he took part in the victory celebrations in the Netherlands and had the honour of having Princess Juliana and Prince Bernhardt as dinner guests.

He was also dispatched to Sweden on an official goodwill visit, being granted a private audience with King Gustav V.

In 1947 he became Admiral Superintendent at HM Dockyard, Rosyth, and became a CB. He was promoted to Vice Admiral a year later, and was appointed Flag Officer Scotland in 1950.

He was advanced to KBE in the 1951 New Year Honours and retired in October of that year, receiving his final promotion to Admiral on March 15 1952.

He was no less active in retirement at Ardoch, with 13 years as Lord Lieutenant of Dunbartonshire and 26 years as Keeper of Dumbarton Castle from 1955-81, the first naval officer to hold the post.

In 1985, his widow donated his uniform and medals to the castle where they are on public display. He also was a member of the Royal Company of Archers, achieving a final rank of Captain.

He donated his papers covering the years 1913–1980 to Churchill College, Cambridge, and his naval archive, covering the 18th, 19th & 20th centuries, to the University of California, Irvine.

He and his wife, the youngest daughter of banker Colonel Lionel Hanbury, CMG, VD, High Sheriff of the County of London in 1920-21, had one son, Robert Elphinstone, who followed his father into the Royal Navy; and one daughter, Jean, later Lady Polwarth. They had seven grandchildren.

Lady Cunninghame Graham, who had a reputation of being at ease in all circles, was involved in many good works, in particular the Royal Naval Lifeboat Institution, the Earl Haig Fund and the Queen Victoria School in Dunblane.

A great deal of her time was devoted to the National Trust for Scotland in a period when it was a small and intimate organisation.

She won golden opinions from those building up the properties of the National Trust at a time of great difficulty and few resources.

Sir Angus died in Vale of Leven Hospital on February 14 1981, two days before his 88th birthday, and his wife died in Melrose, Roxburghshire, on May 27 1998 at the age of 96. They and their son are buried at Inchmahome Priory, Lake of Menteith. 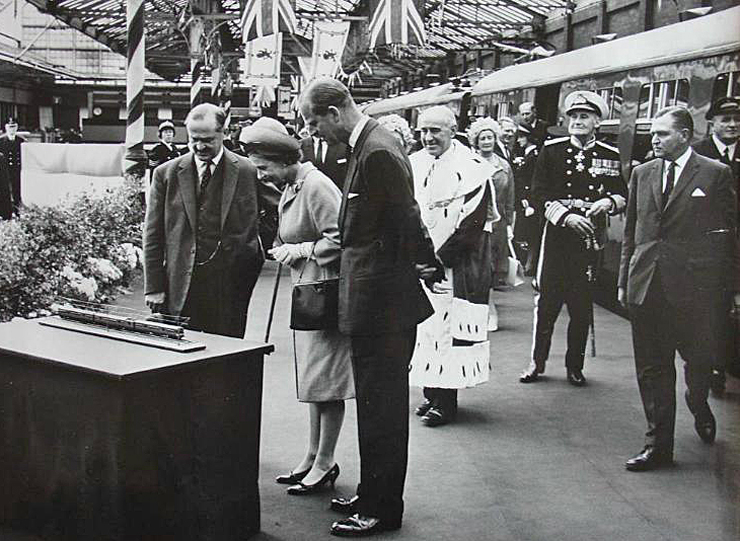