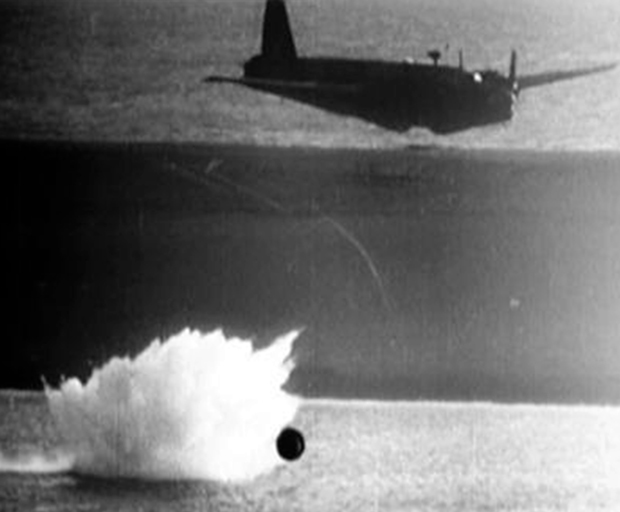 THE RAISING from Loch Striven of three Highball bombs — tested by the Rhu-based Marine Aircraft Experimental Establishment — hit the headlines in July 2017.

It happened around the time of the unveiling of a memorial stone at Kidston Park to commemorate the war time activities at RAF Helensburgh, home of the MAEE.

On July 19, the recovered Highball bombs broke the surface of Loch Striven, north of Rothesay.

They were among an estimated 200 of the Barnes Wallis-designed munitions tested on the loch before the famous Dam Busters raid in 1943 which inspired the much-loved 1955 film of the same name, in which the picture above was used.

The Highballs are the first examples of these famous Barnes Wallis bouncing bombs to be recovered in more than 70 years.

The recovery was conducted by Royal Navy clearance divers from the Faslane-based Northern Diving Group and sub aqua club divers.

MAEE was a flying boat base carrying out top secret trials of aircraft and anti-submarine warfare, and trying to find ways to sink the German battleship Tirpitz.

What is not generally known and still over-shadowed, following the raising of the Highballs, is that staff at RAF Helensburgh played a pivotal role in developing this revolutionary revolving bomb.

Retired Merseyside newspaper editor Robin Bird, whose late father Bob was the official photographer for the Highball tests, has a wad of once secret files and photographs relating to this — “too many for one article,” he said.

Highball was to be used to sink the battleship Tirpitz — described by Prime Minister Winston Churchill as a ‘terrible thing’ that must be sunk.

Tirpitz hid in a Norwegian fjord, and Loch Striven was used for the trials as it resembled a fjord. 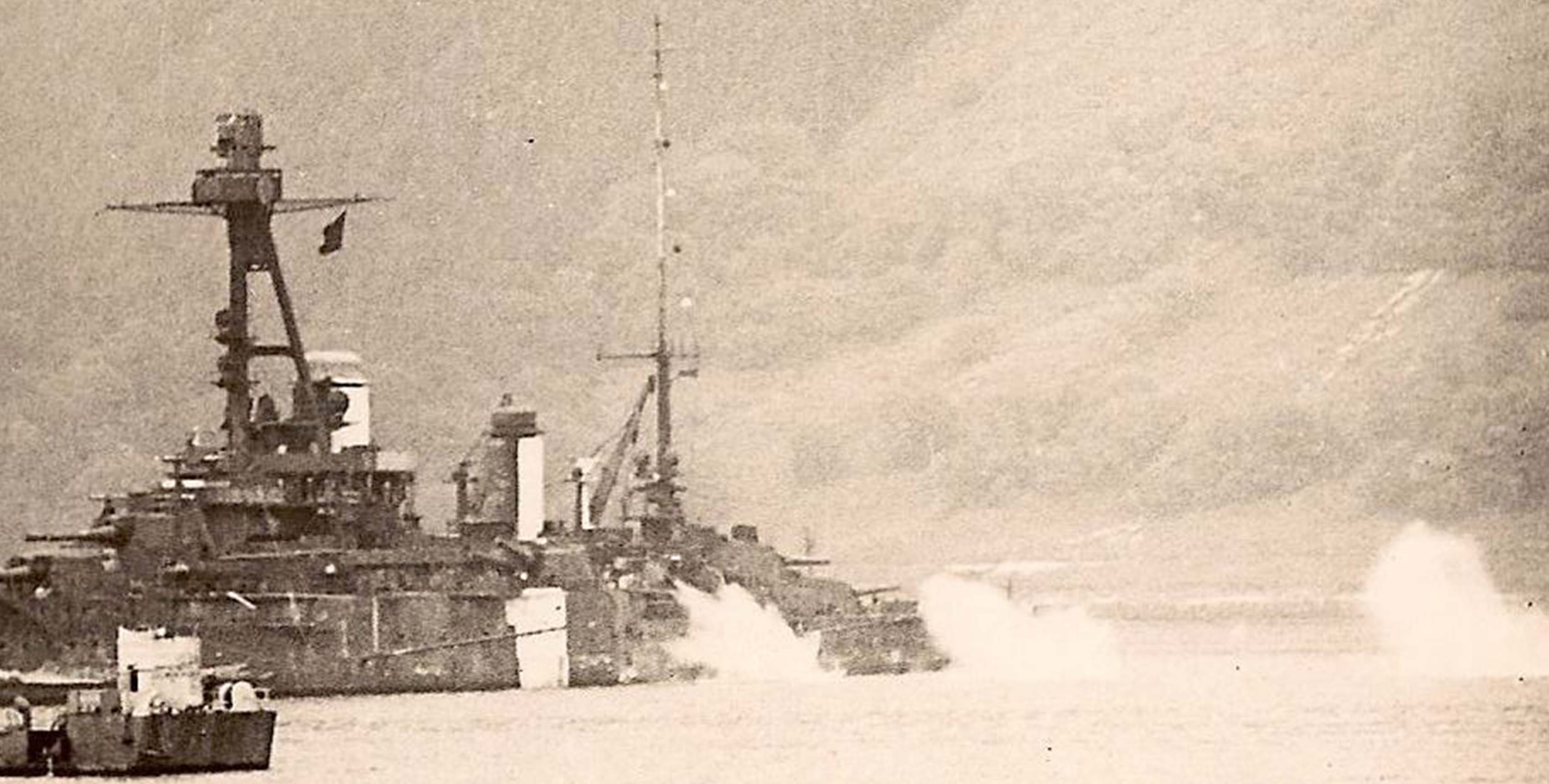 Two battleships were used as ‘targets’, both of a similar size to Tirpitz. One was the ex-French Admiral Courbet (seen above under attack), and later HMS Malaya (below).

Initial trials of Highball had taken place over Queen Mary Reservoir, north of Weybridge, before moving to Scotland under the control of RAF Helensburgh.

A specially adapted Wellington bomber BJ895 G (Guard at all times) flown by Squadron Leader ‘Shorty’ Longbottom of Messrs Vickers was used to drop the Highballs. 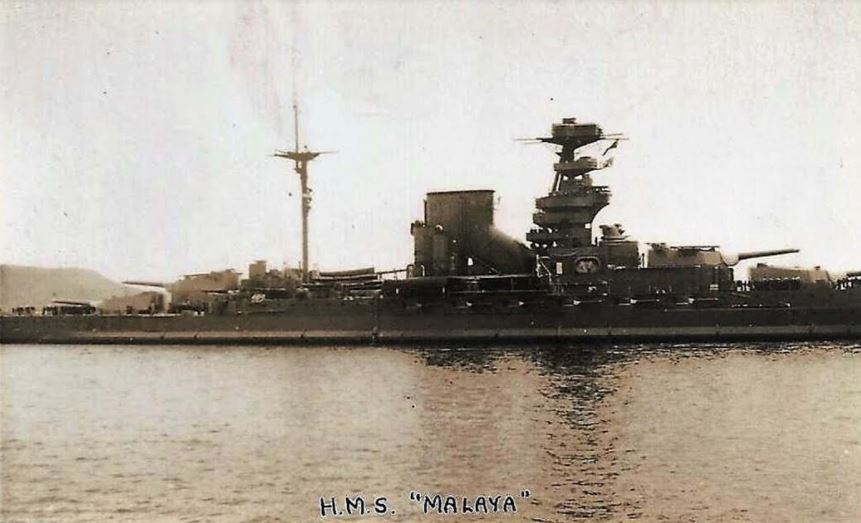 On completion of these early tests the Chester-built Wellington BJ895 reverted back to a standard bomber for use by the MAEE. A modified Mosquito DK 290/G was then used.

Shorty, who also flew a Highball-dropping Mosquito, died in a Vickers Warwick plane crash in January 1945.

MAEE at RAF Helensburgh was the host base for Highball trials in Scotland, and they used land-based aircraft from Prestwick and RAF Turnberry, north of Girvan, in Ayrshire.

The trials on Loch Striven were carried out at dare-devil speeds just above sea level.

MAEE conducted trials of both Highball and its big brother Upkeep on April 19, 20, and 21 1943, according to the National Archives at Kew, London.

Squadron Leader Longbottom flew in these trials, and the flight was controlled by MAEE which was also responsible for photography. 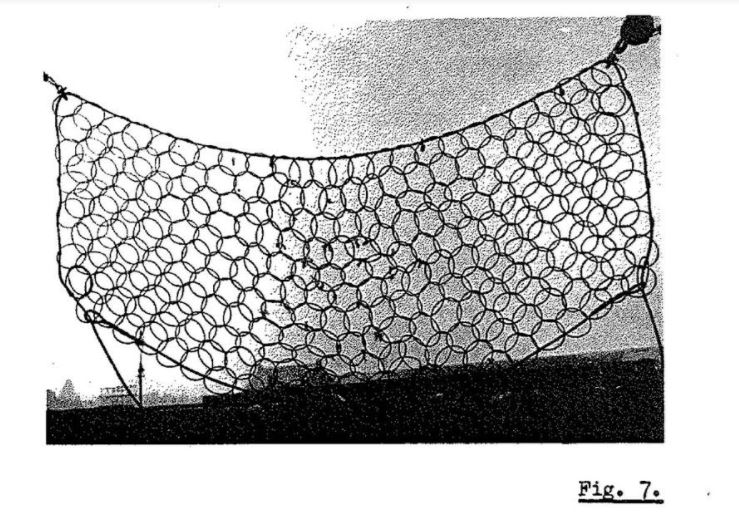 MAEE also used the laminated dummy Highballs to test the effectiveness of nets used to protected Tirpitz. The Loch Striven nets (one is pictured right) were laid by the Director of Boom Defence, Admiralty.

Film of the Highball trials was rushed to MAEE HQ at Rosslea, Rhu, to be examined and analysed by MAEE Scientific Assistant Frances McLaren, a Clydebank girl billeted at Rhu, who recalls that she had an RAF armed guard outside her door at the time.

A race developed in the testing of Highball and Upkeep, the latter being ready for the famous raid on the Dams carried out by Lancaster bombers under the command of Guy Gibson.

Tirpitz was eventually sunk by Lancaster bombers armed with Tallboys on November 12 1944.

Robin said after returning from a cruise to Norway to get a feel for the fjords that protected Tirpitz that he was amazed by the depth of the waters. Despite a fjord being comparatively narrow with high sides it could accommodate three cruise ships at one time the size of the Queen Mary.

One can only imagine how daring that Highball attack on the Tirpitz using Mosquitoes would have been.

As it turned out, the Highball bomb was never used in anger.

Dr Murray, author of 'Bouncing-Bomb Man: The Science of Sir Barnes Wallis', has spent the last decade trying to find a way of raising the bombs from the loch.

He enlisted the help of Mark Paisley, the British Sub-Aqua Club’s north west regional coach, in surveying the loch to track down the bombs. They were eventually located in 35m and 55m of water.

Although the munitions were used for test purposes and are thought not to contain explosives, the Northern Diving Group experts were enlisted to dive to the bombs to check them, give the all clear, and then raise them to the surface.

After attaching specialist lifting equipment to the heavy metal Highballs, the Faslane team winched them out of the water and on to their workboat the ‘Cato’.

They were moved to shore for transport in wet tanks containing a special salt-water solution to prevent them from corroding.

“We were very happy to participate as part of our Maritime Explosive Ordnance Disposal capability. We welcomed the opportunity to provide our mine-lifting and recovery expertise to preserve this piece of history.”

The project was important as there are no examples on public display. They will eventually be housed in the Brooklands Museum in Surrey and the De Havilland Aircraft Museum in Hertfordshire in time for the 75th anniversary of the Dam Busters raid in 2018.

Chief Petty Officer Gareth Spence, who led the descent to recover the bombs, said: “It was a privilege to be part of this dive.

“Not only was it a useful training exercise, but it also gave us a tremendous sense of satisfaction knowing that we have played a part in helping to preserve these important pieces of our wartime history.”

Dr Murray added: “To be here at Loch Striven to see the Highballs finally being pulled out of the water has been fantastic.

"It’s been a long-term ambition of mine, knowing they were here, to have them recovered for people to be able to see them.

“The bouncing bomb is probably the most legendary weapon in the British military arsenal and this particular example, the Highball, is the only one we don’t have on display to the public.”