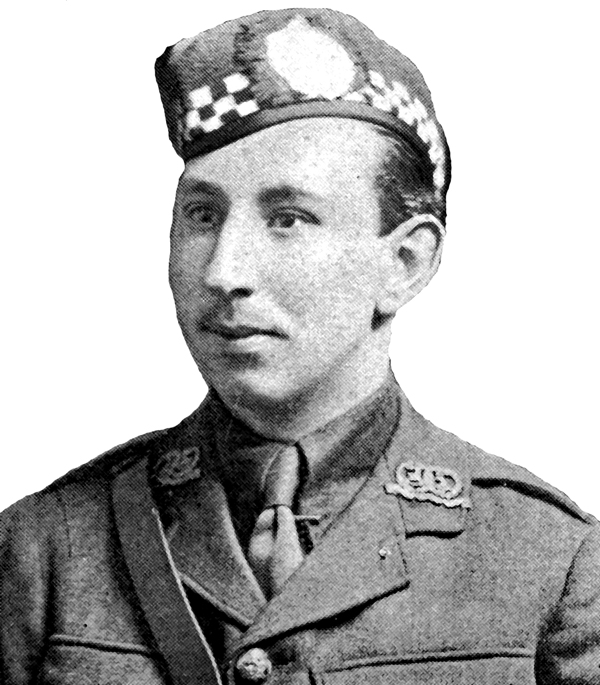 A HELENSBURGH man was a World War One flying ace with six aerial victories before his death in action.

Although born in Grangemouth on October 15 1892, Captain David Sidney Hall MC was the son of Helensburgh master grocer and later laundry proprietor William Hall and his wife Annie, nee Fleming, who married at Whiteinch on July 16 1880 and lived at Birkfell, 30 Charlotte Street.

David was educated at Hermitage School, Dunoon Grammar School, and Hillhead High School, Glasgow, after which he worked in the office of chartered accountants Paterson & Benzie.

In October 1914 he enlisted into the 17th (Glasgow Commercials) Battalion, Highland Light Infantry, as a private.

On April 17 1915 he was commissioned as a 2nd Lieutenant in the 9th (Dumbartonshire) Battalion of the Princess Louise's Argyll and Sutherland Highlanders regiment, and he was sent to France in July.

He was seconded to the Royal Flying Corps with the rank of Lieutenant on December 1 1916.

After completing his pilot training he was posted to No.57 Squadron in France, flying the De Havilland 4 two-seater biplane day bomber.

The only British plane designed by the Americans, it earned itself the macabre nickname of ‘the flying coffin’ because its fuel tank was situated between the pilot and the observer.

However it was the first British two-seat light day-bomber to have an effective defensive armament.

It first flew in August 1916 and entered service with the Royal Flying Corps on March 6 1917 with No.55 Squadron in France.

The majority of DH.4s were built as general purpose two-seaters in the United States, for service with the American forces in France.

The aircraft was a conventional tractor two bay biplane of all-wooden construction. The crew of two were accommodated in widely spaced cockpits, separated by the fuel tank.

There was controversy, especially amongst Americans, that this placing of the fuel tank was inherently unsafe. In fact, most contemporary aircraft were prone to catching fire in the air.

The fire hazard was reduced, however, when the pressurised fuel system was replaced by one using wind-driven fuel pumps late in 1917, although this was not initially adopted by American-built aircraft.

The otherwise inferior DH.9 brought the pilot and observer closer together by placing the fuel tank in the usual place, between the pilot and the engine.

While the crew arrangement gave good fields of view for the pilot and observer, it caused communication problems between the two crew members, particularly in combat, where the speaking tube linking the cockpits was of limited use.

The DH.4 proved a huge success and was often considered the best single-engined bomber of World War One. Even when fully loaded with bombs, with its reliability and impressive performance, the aircraft proved highly popular with its crews.

It was easy to fly, and especially when fitted with the Rolls-Royce Eagle engine, its speed and altitude performance gave it a good deal of invulnerability to German fighter interception, so that the DH.4 often did not require a fighter escort on missions, a concept furthered by de Havilland in the later Mosquito in World War Two.

David Hall’s 55 Squadron developed tactics of flying in wedge formations, bombing on the leader's command and with the massed defensive fire of the formation deterring attacks by enemy fighters.

Despite heavy losses the squadron continued in operation, the only one of the day bombing squadrons in what was named the Independent Air Force which did not have to stand down temporarily because of aircrew losses.

David was appointed a flight commander with the acting-rank of captain on June 18 1917.

His first victory came on July 27 when he and observer/gunner 2nd Lieutenant N.M.Pizey drove down an Albatros D.V out of control over Houthulst Forest, but the observer/gunner was killed in the action.

David was then paired with Lieutenant Britton, who was wounded by ‘friendly fire’ from a French SPAD biplane fighter over Ypres on August 20.

Next he was paired with a close friend, 22 year-old 2nd Lieutenant Edward Patrick Hartigan from Reens, County Limerick, as observer. He had joined the RFC on October 1 1916 from the Battalion of the Royal Munster Fusiliers.

They took part in bombing missions from September 27. On that day, they carried out two separate bombings in the Flanders region of Belgium, at Moorslede and Waterdamhoek.

They flew again on the 28th and 30th. Bombs were dropped on all four occasions.

On October 2 the 25 year-old pilot led a flight of five DH.4s on a bombing attack on the German aerodrome at Abeele, east of Roulers. The mission went well and all bombs were dropped, with some observed success.

On the return journey, however, while flying in formation at 16,200 feet over Roulers, the group was attacked from above by about 15 Albatros DV scouts led by Oberleutnant Rudolf Berthold, commander of the hunter fighter squadron Jasta 18.

They were seriously outnumbered, and a dogfight ensued that rapidly became confused.

Hall and Hartigan claimed four D.V. fighters shot down, and probable hits on at least six others. But two DH.4s were shot down and their crews killed, and a third crash-landed in enemy territory, killing the observer, while the pilot was captured.

The Oberleutnant claimed victory over one of the stricken DH4s, bringing his total to 28. He went on to become one of Germany's top aces, with a career total of 44 victories.

Following this action, David was awarded the Military Cross. The citation, published in the London Gazette of April 6 1918, read:

"For conspicuous gallantry and devotion to duty. While leading back his formation of five machines from a bombing raid he was attacked on eight different occasions by numerous enemy scouts.

“He himself shot down one in flames and another out of control, while his observer shot down two in flames. He has at all times, completed the task allotted to him, and set a splendid example."

The two men drove down another D.V on October 28, west of Roeselare, but their luck did not last.

On the morning of November 20, the first day of the battle of Cambrai, they set off alone on a weather reconnaissance mission. The conditions for flying were poor, with low clouds and mist.

The plane carried two oxygen sets, a negative lens bombsight, two 112 lb bomb racks and a camera. They had no wireless.

Nothing more was heard of the pair until a message was received at 5.30pm that the machine had been found wrecked at Les Alleux, with both pilot and observer killed.

The wreckage of their aircraft was discovered later in the day near Les Alleux, Ardennes, and they were buried side by side in the Longuenesse Souvenir Cemetery at Saint-Omer, France. David's name is on the Cenotaph in Hermitage Park.

DH4 A7568, not yet three months old, was returned to No.1 repair-park and was officially written off on November 26. It had a total flying time of 140 hours.