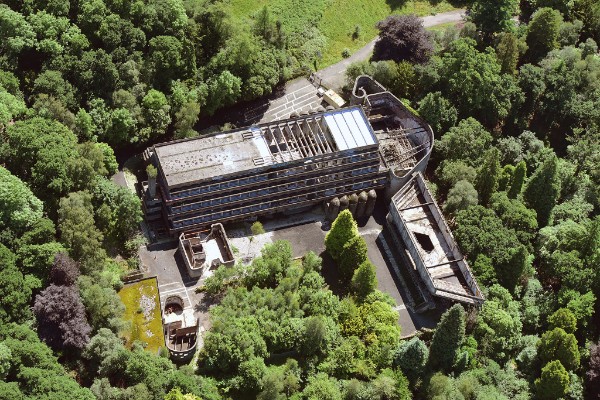 THE FUTURE looks bleak again for the former St Peter’s Seminary at Kilmahew, Cardross, as the charity seeking to restore it has folded.

Built as a college to train Catholic priests during the 1960s, the Seminary was only in use for 14 years and then was abandoned for decades.

But it is celebrated worldwide as a masterpiece of modernist architecture and its decay only added to its other-worldly charm.

For nearly a decade, the ground-breaking arts company NVA seemed to have found new hope, and a future, for the award-winning building.

But now that future is in doubt, after the announcement that the company will close in September.

NVA, an acclaimed and innovative company led by creative director Angus Farquhar, will cease operations months after losing out in the controversial Regular Funding decisions made by Creative Scotland, the arts funding body.

The culture secretary, Fiona Hyslop, has asked Historic Environment Scotland to study the former seminary, designed and built by the late Glasgowarchitects Andy MacMillan and Isi Metzstein in 1966, and report on its "long term options."

Ms Hyslop said she would like the building to continue to fascinate and inspire the public, and she said that she was very sad that NVA was to close.

She added: “Since its foundation 25 years ago, it has earned a reputation as one of the most innovative public arts companies."

The building is A-listed, and the World Monument Fund has it scheduled as one of the world's most endangered cultural landmarks.

NVA staged the Hinterland project in the ruins in 2016, and this year made a film with artist Rachel Maclean, but its long term £11m project to transform the ‘stabilised ruins’ into a cultural centre and performance space is over.

Since 2013, NVA spent £2.3m on the building, including removing hazardous waste and asbestos, the restoration of 80 vaults, improving paths, clearing away invasive plants, and woodland management in the 104-acre site.

The building it still owned by the Archdiocese of Glasgow.