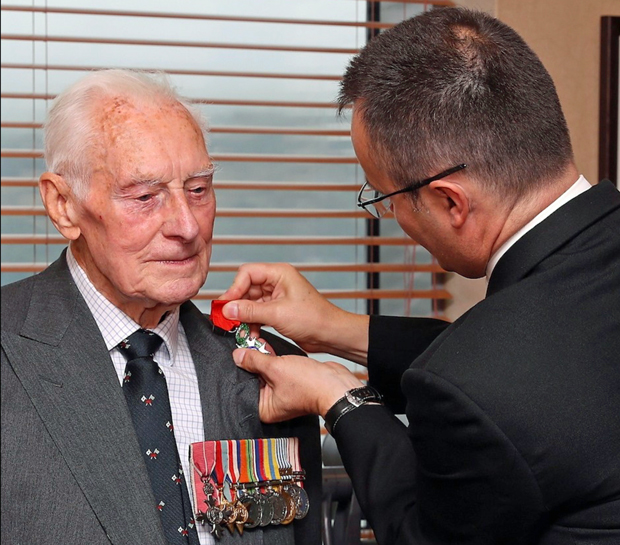 A VETERAN Royal Navy officer from Helensburgh has been awarded France’s highest order of merit for his service during the Second World War.

Harry Johnson, who is 95, was presented with the insignia of Chevalier of the Legion d’Honneur at the Clyde Naval Base at Faslane.

Harry, originally from London but a Helensburgh resident for some years, was presented with his medal by French Consul General Emmanuel Cocher on behalf of the President of France.

The French government is currently recognising the sacrifice of British service personnel who served during the D-Day operations, and around 5,000 medals have been awarded around the United Kingdom.

There to witness the award were some of Harry’s family and friends, among them his daughter Lindsey and her husband Stuart who had travelled from Dunfermline.

His first deployment, as a Lieutenant, was on HMS Enterprise, a Light Cruiser, and the first five months were spent in working up for the forthcoming invasion.

The honour conferred by the Consul General was specifically for Harry’s participation in the D-Day Landings.

HMS Enterprise fired over 9,000 shells during the landings and the bombardment of Cherbourg, and had to retire briefly to Chatham Dockyard to have her worn-out gun barrels replaced and to refuel.

Both the Captain and the First Lieutenant were wounded in the action while on the bridge.

Harry said: “I remember waking at dawn on D-Day and going on deck to find the sea completely covered with ships and crafts of every conceivable shape, size and purpose, for as far as the eye could see, and mostly heading for the beaches.

“The Enterprise was allocated to ‘Utah’ beach in the American Sector, and her first task was to soften up the beach defences and then to lay down fire ahead of the Allied advance.”

He added: “It is an honour to be presented with this award, but I also think of all those who died during and since the war and feel that many of them dclub.eserve this far more than I do.”

Harry left the navy as a Commander in 1971, joining the Royal Naval Engineering Service, an MoD civilian organisation in support of the navy.

He spent ten years at HM Naval Base Clyde, where he finished his career, retiring in 1982 as chief services engineer at Faslane. Even in his early 90s he played tennis every week at Helensburgh Tennis Club.

Andy Knox, Command Warrant Officer Submarines at the base, thanked Harry for his service at HMS Neptune and presented him with one of the few remaining HMS Neptune crests and a very special bottle of 18-year-old malt whisky.

“I was extremely privileged to be part of Commander Harry Johnson’s Légion d’Honneur presentation at HMNB Clyde," Andy said. "It was a truly humbling experience for all involved and a very proud moment for Harry.”