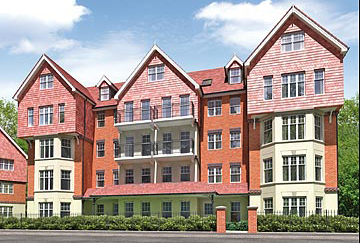 The original Baird Court was a house across the road from the railway station, 1 Station Road, and TV inventor John Logie Baird and his family moved there from Sydenham in January 1945.

The property lay empty for some years before it was demolished in 2007, and work began in 2008 on the new apartments.

Baird did a lot of his early work on TV transmissions from nearby Hastings, where he lived at 21 Linton Crescent from February 1923 to November 1924.

While there he carried out experiments that led in 1925 to the transmission of the first true television image, the painted wooden head of Stooky Bill at his workshop in Frith Street, Soho.