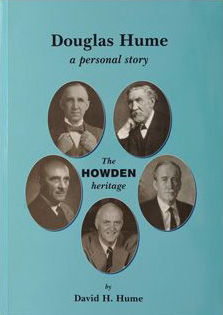 A RECENTLY published book provides an opportunity to support a cancer charity which operates in memory of a Helensburgh couple.

The Howden story re-told to help others was a three-year joint project by the late Douglas Hume of Helensburgh and his younger brother David, who is based in County Down, Northern Ireland. Now it is a fund-raiser for the June and Douglas Hume Memorial Fund.

After Douglas took ill in October 2008, David assumed authorship of the book, which tells the fascinating story of Howden and its growth from a small Glasgow engineering company founded in 1854 to a global business.

It is an account of four generations of family leadership of Howden, which celebrated its 150th anniversary in 2004. Douglas played a key role as managing director from 1964 to 1987 and he felt that the remarkable anniversary was a fitting moment to record his reminiscences.

The book is neither a biography nor an autobiography —  it is largely his reminiscences, along with the illustrated story of the company’s birth, survival and progress.

It has been published in aid of the June and Douglas Hume Memorial Fund, a charity originally created in memory of his wife June, who died at home from cancer in 2004. When Douglas died on April 26 2009, the family changed the charity to include his name.

The fund makes grants for help and equipment to allow terminally ill people to spend their last days at home.

‘Douglas Hume - a personal story: The HOWDEN heritage: by David H. Hume’ can be obtained directly from the author by contacting This email address is being protected from spambots. You need JavaScript enabled to view it., including your postal address, and making a donation.

Said David: “We have been gratifed that this is bringing in more for the charity than if we had had a fixed price, as people have been very generous.”

Donations can be made by sterling cheque to the June and Douglas Hume Memorial Fund and sent to the Scottish Community Foundation at 22 Calton Road, Edinburgh EH8 8DP.

Donations can also be made online by going to: http://scf.workwithus.org/fundraising/donate.aspx?page=4957 and following the instructions to Donate Online.

Please convert the sum you wish to give from your own currency into pounds sterling (GBP). Enter this amount, and include ‘For the Howden heritage book’ in the message space. All gifts will be gratefully received and acknowledged electronically by the SCF.

The book is also available at Bookworms in East Clyde Street, Helensburgh.