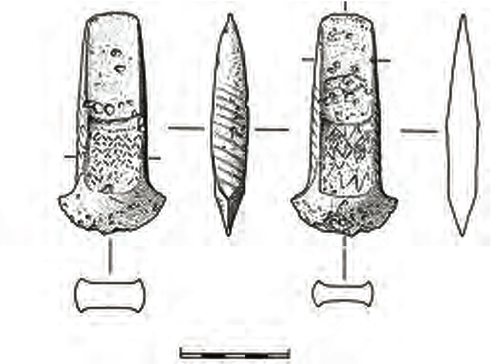 AN important find in Cardross from the early Bronze Age was featured in the annual Scottish Treasure Trove report for 2008-9, published in August 2009.

Under Scottish law all portable antiquities of archaeological, historical or cultural significance are subject to claim by the Crown through the Treasure Trove system and must be reported.

The report by the Queen's and Lord Treasurer's Remembrancer includes the decorated early Bronze Age flanged axehead of around 1700-1800BC found in the village, and calls it “an excellent example”.

The report states that it is a signiﬁcant addition to a relatively small number of similar ﬁnds from the west of Scotland.

Like Neolithic stone axeheads Bronze Age axeheads also had both ritual and practical purposes and the detailed decoration on this example suggests it was a ceremonial or ritual object. It is now in the safekeeping of Kelvingrove Museum in Glasgow.