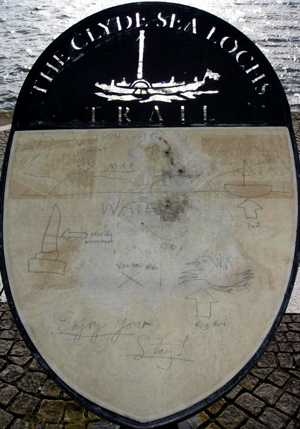 ONE of the more embarrassing aspects of Helensburgh seafront is a long neglected panel at the foot of John Street which ought to show details of The Sea Lochs Trail’ and is one of a series erected some years ago from Dumbarton to Arrochar.

The information area of the panel is now completely blank, but Helensburgh Heritage Trust chairman Stewart Noble discovered that there has been a D.I.Y. effort to provide information.

Stewart, who took the picture, says: “I don't usually approve of vandalism, but I have to say that this instance did amuse me. I hope that someone in a public authority somewhere might be shamed into action!”

‘Water’, ‘monument’, ‘you are here’ and ‘Enjoy your Stay!’ are among the new inscriptions on the panel.

A few months ago the Lomond and Clyde Tourist Association and the Heritage Trust looked into the possibility of replacing the panels. But there are ten of them and it was going to cost some £1,000 each.

As neither organisation could afford this and no grant funding appeared to be available, the idea was put into cold storage. If no-one can afford to repair the panels, perhaps storage might be the best idea rather than leaving them as monuments to neglect.